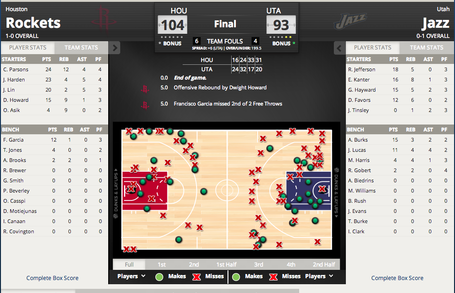 Recap: Coach Corbin made some changes to the starting lineup replacing JLIII with Tinsley. It was obvious that Tinsley and Favors were running the pick and roll to get Dwight Howard out of the paint, which allowed other Jazz players to get rebounds and easy baskets.  Enes Kanter played well without the ball, and helped on the weak side defense. The Jazz pushed the tempo and took an eight point lead 24-16 into the second quarter. The Second quarter similar to the first. The Jazz seamed faster, hungrier and to be honest, better than the Rockets in the first half. Burks, Harris, and Jefferson helped push the lead to 16 at halftime. Things escalating very quickly in the second half when Houston went on a 23-6 run to tie the game a 60 with five minutes left in the third. Houston fought all the way back to tie the game at 73 by the end the third. The Jazz once again did not execute down the stretch, (signs of a young team). To be honest, I am more disappointed that we gave up a huge lead than I am about the loss. Houston played a two man game in the fourth and Harden led the Houston Rockets down the stretch.The Jazz were outscored by 27 points in the second half, and ran out of gas at the end of the game. We are now 0-3.

The Pick and Roll- They ran this with Tinsley and Favors, Hayward and Favors, Burks and Harris. This is huge for Trey Burke. Why? Because Burke is an above average PNR ball handler while our bigs, at this point, are below average. Giving our bigs PNR "practice" or reps will allow them to get better and understand their options before Trey Burke gets back.

Jefferson - 18 points and some good defense. He was the leading scorer and should have probably had more minutes because of how well he was shooting.

Deflections- I wish this were a real stat, well a stat that was kept officially. I felt like the Utah Jazz were in almost every passing lane, and the defensive intensity has been

Turnovers- I really don't know what to say about the turnovers, other than giving your opponent 15 free possessions a game is dumb.  A lot of our turnovers are unforced, those are the ones that hurt.

Letting Parsons beat us- I want to give Parsons some respect... however, he was allowed to many easy baskets in the lane. I understand our bigs didn't want to leave their guys, but on more than one occasion he waltzed through the lane for the easy bucket.

Assists- The Jazz had 12 assists on 34 baskets we need to be closer to 20 to be a good team. Assists show ball movement ball movement show

Play of the Night: