Another day in the NBA season, another game. Lucky for us Trey Burke will play tonight! Our #9 draft pick that we've all been waiting to see will make his NBA debut tonight against the New Orleans Pelicans.

The Return of Trey Burke and Jeremy Evans:

I hope we temper our expectations a bit for Trey's return. Trey hasn't played in over a month so he is bound to be a little rusty, he is coming off the bench (and we know how our second unit plays) and he has a coach who maybe isn't the most patient with young players.

Corbin said he'll "ease" Burke back into the rotation, and the 21-year-old will have some unspecified time limitations.

So does Burke have limited minutes that Corbin is not telling the media or does he not have exact minutes that he can play and Corbin will play him by ear?

Burke is excited about his return saying:

"I had butterflies every game in college, so I know I’ll have butterflies tonight. But I think that’s the excitement coming along. It’s not about being nervous, it's about going out there and trusting your teammates."

Burke also told Jody what he learned by sitting on the bench:

"Just seeing the confidence in other guys, seeing some of the confidence in some of the other best players. Seeing how they go out there and they’re not worried about nothing, they’re just focused and they know the scouting report," he said. "I think that’s the biggest thing from not being able to play. There’s always lessons you can learn. There's always areas you can grow in and I think that I've grown."

I am glad that Burke is learning from the best in the league and not necessarily from how's played point guard for us ;)

Jeremy Evans is also returning tonight. I hope Jeremy can provide some nice defense and a spark off the bench. I think he is a better option than Ty Cor Mike Harris.

Lets look at the injury report (thanks to Amar) that now does not include Trey Burke and Jeremy Evans. We do have a new player on the list, Marvin Williams. Williams stayed in Utah to get fit for a customized face mask and have a procedure done on his broken nose. Jazz PR said that Williams will meet up with the team in Dallas on Friday.

The last time we met the Pelicans, the Jazz earned their first and only win of the season. If you remember MAD Marvin lead the charge. We won't have Marvin at our disposal tonight and I imagine the Pelicans want revenge. They don't want to be the ONLY team that has lost to the Jazz, let alone twice. 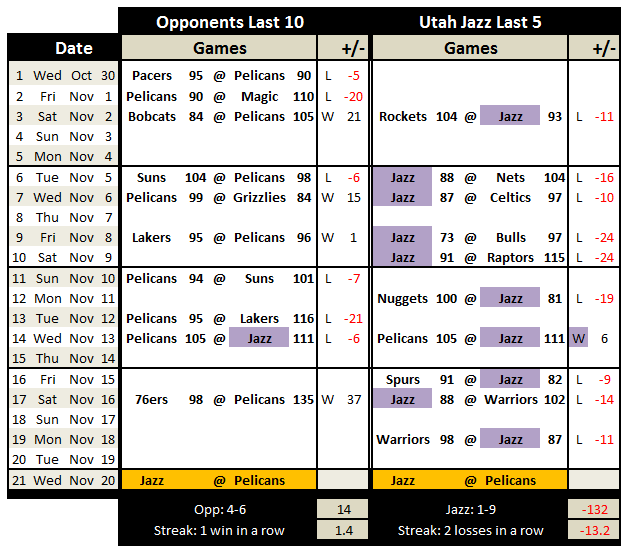 Note: Pelicans lost their game to the Jazz on November 13th. They have a one game winning streak and are 4-6 in their last ten games. (Also not included on chart: Pelicans played the Orlando Magic on November 1st, losing 110-90 on the road)

[Ed. Note: Amar here, Diana was good enough to notice my mess up. So the image above has been changed to reflect reality. Her comments will remain as is though. Also of note, here are the 10 man rotations for each squad! Enjoy.]

The Pelicans are 4-1 at home, the Jazz will not have it easy tonight. We haven't played well in New Orleans since the Deron Williams-CP3 days.

I hope Trey Burke gets a lot of minutes, a lot of minutes with the Core Four. I know he is our best option even if he is just coming back from injury. I hope we see minutes tonight from our players that represent the goals that Dennis Lindsey set at the beginning of the season

How would you like to see Dennis Lindsey's three D's played out with regards to tonight's game?