Dennis Lindsay has said that the focus of this year will be: Development, Defense, and Doinkitude (actually, I just can't remember what the third "D" is ... but I like Doinkitude).

Personally, I was kinda excited about this. You see, skill development ... making it happen, tracking it, and evaluating it ... that's what I do. I'm a 5th grade teacher, and this kind of thing is really intuitive. So I decided to track some data for the Jazz this year. Specifically, I'm tracking how the young players "develop," i.e. I'm tracking their skill development. You will see these progress reports for every young player in the "development" stage about every eight games.

I got data from the first 8 games, which serves as a baseline of performance.

Then I tracked data for the next 8 games to see what progress occurs during that time. There is a major disclaimer: sometimes players go through random hot and cold streaks. When I'm only looking at eight games at a time, this can have a major impact in the data. However, I believe as long as I do this for the entire year, we will be able to track overall trends, even with the randomness that happens.

Get ready, because this is going to get ugly.

In the first eight games, Gordon established a pretty fantastic baseline of performance. It had me feeling downright giddy. Here's what we were seeing (stats are per-36 minutes):

In case you were wondering, that is a pretty fantastic start. The True Shooting is okay ... but with those assists and rebounds, plus accounting for Hayward's rise in usage and minutes ... well, I felt like this was a very successful baseline. "If he's starting here," I thought, "where is he going to end up?"

Well, where he ends at the end of the year is, of course, up in the air. But his second eight games show ... well, see for yourself:

To say he's cooled off doesn't even come close to capturing it. His passing continues to be stellar, and his steals and blocks are decent. But everything else: literally everything has been pretty bad. His shooting is horrific, his rebounding is down, but his turnovers and fouls are up.

Unfortunately, I didn't get Hayward's shot chart at 8 games. So I only have the totals from all 16 games. So it doesn't tell us right now what has changed from the first 8 to second 8 games. But here's what we're looking at with him for the season thus far: 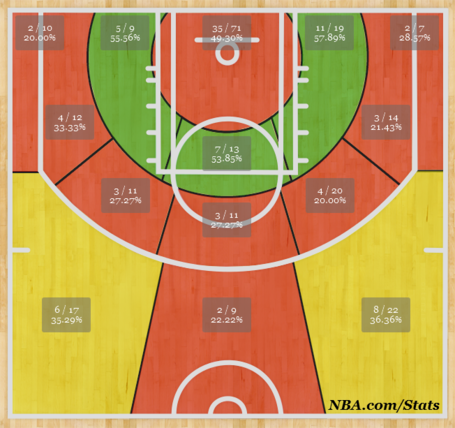 You see here, he's above league average only in that tweener area between mid-range and close. I really wish I had taken a snapshot at game 8 so we could see where his percentages have changed. But, alas, I did not. But never fear: I will have these in the future to see shooting percentage changes.

Here's a look at shot distribution: 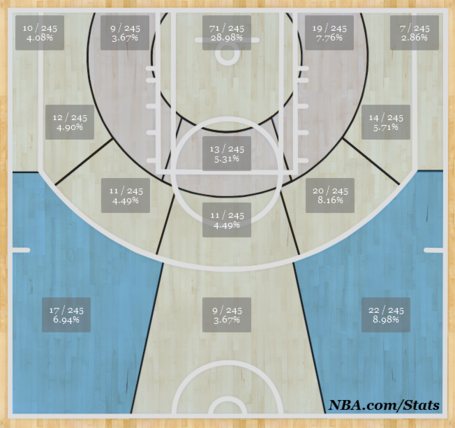 Of note to me: the number of shots at the rim and total long-2's is about even: 71 to 68. Even more than the shooting percentages, I wish I could compare this chart to what it looked like at eight games: Has he gone cold, or has he been shooting different types of shots recently? Unfortunately, I don't know.

In fact, Hayward shows a particular problem: he has taken roughly equal shots (71 vs. 68 vs. 65) at the rim, long 2's, and 3's. Unfortunately, he's below average from all three of those areas. The only place he's above average, the tweener area, is where he takes by far the least amount of shots (41).

Again, I really wish I could compare this to what it looked like at eight games (when Hayward was playing rather terrific).

If I had a student who started strong, and then suddenly in the second half of the first term had his performance fall off the cliff, I would be very concerned. I would really want to find out what is going on. In education lingo, I'd start putting together some serious interventions.

Since I am not the coach, it's very difficult to say exactly what is the problem. It's hard to say what has changed.

Maybe he's getting worn out: he leads the league in total minutes right now and has played 37 per game (11th in the NBA). Maybe defenses are figuring him out, and he needs to adjust. Maybe the constant losing is killing him. Maybe the game plan is moving away from his strengths.

Maybe a lot of things.

Whatever the reason, it's clear that right now Hayward's NOT trending in the right direction. He's performing astonishingly worse right now than he was at the start of the year. If development is the goal, then the goal is not on the fast-track to being accomplished.

I hope the team can treat this with the kind of urgency it warrants. This isn't just a tough couple of nights shooting ... this is a drop off the cliff. You don't fix this by saying he's gotta #KeepGettingBetter.

I'm a huge fan of Gordon Hayward, and I really hope things can get back on track. I was so thrilled with the baseline, but it's been a rough drop off since then.

We'll see what happens over the next eight games.