Since this season, according to Dennis Lindsey, is about the 3D's (Development, Defense, Discipline — I looked up the last D — I decided to track player development. As a teacher, tracking this kind of data is fundamental to what I do, so it felt like a natural thing for me to do at SLC Dunk this year. Basically, we'll see how much that first D is being accomplished.

I really like Alec Burks, and I have spent the past two years defending him and pleading to the universe that he needs to play. I like his ability to take contact and still be in position to get a decent shot off. I like his swagger. I love how he can pull off a major dunk and not react, as if he's saying: "Whatever. I do that all the time. No need to make a big deal of it."

Well, I should be clear. I liked these things in years past. This year, it's been hard to see what I liked about Alec Burks. It's been a rough start. And then, like Gordo, it's been worse recently.

The "Progress" of Alec Burks

Alec had, of course, a nice first three games. It's been tough since then. Here's what he put up for the first eight games total (stats are per-36 minutes):

I wasn't exactly giddy about this, like I was with Hayward's first eight games, but somethings were encouraging. As much as Alec is accused of being a ball hog, he had a decent assist number (by my count, there are 12 SG's currently handing out 3 or more assists per game). He was still rebounding pretty well. His steals were a nice contribution.

Although he had further to go than any of the other C4, it seemed workable to me. There were two obvious things he needed to improve on during the season: shooting efficiency and cutting turnovers ... two things that I felt reasonable to hope could improve with more experience. It is a familiar story to have a player put in a new, bigger role and struggle with shooting percentage and turnovers at first but slowly work through the struggles.

This is what I had hoped to see.

Instead, this is what Alec has done the past eight games:

That is really bad. Like Hayward, at least we can point to one thing that's #GettingBetter: assists are up. And I suppose we can celebrate the slight drop in turnovers. But what a disaster of regression we see in everything else.

Like with Hayward, I didn't think to get shooting charts after eight games, so we can't see where percentages or shot distribution have changed in the more recent games. But we can learn a bit from what we see right now: 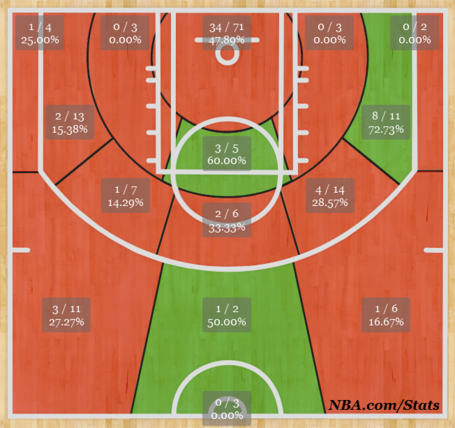 Using some pretty advanced math, you can see there are three zones in which Burks is above league average. And bunches of bunches in which he's struggling. 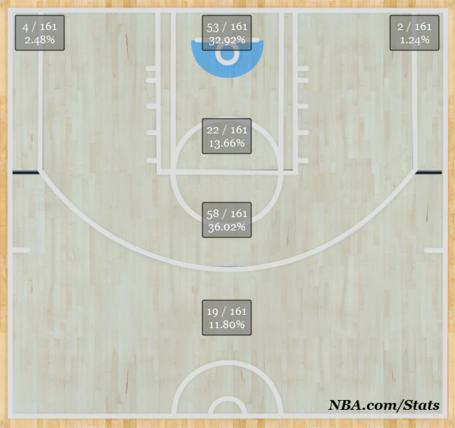 In some ways, the distribution is actually better than Hayward's: More shots in the paint and at the rim than mid-range and long 2's. However, Alec is clearly not scoring effectively with that decent shot distribution. He's struggling everywhere.

I know not everybody believed in Alec Burks in the first place.

It is regression. And in a season that is supposed to be focusing on development, regression should be considered a huge problem. Again, were I to see this in one of my students, I would be freaking out. Were I to see this kind of regression in multiple students ... my job would be on the line. And I would have to have a major list of changes I am doing in order to stop the regression.

I'm not a coaching expert, so I can't say exactly why the regression is happening. Nor can I say what should be done about it. But I can see a problem. And I can see that something has to be done now.

I really like Alec Burks. I really want him to be successful, because I think his talents, if put together right, can make him a very good player ... someone who can help teams win.

But he's not on the way to reaching it right now. He's going the other way in a really bad way.

And it's going to take more than some #KeepGettingBetter platitudes to make a difference.