Since this season, according to Dennis Lindsey, is about the 3D's (Development, Defense, Discipline — I looked up the last D — I decided to track player development. As a teacher, tracking this kind of data is fundamental to what I do, so it felt like a natural thing for me to do at SLC Dunk this year. Basically, we'll see how much that first D is being accomplished.

I've re-evaluated what I think of Enes Kanter more than any player I can remember. I thought drafting him was a scary thought ... how often does it work out well to draft a guy who hadn't played organized ball in like 2 years? Then I thought that maybe it could turn out lucky. Then I saw him as a rookie, and I felt like being a solid 12-14 ppg and 10-12 rbd guy was his likely future ... which would make Kanter a steal in that draft. Have you seen Derrick Williams?

But the I said something that makes me feel smart even today: that we wouldn't have a clear idea of what Kanter could do offensively until his 2nd year. And what a year, offensively. Which made me say one of the things that was less smart: that the instant Kanter averages 35+ minutes a game, he'd be scoring over 20 ppg.

Which was a funny thing to say, since he had never put up 20 points per 36 minutes. But, hyperbole aside, I felt like of Kanter and Favors, Kanter would probaby be the more effective scorer. Athleticism is an issue, but sometimes a guy simply has soft hands and a really nice scoring touch. That, to me, described Enes Kanter.

And so I was thrilled to see what he could do this year, with a full-time starting gig.

The Progress of Enes Kanter

And by the way, we're finally going to see some actual progress today. That's why I saved him for Thanksgiving.

Here's what Kanter was doing the first eight games of the year (per-36 minute stats):

That's not bad. Obviously, the rebounding is not what we had been hoping for. But otherwise, that's pretty much exactly his per-36 minute stats from last year ... with a slight decline in shooting efficiency. But considering the jump in minutes, that decline is both expected at first and not nearly as big as often happens—even with good players. (See Paul George's shooting last year).

Now let's see what Enes has been doing the next eight games:

Instead, this is what Alec has done the past eight games:

So much to discuss here.

First of all, the drop in scoring totals and efficiency is mostly due to a couple of crappy FT-shooting games (57% over the past eight games). So it's not really a clear regression in scoring effectiveness like we saw in Alec and Gordon.

Next, look at the rebounding. I think that his rebounding has been one of the biggest gripes fans have had with him this year. But it went up during the second set of eight games. And more importantly, his defensive rebounding went WAY up: 3.2 per game for the first eight, 6.5 during the second eight games. Good job, Enes. That's the kind of thing I had hoped to see as I broke the season down into eight game chunks—little signs of specific improvement as we go.

Finally, it shows that despite its prevalence, and decent overall usefuleness, you can't take PER (or Wins Produced or Win Shares or any all-in-one stat) as gospel truth. Look at Enes's production overall: scoring down, rebounds up, assists same, steals up, blocks up, fouls up, turnovers down ... does that really warrant a drop from 16.8 to 11.9 in PER?

I don't know. Maybe. But I see a guy who has been slightly less effective overall because of scoring efficiency, but with some notable areas that have been improved.

If you didn't see that PER number, would you call it clear regression?

But what about defense?

Well, we know that this has been a struggle. But it's also unfair to yell at only Enes. This is a team-wide problem that should baffle us. For two years, I've seen Kanter be a decent defender (just like I've seen it from Derrick, Gordon, and Marv). So, for now anyway, I'm calling it some combination of dealing with the huge jump in minutes and a team-wide problem in defensive game plan.

Here's a look at Kanter's shooting efficiency over the first sixteen games: 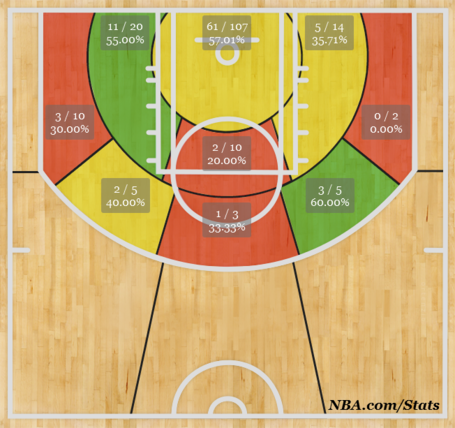 And his shooting distribution: 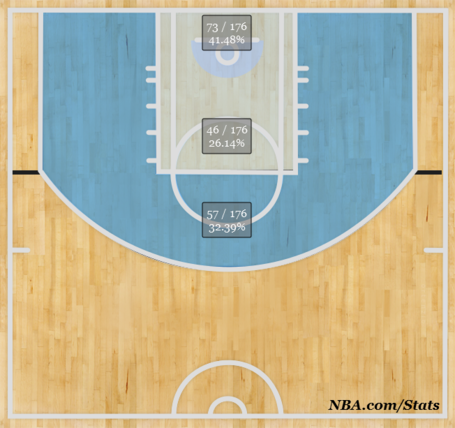 One of the things I loved about Kanter last year was that he was both above average from all distances, and his distribution matched his scoring efficiency: most shots from most effective areas.

He hasn't been so universally above average in his shooting spots this year, but he is still showing a nice distribution: still most of the focus is on the areas that are higher percentage.

More than Hayward and especially Alec Burks, I feel like Kanter is on the right track. I'm happy about this. There's still a long way to go, however.

Enes Kanter has, in my opinion, probably gotten a lot more grief than he deserves this year. I've seen some pretty negative takes on him on Twitter and in comments ... in reality, he has played decently. And one major area that was surprisingly poor ... defensive rebounding ... has been showing signs of improvement.

He certainly has a lot to improve. And I am eagerly hoping for some defensive improvement. But there's honestly been plenty to feel okay about thus far.