Share All sharing options for: The Downbeat #1189 - The Story, So Far Edition

We're 3 games into the season and I think we can start drawing some conclusions about teams... or not.

Bold- Teams that were predicted to be the worst in the league.

Defense is how this team is supposed to be evaluated this year, so lets look at some defensive stats 3 games into the season:

Opp FG%: The Jazz are holding their opponents to 42% shooting, good for 8th in the league. Some of this could be rust, but its worth keeping an eye on

DRtg: The Jazz are right at the current league average of 103 pts/ per 100 possession.

FT/FGA: This one is ugly. The Jazz are still hacking away, with the second worst ratio in the league. Their opponents are shooting a free throw for every 3.25 field goal attempts. That's really bad.

Opp 3P%: Part of that lowered eFG% is that the Jazz are guarding the 3 point line well. Holding opponents to 33% shooting on 63 attempts.

All said, the Jazz are probably doing what most expected. The defense is alright, but the offense is struggling. Part of that reason? Shot distribution. The Jazz are taking way too many low percentage mid-range jumpers 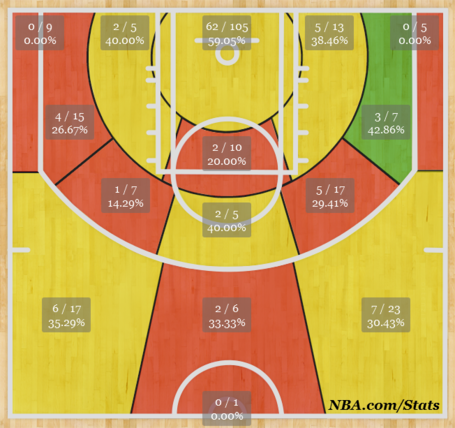 In case you missed it, Henry Abbott of ESPN's True Hoop blog sat down with the great John Stockton. Its crazy to see Stock getting so much attention and actually being.... okay with it? Take a look

The Jazz are off until tomorrow night, when they hit the court in Brooklyn, followed by Boston on Wednesday, and Chicago on Friday. Where do they get their first win?