The Downbeat #1192: The Elephant Has Left the Room

Share All sharing options for: The Downbeat #1192: The Elephant Has Left the Room

That’s not to say that Stevens never showed his angry side. "He kicked us out of practice a couple times when we weren’t doing things the right way," Hayward said. "He is extremely detail oriented and when you’re not focusing on those details, he gets pretty upset about that."

You can see from the videos that these two men have great respect for each other.

I love being a Jazz fan. Why? Because of stuff like this. Andy over at Salt City Hoops wrote a short summary on the courtship and eventual marriage of Ashly and Slcdunk' s own Prodigal Punk (Dustin) . With out going into to much detail, I can share my appreciation for meeting someone through social media/online. It has been fun to watch these two grow into a couple. Best wishes to you two.

Truth Speak and sample sizes. Statistically the Jazz are not looking good. See Below 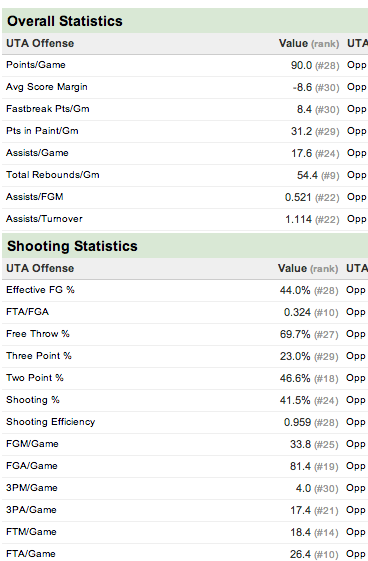 The Jazz are number one in the league in offensive rebounds and OR%, but are in the bottom five in a lot of the other categories. As you can see from the above picture, we are struggling with FT's, 3p%, ppg, and fastbreak points. I think a lot of these struggles can and will be better when Burke gets back. However some of these are individual stats that are collectively hurting the team. For example, Hayward is shooting 16% lower this season than last.

It should be apparent to most, if not all, Utah Jazz fans that we are not going to win a lot of games. My game by game prediction before the season started was 33 wins, which is much higher than my season range of 23-27 We have good players, which in time, will play better individually and collectively. I don't like losing, or being a diehard fan and watching my team lose, but can tolerate it for the/a chance to win more games sooner. If you are reading this, than I consider you a die hard. The Jazz are off to their worst start in nearly 40 years. For most Utah Jazz fans this is uncharted territory. This is uncomfortable. This is not easy. Watching your team lose sucks. How are you coping?

After the first five games has your opinion or end of season outcome changed or been confirmed... Explain why in the comments.