The Downbeat #1193: The Young Team Edition

Utah Jazz play the Chicago Bulls today, the Utah Jazz are a young team, and when will they win?

Share All sharing options for: The Downbeat #1193: The Young Team Edition

Its gameday! The Jazz face Carlos Booooooozer and the Bulls tonight. We of course are 0-5 and the Bulls are just 1-3. So maybe we'll have a chance to get to our first victory tonight.

I imagine Boozer wearing this around the house (watching out for gym bags of course) waiting until game time. 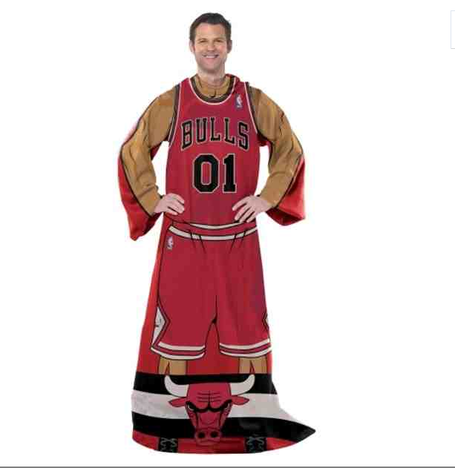 So predictions for the game today:

This point is focusing on how people say our team is young.

Well, I think the big picture takeaway right now is, is that, as we suspected, we have a young team.

They are working hard. They are learning. They’re growing each game. There’s some things that we wish we wouldn’t have to keep learning, unfortunately, but they are young…

This is part of the growing process, with a young team, that we knew we’d be going through. And so, I would say, overall, I’m, I am content with the growth and the progress that we’re making.

They’re playing hard. Our fan base is really enjoying it. We’re seeing some great basketball. A lot of high energy, and it’s been really quite fun even though the winning, the losing is not fun, but at least seeing the effort, I think, has been very rewarding.

I did a search on Jazzfanatical and in a four day span the word young was used 17 times to describe the team by Randy Rigby, Coach Tyrone Corbin, Dennis Lindsey and players. Since our first game they have used the word young 32 times (that Moni has transcribed)

I know it seems weird to do such a search but its something that I have been thinking about since the Jazz decided to rebuild. I respect what the Jazz are doing, it seems like we all do. Its been time to do it it was time to do it since the Deron Williams trade, I am glad Dennis Lindsey has the gumption to do a proper rebuild (and say the word rebuild)

What I don't like is that the Core 4 are being treated like and talked about as if they were rookies. They are not rookies. Gordon Hayward and Derrick Favors are in their 4th years and Enes Kanter and Alec Burks are third year players. There is no reason that we as a team and a fan base should be using the youth excuse. Deron Williams as a 2nd year player lead us to the WCFs with 5th year players Memo Okur and Carlos Boozer. I don't remember the Boozer-William lead teams ever using youth as an excuse.

Maybe we can use the experience excuse but we don't bring that up because then maybe that would bring thoughts that the Core Four weren't developed properly their first years with the team.

After every game Jazzbasketball writes an amazing recap. Make sure to make Jazz Basketball a part of your daily Jazz reading.

JBB broke down the Celtics game into three main parts. (Jazz run, Celtics run, Jazz run) If you want to understand the X's and O's more check out his recap. These were his concluding words on the game which I think applies to the Jazz as a whole this season (and JBB does too)

The Celtics’ roster is dreadful, yet they beat the Jazz by double-figures. Furthermore, looking at the talent-level of the Magic (who beat the Clippers) and Suns (who last night took the Spurs down to the wire in San Antonio) makes one thing clear. You can be competitive and win games with mediocre talent – but you must have sound strategy and execution.

Ty Corbin has been fairly decent at handling in-game adjustments and lineups this season, but for the Jazz to win games he needs to be good. Waiting 10-minutes too long to make adjustments will lose this team games, even against opponents who have less talent than the Jazz. Whether that’s completely fair to Utah’s 4th-year coach or not – it’s the nature of the business. As Corbin says quite often, it is what it is and nobody’s going to feel sorry for him.

Coach Corbin is now in his 4th season.as head coach and as Peter pointed out in this tweet he is 71% complete with his contract.

No more excuses of rough circumstances. The Jazz have added so much to help Ty and the players succeed. A quick list off the top of my head:

2) Karl Malone is working with the bigs

3) John Stockton worked with Burks and Burke over the summer.

4) Dennis Lindsey is taking mad notes during the game and sending them to Ty. (via mick.mcgirr in his post My Time with Dennis Lindsey)

I am excited that Dennis Lindsey is making these changes. It shows that Lindsey cares about winning. Lindsey wouldn't make these moves if he wasn't looking for growth and development but also wins (maybe not this year but more wins in the future). We know we have talented players, we have never had this many lottery picks ever on our team, as we do now. So we have the talent, and so many helps, we just need to see the improvement.

utahjazz.com is doing something new after games. Its called "The Rundown", I like it a lot. It has highlights but broken down into 3-pointers, dunks, and blocks; it has the box score, the AP story and more all on one page with a very sleek design.

A small peek at it: 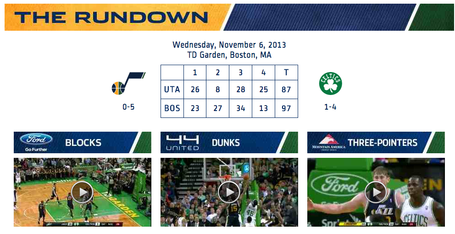 The Denver Nuggets beat Paul Millsap and the Hawks last night for their first win of the season. We are now the only team that has not won a game yet. Its okay no stressing from me. Lets guess when we get our first win!