Both teams started out slow, and the game was tied 0-0 at the first timeout. The Jazz forced the Kings to call a timeout at 3:36 mark (22-13) when Kanter hit a 18 footer of the pick and roll. The Kings finished the quarter on an 8-0 run bringing them within three 26-23 Jazz. Brandon Rush hit his first three of the season to give the the Jazz a 38-29 lead. Kanter showed his improving footwork and Rush blocked a one on one fast break bucket before the under six timeout. Jazz led 43-32 at this point. DMC stayed on the bench and the Jazz had their way pushing the lead to 58-46 at halftime. The second half continued right where it left off. The Jazz pushed the lead to 20 (79-59) at the 6:29 mark. The Kings head coach got a tech with 2:50 left in the third as he saw hit team fall down by 25 points. The Jazz had a 24 point lead as they headed into the fourth quarter (96-72). The Jazz continued to play well during the fourth quarter. The lead fluctuated between 20-25 throughout the rest of the game. The final score Utah Jazz 122 Sacramento Kings 101.

1) Favors Aggressiveness. He frustrated Cousins early and often. Defensively he was in position and helped anchor the paint. Offensively, he was active on the boards and it was apparent he was trying to score early. He had some great shots in third quarter as well a 10 foot jumper and huge dunk on the PNR from Hayward.

2) Passing The Utah Jazz had 19 assists on 24 made baskets in the first half. Extra passes, PNR, interior passing, hitting the curl. It's amazing what happens when teams hit 50% of their shots.

3) Shooting from three was unbelievable... no really shot chart below. 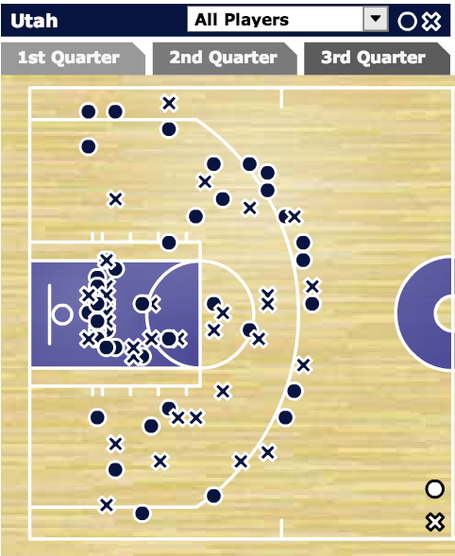 1) The end of the first quarter. As follows.