Share All sharing options for: A Modest Trade Proposal

The more I've been thinking about our team, the more I think depth is the major problem. So I started looking around the NBA to see what pieces we could pick up. It took some time, but I think I found something serviceable.

You'll notice that it isn't perfect: I'm not sure Austin Rivers would be the answer at backup PG. But that's okay. Sometimes it takes a couple trades ... not just one ... to get all the pieces you need.

So, here's a fairly realistic trade that I think the Jazz could get done: 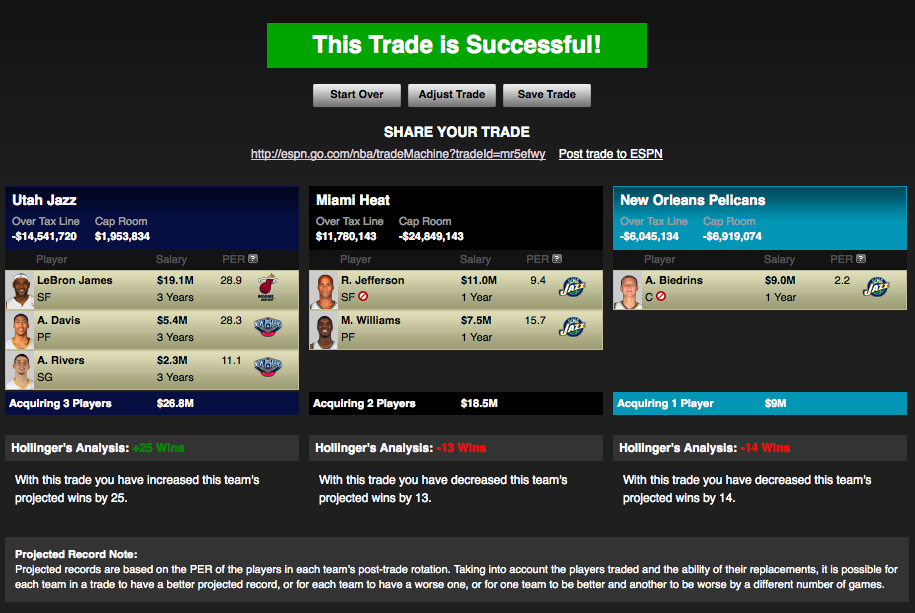 I know most people will look at this and just assume it's a crap trade that totally screws the Jazz. But bear with me.

Between LeBron James and Anthony Davis we would end up with a couple nice pieces to give the team some depth off the bench.

I know that LeBron's production doesn't match his paycheck (and neither does Anthony Davis's), but the Jazz salary cap situation makes it so it wouldn't hurt them as much as other teams. Besides, we all know how much easier it is to play against bench players. Their efficiency would be bound to go up if you keep them to about 20 minutes per game and focus exclusively where they would have a match-up advantage.

Honestly, I could see LeBron putting up about 13 points off the bench, and Anthony Davis may be able to chip in another 10. If you can ignore all your concerns just for a moment, you'll see that we'd suddenly have a pretty decent 20-25 points coming off the bench. Sure there will be consistency concerns, but that's what you have to accept sometimes.

After all ... we're talking about the second string here.

Why Miami Does It

I think it's safe to say that the "LeBron Experiment" has been a failure at this point. Remember the "not four, not five, but six or seven championships" thing? Well here we are, literally YEARS LATER, and where's the six championship rings?

Sometimes it's better to just cut your losses and bail out. We'd be giving them that opportunity.

Aside from that, look at what they'd be getting: Our starting PF AND starting SG! Seriously, we'd give them two starters for a guy we plan to bring off the bench. I'm not sure Miami could get a better deal than this.

But if Miami does balk, we do have a lot of picks that we could throw into the deal. I'd be willing to part with GS's 2015 second rounder.

Why New Orleans Does It

Flow. It's all abut the flow. Young guys don't help it. Savvy vets do. And there's no savvier guy than Andris Biedrins. He's so savvy that all the stuff that can't show up in the box score completely overshadow those contributions that do. It's really like getting two guys in one: the box score guy and the intangibles guy who specializes in flow.

Because let's be honest: the Pellies' offense isn't where it ought to be (25th WORST offense in the NBA right now). With some flow from Biedrins, that number is bound to start getting down to 0.

Why the Jazz Do It

Sure they give up a lot, but they do add some depth. Having a nice versatile SF and decent backup PF/C can make a big difference. It will also give the starters some piece of mind that when they go to the bench there's someone at least somewhat competent backing them up.

Really, it's a Win Win Win as far as I can tell.