Share All sharing options for: The Class Act Edition - The Downbeat - #1222

The Lakers produced this video for Kobe's return.

I love little moments like these when a bit of great humor seeps out from the Jazz.

The Jazz have said they will not be commenting on Sidney Lowe's guilty plea for tax evasion.

Here's what Randy Rigby had to say during his interview on 1280 yesterday:

We have no comment on what happens for in–our individuals in a personal matter. I will say, Sidney Lowe is a class act and we know that he’ll handle it and take care of these matters.

So, there you have it. 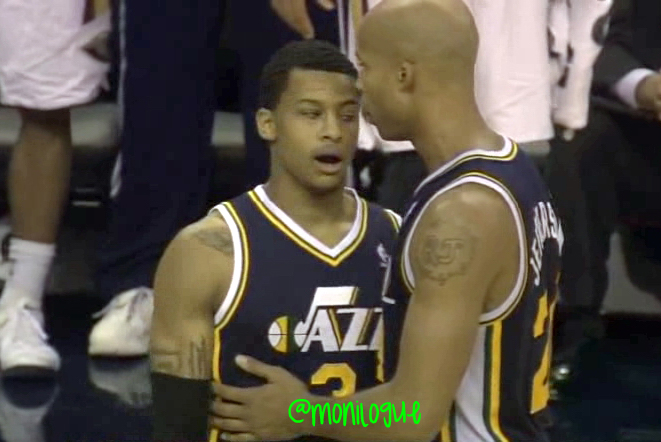 Following the Jazz's most recent loss to Portland, Brandon Rush appeared unthrilled with his lack of playing time:

Rush got in the next game at Sacramento, and played 20 minutes. It emerged today that his PT came after he had a talk with Tyrone Corbin before the game.

He played again in games last week against Indiana and Portland but soon found himself out Utah coach Ty Corbin’s rotation. "It’s been really frustrating because I’ve worked hard," Rush said. "I wanted to be able to get some minutes and help the team out." Rush and Corbin met Wednesday morning before the team’s game in Sacramento to talk about Rush’s frustrations. "I had a good talk with Coach," the shooting guard said. "He let me know what the deal was." Corbin’s message: "I just wanted him to play, play relaxed and play without apprehension."

[H/T to Diana for the poll question]

The Jazz are famous for (over)using "Simply the Best" on celebratory occasions.

Side Note: Two years ago, I uploaded video of John Stockton's retirement speech to Youtube. As of three months ago, it had received over 50,000 views. Three months ago, Youtube informed me that the video was now blocked worldwide because of "Simply the Best" playing in the background as Stockton walked out of the arena. Youtube suggested that I edit the video to make it playable again, but when I tried to crop off the end of the video I was informed that the video could not be edited because it had received too many views. The only thing I could do was re-upload a new, cropped version of the video. So anyway, "Simply the Best" simply won't do. (Joke via Diana as well)

Aaaaaaaaanyway, what song do you think they should play at Jerry's ceremony on Jan. 31? A song that represents Jerry and his success and what he means to the franchise?