We got the belt! And we ain't never givin' it to FREAKING NOBODY!

I really like it when the Jazz win. I also really like it when it's on the backs of the young players. Those who are mostly interested in a dream draft pick this year get worried. But not me ... this kind of a game is, to me, what the season is supposed to be about.

For a while, though, it did look like a dream game for the #TeamTank. Jazz played well. And then in a blink of 4 minutes lost a 15-point lead. I'm not sure anyone actually expected the Jazz to pull the win off at that point.

But pull off the win, they did.

Gordon, Favors, Marv, Richard, Trey, Alec, Jeremy ... in various ways they all made a difference. 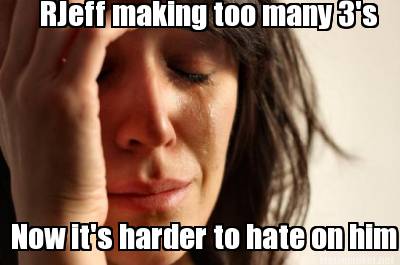 Perhaps the most fun is that we can believe that the team has an actual working offense. You'd never expect this had you watched the games in November. But in the past eight games, the Jazz have been over 100 points five times. The other three were: 86 against Indiana (understandable), and then 98/94 in the two games against Portland.

In other interesting news, the Jazz are nearly .500 with Trey as the starting PG (5-6). As I mentioned in the game thread, this is the kind of play I had expected for the entire year. So I'm excited to see it happening.

Three things that did not go well

Bring on the Spurs!