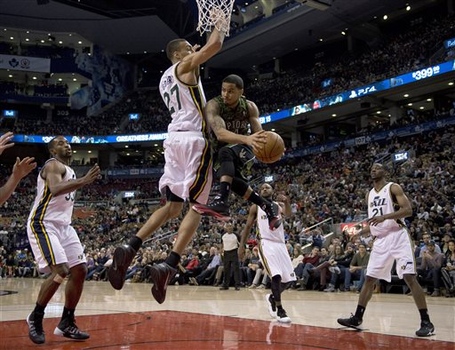 So today marked Gobert and Clark's first D-League game. They faced off against the Reno Bighorns (AKA Sac Kings D-League). You can watch the full match and get the box score here:http://www.nba.com/dleague/games/20131215/BAKRNO/gameinfo.html?ls=gt2hp2021300071

Combined, C&G scored 30 points, had 20 rebounds and 2 steals. So basically averaging a double-double (15pts, 10 rebs). That makes a huge difference in a game.

Gobert was a difference maker, and i have no idea why the coach kept subbing him out. The bighorns basically assaulted the paint when he was out, and got rewarded with a big run in the 4th. However, back to Gobert, that impact that he made was impressive and definitely noted.

FIRST EVER FANPOST! I never knew how hard it is to write a post game report. Now i know. So thank you to Amar, Diana, Shums, Spencer,Moni and Yuccaman (and whoever else write those reports, oh yeah Prodigy Punk) for giving in your time and writing them. And of course thank you Bitoko for writing the magnificent unicorn creator after ever game :) :P . Hope this was good enough of a report.

How did you think C&G did?