If you've been following along in the stream (and I hope you are) then you've noticed that I started off by talking about the qualitative aspects and benefits of winning the Rookie of the Year (ROY) award. In the last post I went hard into the quantitative averages that every since ROY winner has put up. I grouped it by era, and we found some trends.

In this post we're looking at the actual 2013-2014 NBA Rookie Class. These kids are special to me because I've been with them for their first NBA steps. I watched them in college. I may or may not have had contact with some during that time period. They were as nervous as I was at the NBA Draft Combine in Chicago. I got a chance to reconnect with the green room attendees in Manhattan at their hotel. And in Brooklyn I got to interview a lot of them and welcome them to the league's crazier questions. I cannot tell you how many times in the last year I've typed the names "Solomon" "Crabbe" "Zeller" "Nemanja" and "Shabazz". The transition from NCAA "do not touch" prospects to actual NBA players has been fun for me. And worrisome. I'm like a mother hen trying to coax every one of my eggs to crack, and expose a healthy, strong chick from within it's ovoid prison. When I look at box scores and see Plumlee only played one minute I feel bad for him, and his per game averages. It's strange.

And I guess that works because I'm a strange guy. After all, how many other people do you know who have a spreadsheet of 80 players that details enough information you'd think I was stalking them. 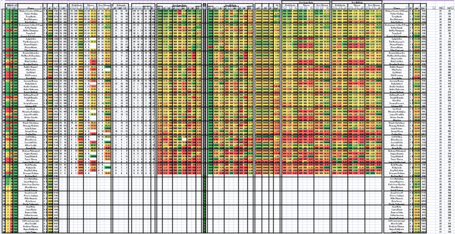 I know these rookies as men, as well as knowing them as reductionalist abstractions, set to two decimal places. I don't get to watch each of them play every night, but I feel compelled to chronicle their journeys as rookies. Does that mean I know who is going to be ROY this year? I have an idea . . . but it's only post #3 in this series. Hold on!

In the next post -- culling the herd from 80 to a much more manageable level.