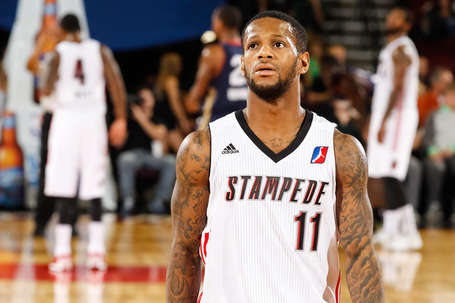 Tomorrow, Rudy Gobert and Ian Clark will go up against Idaho Stampede to try and dent their perfect record. They have gone 0-1 in their only D-league game so far, but they got valuable minutes to develop, as well as giving us an insight on what a beast Gobert already is.
The analysis below are all from a simple Box-score scan.

I know, Schroeder is not a Jazzman, however, to win this game, he'll need to do a pretty good job to shut down Jackson. Jackson averages 30.9 PPG, 5APG, and 4 RPG. Ian Clark might have to help against Jackson, if he goes off on one of those 40 point nights.

I'm going to look forward to this matchup, as this will test Clark's ability to defend.This guy shoots around 15 times per game, and is basically the secondary scorer after Jackson. He is a streaky shooter (from the looks of it) but in this season, his shooting %tage has never been at 50% or higher. If Clark can keep his shooting percentage below 34.5% (his average) and under 16 points, i'll be very happy with his defense.

Rudy Gobert HAS to dominated against Lauderdale. When you're 7'2 and the opposing center is a diminutive 6'8, you would expect Gobert to limit his opponent to a very bad game. Lauderdale seems to be a guy that shoots a very nice %tage, which means he most probably does not take bad shots. Lauderdale is also defensive minded, getting more than his fair share of blocks and rebounds(7.1 and 2.8). However, because (from the Box Score) Lauderdale seems to be like Rudy Gobert, except smaller and heavier, i fully expect Gobert to have a big, big game. I may be wrong (Jams backup center Brian Butch got dominated when they faced off) but i think Gobert will have at least a 20-15-6 (pt,rb,blk) game.

So, is it winnable?

Idaho is the best team in the Division, and Jams are the worst team. However, chuck in the recent addition of Schroeder, Clark and Gobert and now Jams have one of the most competitive teams. They did lose the first game playing together (mainly due to Gobert being being on the bench most of 4th quarter), but i think this game belongs to the Jams. LET'S GO C&G!

Thanks to longtimejazzfan, i have found out that Schroeder RECENTLY got called back up to the NBA. HOWEVER, they sent back down Jared Cunningham, who was the point guard of the Jams before Schroeder was put in and Cunningham pulled out. This causes some complications, as it seems like Cunningham is not as good a passer or shooter when compared to Schroeder. The good news is, Cunningham is a 6'4 shooting guard by trade, and Ian Clark is a 6'3 shooting guard, so they might play Clark at the 1.

IF Clark get's put at the 1

His match-up will be Pierre Jackson, who will undoubtedly be a lot harder to guard than Dee Bost. Jackson shoots a decent %tage (46% field, 43% 3pt), as well as posting those formidable stats. Clark absolutely has to limit his game if the Stampede are to win. It'll be the best case scenario if this happens, and we'll get to see just what Clark is capable of defensively, when pushed to the limit. Clark does have a height advantage (Jackson is 5'11), but Jackson takes more perimeter shots than drives (around 7-8 per game), which will mostly test Clark's ability to defend good jumpshooters. Offensively, i'll look forward to Clark initiating plays for Gobert and just how well he does at the point. Hopefully a lot of pick and roll offense (that the jazz often run) will be utilize. It'll also be good to see how Clark shoots off the dribble and his court vision. Playing point could very well mean Clark COULD have a big, big game.

If he get's put at the 2, it's the same analysis as above. But i seriously hope he gets put at point, as it'll open up a whole new aspect to his game.

Who will do better, Clark or Gobert? And will the Jams win?