The Downbeat #1237: Jefferson The Forty

Richard Jefferson becomes first Utah Jazz player to play 40 minutes at age 40. JK JK. But you believed it, didn't you?

Share All sharing options for: The Downbeat #1237: Jefferson The Forty

The Utah Jazz continued their "playing .500 ball while Trey Burke starts at point guard" ways again on Monday beating the Charlotte LOLcats last night. The Shums had a fantastic recap. It did come at a price, though. Mainly this price: 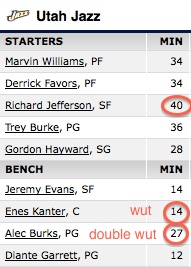 Richard Jefferson had himself a good game, right? Sort of. He did have a game high 70 possessions. 70 possessions. I was going to show Utah stats when Richard Jefferson was on the bench and when he was in the game but when the guy was in the game before the lights to the building were turned on and was still on the court after Energy Solutions Arena closed its doors it's pretty useless.

Here's the amazing fact, when Richard Jefferson was on the court he had a +/- of -4. BUT, BUT, BUT MY_LO IT'S JUST +/-. I know it is, but when a player almost plays every conceivable minute allowed in a game that means your team just about lost by 4 points.

If Alec Burks and Enes Kanter hadn't have played the most amazing stretch with Richard Jefferson on the bench yesterday the Jazz would have lost. What? Enes Kanter played well? His stat line says he didn't. But the on/off percentages say he did.

Contrast that to Richard Jefferson's PPS, 0.82 points per shot, and his porous defense. Alec Burks had a +/- of +7. The Utah Jazz won this game DESPITE Richard Jefferson. Once Richard Jefferson checked in and played 6 minutes of basketball with Enes Kanter, Kanter's +/- dropped considerably from his prior stint.

Richard Jefferson did have a good 4th quarter, but when a coach plays an individual for 40 minutes shouldn't ALL of those minutes be justified because he is sacrificing the development of future franchise pieces all for what? A win over the Charlotte Bobcats?

Don't get me wrong. I love winning. I love Trey Burke. I want the Jazz to win, but I want the Jazz to win in the way they were designed to win: BY THEIR YOUTH. The Jazz did not trade for a dumpster fire of veterans from Golden State, let go of Millsap and Big Al, and sign John Lucas III so that Alec Burks, Enes Kanter, Derrick Favors, and Gordon Hayward could watch yet another round of older players tool around on a court. The Jazz organization did so because they wanted to discover if this young crop was A) capable of winning on their own and B) able to improve exponentially with more minutes because of their young age.

The argument to have Enes Kanter watch from the bench could be made last year with established players like Paul Millsap and Al Jefferson. But, Marvin Williams? The opportunity for Enes Kanter to learn in game with the consequences not being as great are fading.

This year the Jazz are not making the playoffs. It's not a statistical possibility with the Western Conference as competitive as it is. The Jazz can learn with no consequences other than inching closer to a high impact player in the draft. Yet, Tyrone Corbin, still believes his job depends on wins and losses. How else do you explain Richard Jefferson getting his minutes and Marvin Williams playing ahead of Enes Kanter? What happens next year when losing games is unacceptable and Kanter still hasn't learned anything? The leash becomes even more shorter for mistakes.

That this is even an argument to which there's an opposing side trying to garner evidence as to why not developing a prior #3 pick big man who is 6'11 and has shown the ability to get 20 points and 20 rebounds at the NBA level in order to funnel minutes to Marvin Williams and Richard Jefferson is the highest form of idiocy this side of the Rocky Mountains.

Marvin Williams, the only top 3 pick that really matters on this team, continues to have an exceptional year from downtown. He's great at spacing the floor. Why he's not used to his potential as a zone breaker off the bench is beyond me, but Marvin is now shooting 41% from 3.

What is interesting is Marvin Williams was actually doing better from the bench. WUT? NO. IT CAN'T BE. Yes, it is. Let me serve you some truth smoothie that will make your organs stat-ified.

Being a starter his offensive rating has dipped from 112 to 105. His defensive rating has improved going from 109 to 106. The problem with that is he's giving up more per 100 possessions than he's scoring. SEE A PROBLEM?

Marvin also gets to the line less now. He had 12 FTAs from the bench. Starter? 4. 4. Marvin has about the same chance of pumping his own gas as he does of getting to the charity stripe while a starter.

But, but, but MY_LO, the Jazz are winning since Marvin was put into the starting lineup.

The Jazz started winning because, while Marvin was inserted into the starting lineup, Trey Burke was simultaneously put into the starting lineup, moving Enes Kanter and John Lucas to the bench. It wasn't Enes Kanter's fault the Jazz starting lineup was terrible. Kanter was one of the reasons it was still working. It was John Lucas' dumpster fire point guard numbers of high usage rate, low assist rate, and high turnover rate (for every 2 assists John Lucas would turn the ball over at least once) ruining the Jazz's hopes of ever earning a win. Enes Kanter averaged better numbers in his minutes than Marvin Williams WITH JOHN LUCAS.

But somehow Kanter got lumped into being the problem on the court, was sent to the bench, and it is painfully obvious that he doesn't know what he's allowed to do. If you got demoted from your job because of a coworkers poor performance after you had been shouldering most of the load how would you react? Not only that, your replacementis averaging less points, rebounds, and doesn't get as many trips to the charity stripe as you did. 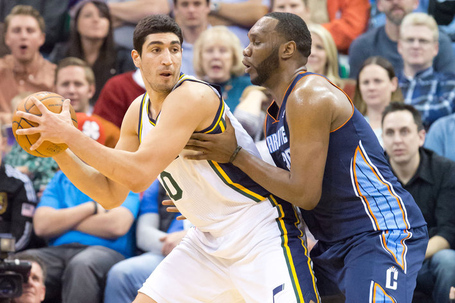