Share All sharing options for: The Downbeat #1216-The "He's So Good so I'm So Excited" Edition

I love point guards. I love them. I love everything about their role on the team. I love watching their play more than any other position. Point guards are my absolute favorite. I would not be a Jazz fan if it wasn't for that HOF point guard that we used to have.

My excitement level about the Jazz is the highest its been since we had Deron Williams, and its all because of a point guard. Just thinking about our point guard, Trey Burke gets me excited!

Look at this guy!

The Jazz have been a completely different team with Trey. Its amazing how much better an entire team can look with a good point guard. Yay for no more MOLO of Alfense.

Matthew Coles of the Associated Press wrote a nice article on Burke.

After only six games of Burke in the starting lineup, the whole outlook has changed.

"He's getting better and he's only played a handful of games. It usually takes rookies a while to find that rhythm. We will continue to improve as he improves," Jefferson added.

Already, Burke has displayed a growing command of the offense and he takes care of the ball. In the last 133 minutes, he has only committed two turnovers. His ability to break down the defense is at a premium on this Utah team where few can create their own shots.

Our whole outlook has changed. Our offense is smooth and fluid when Burke is in the game. I am actually really excited about our future and what the young core can do now that Burke is a part of it.

Burke on what Stockton taught him

"John taught me to be patient and get my teammates involved. He said the better passer you become the better scorer you can be," Burke said.

"It's a chemistry thing," said Derrick Favors, who is often the recipient of Burke's drive-and-dish passes. "We had to get used to a lot of new guys. But when Trey came back with us, he started hitting a lot of shots and then he got us all involved. He really helped us get going."

We are so lucky to have Trey Burke! You really do forget how fun it is to watch a team when you have a real point guard who gets all the other players involved!

Randy Rigby and his weekly interview on 1280 the Zone is always a fun listen. As smart people have reminded me Rigby's job is to put fans in seats, so listening each week with the expectation of finding what the Jazz's PR machine is thinking about is quite a fun thing to do.

We have had interesting discussions here on SLC Dunk and on Twitter about something Randy brought up this week. I thought it was pretty good timing. There has been much debate about wanting the team to win vs wanting losses for the lottery. Many fans watch the game hoping the team loses. Many fans want the team to win. Here is Randy on wins (via Moni)

What’s the feedback you’re getting from fans right now?What is fun for me is to actually see our fan base recognize and being supportive, number one, of the plan we’ve had, to grow this young team, and to build within the draft like we’ve done. And yet, and see their analysis from their own perspective.

And yet at the same time, see their support that they’ve had, for supporting us. And people say, "You know what? You guys have been brilliant in what you’re doing. I support what’s going on." And so, I think we have fans that are very much supportive of where things are going here.

And you have fans that would love to see us losing more, but you know what? We have in our DNA, we’re gonna do what it takes to, we’ve told our coaches and our players, "We expect you to win each and every night." And they’re working hard and they’re doing the right things, and we’re gonna totally support ‘em on, in that direction.

This past week the Jazz players, coaches, dancers and the Bear had their annual visit to Primary Children's Hospital. This year they also visited the Shriners hospital and the Veterans Administration hospital. 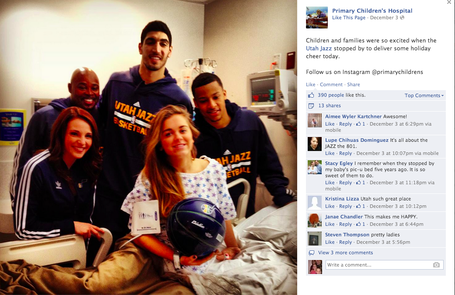 I know its in the players contracts that they have to do so many service projects per/year but their service projects are still cool. John Stockton said in his book, Assisted that when he was a player, players were obligated to make 12 annual appearances on behalf of their team.

Stockton's feelings on his annual visits to Primary Children's. (Excerpt from his book Assisted)

"Some of the more difficult but inspiring appearances were the annual Christmas visits to the Shriner’s Hospitals for Children and the Primary Children’s Medical Center in Salt Lake. These visits usually occurred after long Eastern road swings when we were tired and convinced we needed a break. The visits took us into less than happy and often tragic circumstances when we wanted to focus only on the holidays. Invariably, we found the gift of the Christmas spirit where we hadn’t planned on looking—in the eyes and hearts of the parents and children we met during these visits.

"Shepherded by our staff, I learned that some of the most rewarding things we do can seem deceptively difficult before we do them. Walking into a room full of somber, concerned parents and loved ones looking after a child with steel bolts and brackets coming out of his/her skull is an example of something that would be much easier to avoid. I often found it hard to find words of any kind when I entered a child’s room under these conditions. Then, a Jazz ball would pop out from the staff’s goodie bag and eyes would light up around the room. The parents would begin to relax and share their stories while gently nudging their child to warm to us and the newly autographed basketballs. Smiles all around usually resulted. We always left each room with greater gifts than we had brought.

"The efforts of the PR department often made it possible for us to be the type of people we wanted to be but couldn’t without a little nudge. Putting others first is hard, especially when it feels as though you have no time and are being tugged in every direction. In the end, I enjoyed almost every appearance. I’m so grateful to the Jazz front office for insisting."

There is a game tonight. The Jazz take on the RED HOT Portland Trailblazers. It will be interesting to see how the team does against a very good team on the road.

Check out Jody's previews of the Portland game.

In one he talks to Ty Corbin and Favors about facing the Blazers. And what its like for Favors to go up against LaMarcus Aldridge after facing, Roy Hibbert, and Dwight Howard.

When Corbin and Favors were asked about the match-ups they said:

"He’s worked his butt off to continue to get better," Corbin said. "He’s made some moves this year that he couldn’t make last year."

Even so, Favors doesn’t put himself in the same class as the big men he’s up against this week, which will also include DeMarcus Cousins on Saturday.

"Not yet. Those guys have accomplished a lot," Favors said. "I’m just starting to accomplish stuff, so not yet."

In Jody's other preview he covers another interesting match-up, this time between Trey Burke and Damian Lillard.
Burke on how he's improved since playing Lillard two months ago in the preseason

"I think I’ve come a long ways since then," Burke said. "Just from picking up the offense, knowing where guys are supposed to be and just having that feel for the game, it’s starting to come along. I think I’m a much better player."

Make sure to watch this exciting game full of amazing match-ups. Also make sure to take part in our game thread here at SLC Dunk. Amar keeps track of comments posted in game threads, I think there are prizes involved too for participants!

Jazzbasketball in his/her recap of the Indiana Pacers game brought up something really interesting, that deserves some discussion here.

The biggest surprise to me was following the game when Trey Burke said the Pacers’ pick&roll defensive tactics caught him off guard.

Question: “Anything surprise you about what [Pacers] did in the 1st or 2nd half?”

“Yeah I would say the pick&roll coverage, you know they were kinda lulling us into shooting that 5-foot jump shot…there was a couple of times I came off and kinda held it a little bit when I jumped in the air…and I think those are shots that I can definitely hit – they tried to stay in the corners with the shooters so it wasn’t like I could come off and hit Gordon or Alec in the corner cause they stayed…it was just a matter of just executing.” -Burke.

When I heard these comments I wanted to shout from the roof-tops:WHAT HAVE THE COACHES BEEN DOING?!

It’s mind-boggling to me that a professional basketball team can play the Pacers and afterward have a point guard who was unprepared for their screen-roll defense. Considering Burke is a rookie playing just his NBA 8th game and facing Indiana for the first time, you can’t fault him. With an off-day and playing at home (in a game the opponent also chose to play offense in front of their own bench in the 2nd-half), it is entirely on the coaching staff to prepare their team for this.

Make sure to go JBB's blog to see a video with an example of the Pacers screen roll defense against the Jazz.