Share All sharing options for: The Small Picture Rant Edition - The Downbeat - #955

A little insight on the Jazz's trade process from Kevin O'Connor: On what happens when the other side leaks deals being negotiated: It is frustrating. And I call ‘em on it. And I tell them that, you know, I’d like basically not to do another deal with ‘em. On the trade process and lack of responsibility of social media: I think the first thing that you try and do when you make a trade is to look at it and see if it’s common sense. You know, I mean, common sense would tell you that this can happen. Common sense would tell you that this should happen. Common sense would tell you, you gonna trade this guy for this guy, they’ve already got that position covered and the money’s different and everything else. So that’s not common sense. But in today’s day and age, with Twitter and all the blogs and everything else, nobody has any responsibility. They can throw out anything they want, all the minutia that they want, and with all of that stuff being out there, they really don’t have any idea of what’s going on. But they make a deal. And sometimes, I read something or somebody will come into me, or one time, you know, Greg [Miller] came to me and said, “You’re not considering doing this!” I said, “No, should I? I mean, this is the first time I’ve seen it. I’ve never talked to the team.”… So it’s part of the business. So you try and keep it with the principles, and you try and make sure that you try and have the deal done before it escapes. On when trades shouldn’t be made: Why do you make the deal? If you make it because everyone thinks you should, it’s the wrong deal, and it will come back to haunt you. It really will. I mean, the best deals sometimes that you make are the ones that you think to yourself, “I shouldn’t do this, but…” And if you do it, nine out of 10 times you’re wrong, ’cause your gut’s telling you not to do it.

The roster for the All-Star Rising Stars Challenge (frosh/soph game) has been released and neither Enes Kanter nor Alec Burks made it. 9 of the 18 players selected were from the 2011 draft class. If you remember, Enes was drafted at #3 and Burks at #12. The 2011 guys that made it were Kyrie Irving (1), Tristan Thompson (4), Brandon Knight (8), Kemba Walker (9), Klay Thompson (11), Kawhi Leonard (15), Nikola Vucevic (16), Kenneth Faried (22), and Chandler Parsons (38). As of right now, all of the guys on that list that play in the Western Conference not only get minutes, but are getting minutes on Playoff-bound teams. As we know, Enes only played five minutes in the Jazz's last game. Enes averaged 13 MPG in his first (lockout season), and overall his minutes have gone up (by 73 seconds) so far this season. In the month of January, however, he played just 12 MPG. Burks, meanwhile, has seen his minutes actually go down from his rookie season from 16 to 13.5. In the month of January, he played 16 MPG, which was surprisingly four more minutes than Enes per game (even when Mo Williams' injury is taken into account). 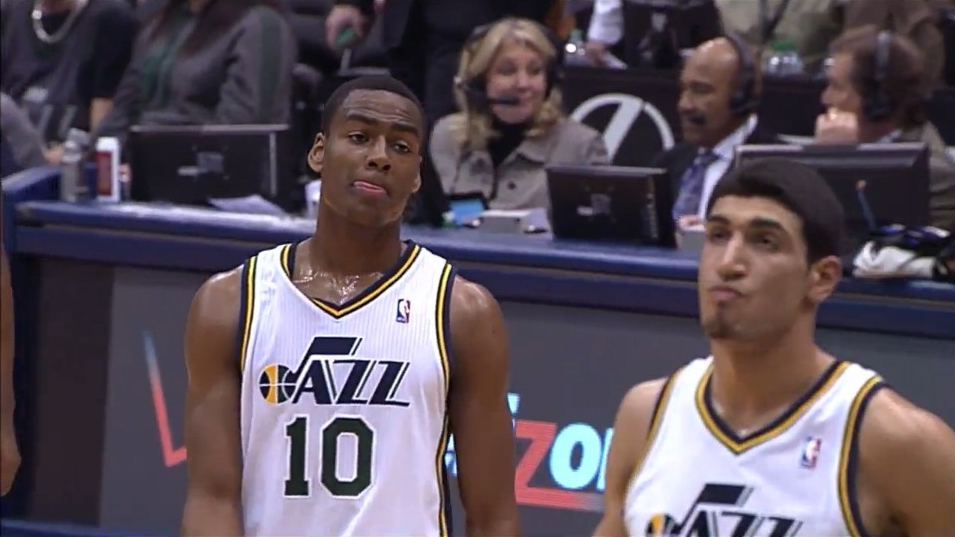 Here's my small picture rant of the day: Mo Williams has never been able to stay healthy; this is clear as day when you look at his career stats. Therefore, it was a pretty good bet that he would be missing time this season. Therefore, KOC knew our backup point guards would be pressed into starting duty at some point. And what we have on the roster are...Jamaal and Earl? To be fair, Jamaal is a serviceable backup point guard (and I really like his game) and no one knew that Earl would be playing as poorly as he has this season. But knowing what you know, how are we in this situation where we're scrambling for decent point guard play on a nightly, or sometimes even quarterly, basis? OK, so you went and signed Randy Foye, who can give you spot minutes if needed, but is clearly not a solution. If you want to do it by committee, you may also include Burks in there, but Tyrone Corbin did not prepare for that eventuality at all during his vaunted full training camp. After Mo got injured, Corbin said he needed to get Burks some reps in practice at the PG spot before he could do it in games. At the same time, he holds very few practices. So I just think we could have been way better prepared for Mo going down possibly for the rest of the season. Give me something that's in your craw -- not big picture like "Fire Ty" or "play the young guys more" -- just something small that's been bugging you.

Define Utah Jazz basketball... a) in a historic or traditional sense; b) now. People on the LHM payroll, whether it be coaches, team execs, or members of the media frequently talk about how the current Jazz are continuing to play "Jazz basketball." Would you say that the historic definition and the current definition are one and the same?