The Downbeat #963 - The Arch Rivals Edition

You know? Like the Classic video game of basketball where you could punch your opponents? Am I the only one who played arch rivals as a kid?

Share All sharing options for: The Downbeat #963 - The Arch Rivals Edition

Do you know something that would be super lame of me to do as a blogger? Reference my own work. But I am going to do that today to clear up something and to further discussion. I wrote a piece comparing Gordon Hayward and Paul George a few days ago and you may have seen it. It got some Pacer fans upset and what not, but I think I just need to clear up something. In no way was I trying to disparage Paul George as a basketball player. I think he's tremendous, probably the best wing from his draft class and a deserving all star. I wasn't even trying to prove, or suggest that Gordon Hayward was better than George. Honestly, other than determining All-Stars, MVPs and other awards, there is almost no value in determining which players are better than other players in a vacuum. What I was trying to point out was the value of roles and opportunity.

I think that even Pacer fans would admit that in their first two years, Hayward and George had eerily similar roles, minutes and production. I think you would have a very hard time finding two players, especially from so close in the same draft, that were so similar in so many ways. And yet in their 3rd years, one became an all-star, and MVP candidate in some people's long list and the other is a bench player who is not close to being an all-star. This leads us to one of two conclusions:

1. Paul George became much much better at basketball than Gordon Hayward did over last summer.

2. Hayward and George took a divergent path in roles and minutes and that changed the perception of talent level of each player.

Honestly I think it is probably a little bit of both, but I suggest that it is mostly reason number two. One of my most sincere hopes for the Jazz future, is that we will get the opportunity to see Gordon Hayward in Paul George's role next season. I want to see Hayward playing 35 minutes a night, taking the toughest defensive assignments and leading the team on the floor. I don't know if I will get that. And if I don't, I will probably stop being a Jazz fan. Just kidding.

But why do these comparisons matter? Why is it okay and not completely pointless to compare Hayward and George? Because they will forever be linked, hopefully, as sort of fake rivals. They are wings from the same draft class and they can be this Jazz team's version of Deron Williams and Chris Paul, which if nothing else, generated talk and debate and some level of marketability. I think Hayward, Kanter, Favors and Burks each have a natural "rival" we can compare them to and look forward to match ups with.

Who do you think you will compare these players to in the future? Or is that just dumb?

Here is your weekly look at offensive and defensive efficiencies: 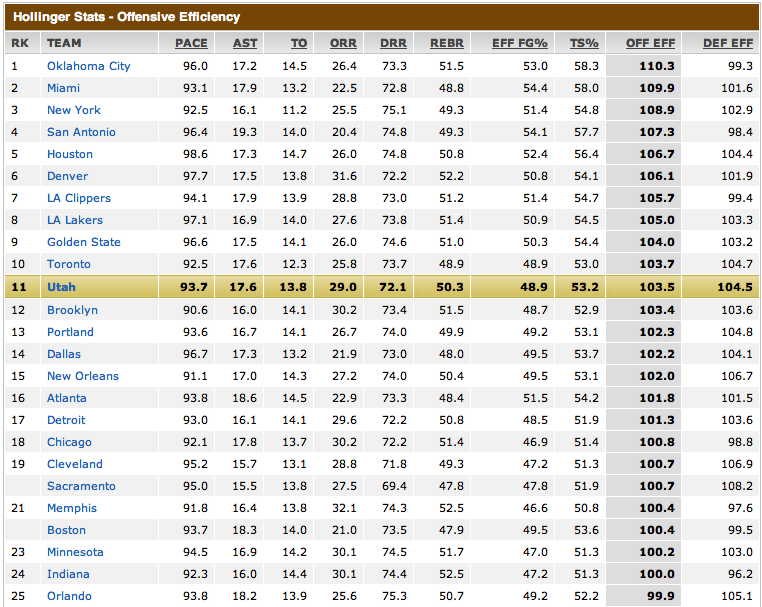 And the dreaded defense: 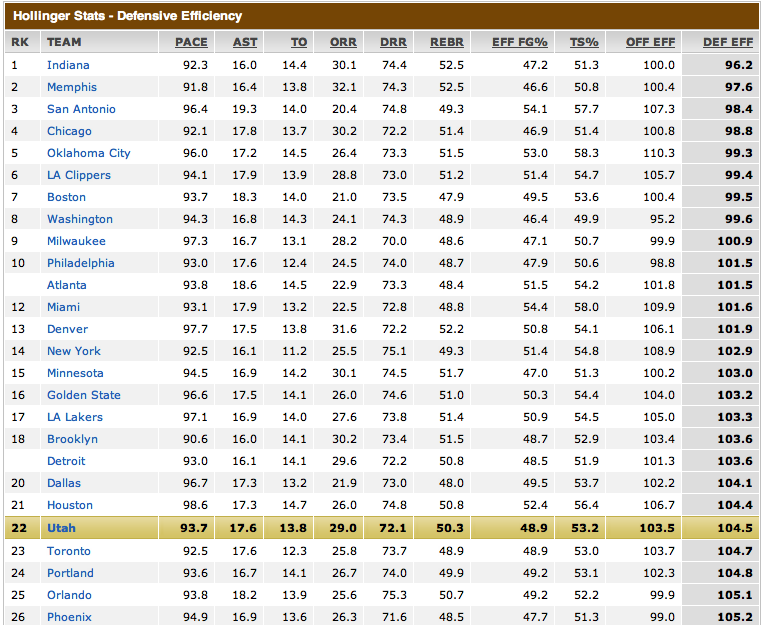 Believe it or not, we are actually headed in the right direction defensively. It will be interesting to see if we can capitalize on playing so many home games the rest of the season.

ESPN Insider Amin Elhassan wrote a piece about the 5 most cost effective players in the NBA and coming in number 5 was the Utah Jazz's own Randy Foye. Since it's an insider article and many of you won't be able to read it, I will quote Foye's portion here.

Foye has been a nice find for the Jazz, particularly with injuries that have decimated the point guard depth chart (Mo Williams, Earl Watson). Foye gives them another ballhandling/playmaking option in the backcourt, although he has been more aggressively looking for his shot, and the ability to play off the ball and not have to focus on creating for others has allowed his offense to flourish more naturally. Utah's flex-ish offense has proven to be a nice match for Foye's skill set, and has boosted his offensive efficiency to a career high 1.11 points per possession thanks to a career high in 3-point percentage (43.3, seventh in the NBA) and a low turnover percentage (10.6).

Foye's deal is as much about the Jazz's current cap situation ($67 million, roughly $3 million away from the tax threshold) as it is about their future. With potentially more than $30 million in cap space this summer, it was important for Utah to secure a veteran guard who can step in and produce at a price tag that would neither put them in jeopardy of paying the luxury tax, nor hamstring future flexibility.

You can say what you want about Randy Foye, and I have certainly been very critical of his defense and the fact that he starts. But the bottom line is that he has shot the deep ball extremely effectively and he is super cheap this season at 1 year, $2.5 million. That is just a great deal. It'll be interesting to see if Foye will have a continued future with the Jazz, but it would certainly be great to have him here draining 3 balls. Every good team needs three point shooting or a third guard.

The Jazz remaining schedule via utahjazz.com: 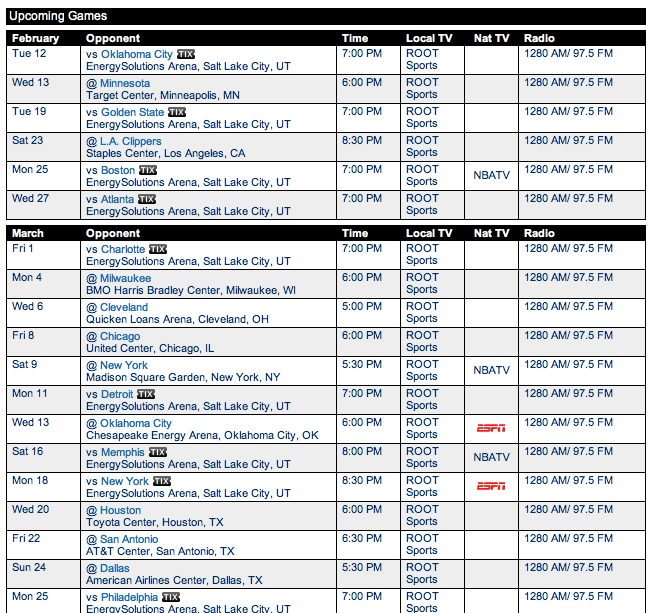 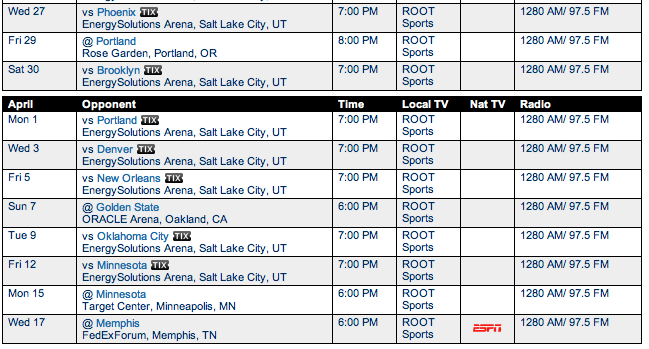 The Jazz have 30 games left in the season, 16 at home and 14 on the road. That's the good news. The bad news is that 18 of those games are against current playoff teams with winning records. We have Golden State twice, the Clippers in LA, and Oklahoma City 3 more times. Given our history of struggling to beat the Timberwolves in Minnesota, we could easily be going into the all-star break with a 4 game losing streak with the Warriors, Clippers and Celtics waiting on the other side. Yikes. We really need to win at Minnesota or home against Oklahoma City to avoid feeling bad about ourselves as a team and a fanbase over that 6 day vacation.

There are only 10 days left until the exciting trade deadline, which means that I only have 2 more downbeats to propose silly trade ideas. This one will be popular among Jazz fans and I crafted it last night with the help of @Doug_Cartwright and @HipMrBully:

Lamar Odom would be immediately bought out since we wouldn't have roster room for him anyways. Yay or nay and why or why not? Only 10 more days til we know what our team will be for the rest of the season.