The Downbeat: Something Is Rotten In the State Of Denmark Edition #964

Share All sharing options for: The Downbeat: Something Is Rotten In the State Of Denmark Edition #964

The Phoenix Suns are targeting Gordon Hayward and Al Jefferson. 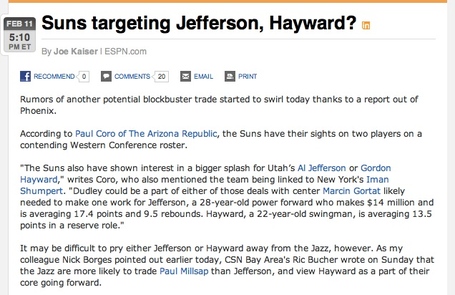 Yes it's as funny as it sounds. The Suns are targeting Gordon Hayward. Honestly, I'm not worried. Hayward is an untouchable. On the other hand a trade landing Marcin Gortat and Jared Dudley is tempting if it only costs Al Jefferson. If this really is a possibility for the Jazz then this gives credence to the fear of losing both Al Jefferson and Paul Millsap in the offseason. Otherwise why look for a big that would log 25+ minutes and be under contract next year? The one thing that is missing from this deal is draft picks. Those are Kevin O'Connor's bread and butter. They are a staple of San Antonio Spurs' trades too. Stay tuned.

Yesterday Chris Sheridan was on the 1280 Show talking Jazz and trade rumors. You can listen to it here. Here are some of the gems he dropped:

"[The Jazz} don't wanna lose guys for nothing [this summer], & if Dwight stays in LA, Al Jefferson is the No.1 free agent." @sheridanhoops

"Everybody knows the Jazz are looking for a PG, that's an open secret around the league." @sheridanhoops

These two are no brainers. Jazz are looking for a PG and are trying to avoid the Boozer scenario of just ending up with a trade exception.

"[Jefferson's] a nice player, but I don't think he puts the Jazz closer to a championship...which they're not." @sheridanhoops

"From what I'm hearing, Al's defensive [shortcomings] do not override the offensive parts of his game" for interested teams. @sheridanhoops

"How [the Jazz]come out of this trade deadline will say a lot, but don't forget they'll get Mo Williams back at some point." @sheridanhoops

Who does @sheridanhoops say is the player most likely to be traded? Will Bynum, backup PG in DET & watch for Jazz to possibly be involved.

"What I'd heard was that the Wolves like Alec Burks, and the Jazz have no intention of moving him." @sheridanhoops on Jazz-Wolves rumors

Thank you Austin Horton for your wonderful notes during this interview. FOLLOW HIM.

Now it gets interesting. The consensus with media types (around the league?) is the Jazz are at their crossroads. They have hit their potential with Al Jefferson and Paul Millsap as their nucleus. One could dare say they have exceeded their potential. What I was surprised to hear was Al's defensive efficiencies don't override his offensive parts of the game. What it sounds like is there are teams out there that either still believe that Al can continue to improve on his limited defensive game (Al has improved defensively. It would be a discredit to his hard work if I said he hadn't improved.) or they have a rim protector either at the power forward or center position ready to cover up his mistakes. That must be what San Antonio believes they can do with Tim Duncan and I have no idea what the Suns are doing. They are just in full on TANK! TANK! TANK! mode.

What is fascinating is Alec Burks is one of the untouchables. He is a fan favorite in trade machines when another team needs a prospect Alec Burks usually is thrown in. If Alec Burks is in the "Do Not Touch" category then who is in the "Jared Dudley-Throw In" category? That would leave Foye, Carroll, Tinsley, Murphy, Jeremy Evans, and Marvin Williams.

But do not be dismayed if you do not believe this Chris Sheridan interview for Kevin O'Connor has come to save you:

"I'm not sure where [Chris Sheridan's] getting his information, but it's certainly not from us." Kevin O'Connor

See? Everything is alright. Nothing to see here. Just move along. No comment.

That sound you heard coming down from space and landing on the fine, intricate webs of the internets was Kevin O'Connor's gift to you, Jazz fans. A bombshell of knowledge. A hint of where the organization is going. THE FUTURE. I have felt for some time now that the Deron Williams' trade put a specific timetable in place for the 2013-2014 season. What the Jazz do with this trade deadline, draft, and offseason will close the book on that trade. In other words, now is the time, this is the place, in Kevin "Irish Lightning" O'Connor we trust.

Which brings me to my next point, Dennis Lindsey was brought in to bring in a new vision to the organization. The Utah Jazz can spin this any way they want to but you don't bring in an outsider just to assimilate him into the Borg. You bring them in to bring fresh ideas and take you into a new direction. Especially if you bring in that person as the figure head of your organization. The Utah Jazz have entrusted Dennis Lindsey in carrying out the final steps of the Deron Williams' trade. The scouting of prospects to use on their last trade asset from that trade, the Golden State pick, the scouting of NBA players who will fit next to the pieces acquired with that trade, and the analysis of current players who may or may not fit with said players. WELCOME TO THE FUTURE!

FIREWORK BANANZA IN THE BACKGROUND.

We interrupt this Downbeat with a message from our Editor and Chief, AllThatAmar:

You can read the full version here.

I think we can all abide by these rules. There were a lot more rules but the other tablet was lost. Who knew when someone said you should get a tablet they meant an iPad not a stone tablet?

You must have by now noticed the title of the Downbeat. It is wildly the most misquoted line of Shakespeare. Most think Hamlet said it. Which he did not. Marcellus did after being shaken by seeing the ghost of Hamlet's father. He said it because he was hinting at something being afoul in the mood in the state of Denmark. This comes from the notion that if the head rots so does the body. Why do I bring this up? Well something is rotten in the state of Jazzland. That's us. We gotta shape up. All of us. Yes, you. Especially you. Especially me. We gotta love each other. Take care of each other. Piggy backing off of what Amar said, there are only so many of us. One of the greatest things that ever happened to me was discovering online communities and twitter. That there were so many basketball lovers and Jazz lovers out there besides my crazy dad (who mowed the Jazz logo in our front lawn every playoffs) and me. I love you guys. I love the guys at UtahSportsNet.com. There I said it. I admit it. I love the guys at Salt City Hoops. After all, they gave me my big break at blogging. I love Hardwood Paroxysm, The Basketball Jones, and everything that bleeds online sporting communities. Maybe even Bleacher Report. Don't tell anybody. My point is, we all have crazy opinions. We're passionate about them. That's awesome. Let's not draw lines in the proverbial internet sand. For the most part we will all be wrong. Why? BECAUSE DENNIS LINDSEY IS A F***ING NINJA.