Share All sharing options for: The Downbeat #967 - The Happy All-Star Weekend Sweeties Edition

Unfortunately for you guys and gals you are stuck with me today filling in for @Monilogue's regularly scheduled Friday downbeat. While she did not disclose her reason for calling in sick, I must assume it is Valentines Day related.

The good news is that although she is not here in personam, she is here in spirit. Yesterday evening we were treated to another fantastic tweet from Enes Kanter: 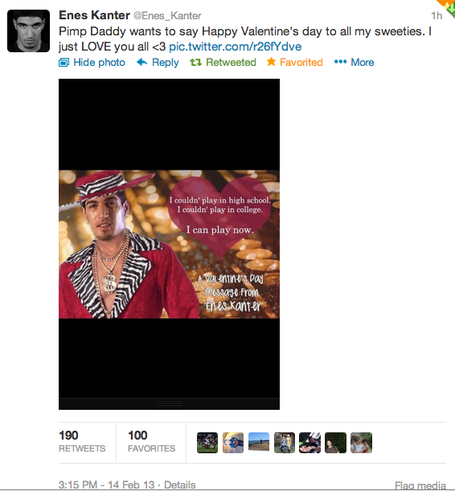 While the beautiful words and sentiment is all Pimp Daddy's Enes Kanter's, you'll probably recognize that the Valentines Card is nothing but another fantastic Monilogue creation, as can be found at her blog here: Living and Dying by the Jazz.

Lest you fear that Pimp Daddy's Enes Kanter's unique style and personality is lost in small market Utah, the big league basketball blogs appear to be hanging on his every tweet as well: ProBasketballTalk.

Tonight of course represents the kickoff to the NBA All Star weekend festivities in Houston. First up is the 2013 Sprint NBA All-Star Celebrity Game at 5 p.m. MT on ESPN. According to the NBA, these are the names you are likely to see:

NBA All-Stars James Harden of the host Houston Rockets and Russell Westbrook of the Oklahoma City Thunder will serve as the West and East team coaches, respectively.

Queen Latifah (Rapper/Singer/Actress) and Samantha Harris (TV Host) will be the assistant coaches.

Not a lot of "A-list" stars in that group. Or maybe there are and I am just too old and out of touch to realize it. The one name that I recognize off-hand is Kevin Hart, who served as Jeremy Evans prop in his final dunk in last year's dunk contest, as pictured in the photo at the top of this page.

At 7 p.m. MT, TNT will air the BBVA Rising Stars Challenge (formerly the Rookies vs Sophomores game). As has already been lamented, both Alec Burks and Enes Kanter were "snubbed" from this event.

While a lot of NBA fans mock this game due to the showboating and obvious lack of defense, it has always been one of my favorite events. I mean who doesn't like dunks and alley oops?

For at least the second year in a row, Shaquille O'Neal and Charles Barkley have selected the teams via fantasy draft. Here are the rosters:

So who do you have winning tonight? Personally, I think the lobs from Minnesota teammates Ricky Rubio and #TeamShved to Anthony Davis, Kenneth Faried and Tristan Thompson will be too much for #TeamShaq to handle.

I'm not sure if the majority of Jazz fans love the All-Star game as much as I do, but I consider it, along with NBA draft night, to be my favorite two basketball events of the year. Yes, that even means I love it more then nights when the Jazz play games that actually matter.

As BBJ mentioned in yesterday's downbeat, the Jazz's lone All-Star weekend hosting duties came in 1993. I was 13 and living in Utah at that time but I was far too poor to attend any of the main events. However, I was able to scrounge enough money to pay the cover charge to the NBA Jam Session, which for those who haven't been, is pretty much just a large NBA collectibles convention.

Once inside I made my most memorable NBA collectible purchase ever, a 1992 Skybox Dream Team, 3 card set (seen here). I have no idea what that set is worth today (anyone know how to check on that?), but I wouldn't sell it for the world. That set represents my lone piece of leftover memorabilia from the legendary Stockton and Malone era. A legend that only grew in my 13 year old eyes when Stockton and Malone were conveniently named the All-Star co-MVPs in that years All-Star game.

My only other live personal experience with NBA All-Star weekend, was the 2007 game which was randomly awarded to Las Vegas. Again, I only attended the NBA Jam Session, which as an adult has lost a lot of its luster. I did spend that night out with my wife and friends people watching the Las Vegas strip. If you haven't heard or do not recall, that is one of the craziest nights in Las Vegas history, which is saying quite a bit really. It was such a crazy night that ESPN's Bill Simmons dubbed it Hip Hop Woodstock and dedicated a rather long article about it (click here). As someone who lived that night in person, I think Simmons does a great job of encapsulating the craziness that ensued.

So those are my two greatest NBA All-Star weekend memories, what are yours?

Less then one week until the trade deadline. As such, I am going to steal a page from Clark's downbeats and propose a trade for your review and consideration: 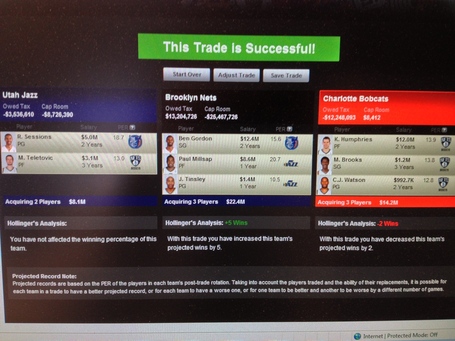 Utah Jazz: While none of us want to see Millsap go, it may be inevitable that he is leaving Utah either now or in July. This trade recuperates some return beforehand by adding Ramon Sessions who is once again putting up solid numbers including a very respectable 18.7 PER. Clearly, the Jazz's biggest need is PG and Sessions could fill that role at least for the rest of this season and next. The Jazz also add Mirza Teletovic who has been mostly disappointing this season but is alleged to have the skillset of a stretch 4, something the Jazz don't have right now. With how desperate the Nets are to improve, I think the Jazz could probably wrangle a future 1st round pick out of the Nets as well, which may not have much value now, but could be quite valuable in 2-3 years as that Nets team ages.

Brooklyn Nets: The NBA rumor sites all have various names tied to Brooklyn in purported swaps for Kris Humphries. Two of the names out this week were Paul Millsap and Ben Gordon. This trade does those rumors one better by giving the Nets both players. Millsap would be a plug and play starter for the Nets and be a huge upgrade. Gordon would be a great 6th man and gunner off the bench. The main downside of this for the Nets of course is the added money they'll have to fork out in salary and luxury tax payments. However, as we all know, when your owner is a playboy Russian Billionaire, you don't really care about such things.

Charlotte Jordancats: Ben Gordon (and his large contract) was acquired by the Bobcats last summer in order to obtain a Detroit Pistons future 1st round draft pick. He is not a central piece of the Bobcat's future and they'd love to move him out the door. On the other hand the Bobcats were one team last year that was allegedly attempting to sign Kris Humphries away from the Nets. While overpaid, Humphries is making almost the exact same as Gordon and the Bobcats are in much more dire need of help in the frontcourt. Parting with Ramon Sessions may be a bit harder for the Bobcats, but in this deal they get a young shooting guard prospect in Marshon Brooks who still has some upside and who is far cheaper over the remainder of this year and next, the Sessions is.