By now you've seen the NBA All-Star Weekend schedule. We've had a Celebrity game with no real Utah ties. We had the BBVA Rising Stars game without Enes Kanter or Alec Burks. The NBA DL All-Star game doesn't have Kevin Murphy in it -- and honestly no complaints there, he didn't set that league on fire like Morris Almond did. There are no Jazz people involved in the Sears Shooting Stars competition. None of our guards were asked to be part of the Taco Bell Skills challenge. Somehow Randy Foye was snubbed from the Foot Locker Three point Contest. And well, we already know that Al Jefferson was ALSO snubbed for the NBA All-Star Game. (Sure, maybe it's the homer in me saying it -- and Foye was a more legit snub)

It seems like just we're used to having a lot of Utah Jazz participation in these things. We've had multiple time All-Stars in John Stockton, Karl Malone, and Deron Williams. We've had guys be in the three point contest before -- and the auxiliary shooting ones as well (2-Ball was before the Shooting Stars comp). People forget that Karl was in the 2-Ball comp years before Jeff Hornacek was winning both shooting contests. We've also had quite a few guys in the dunk contest. A few years back we had Carlos Boozer as an All-Star, Deron Williams in the skills comp, Almond and Kyrylo Fesenko in the NBA DL All-Star Game, and Ronnie Brewer and Paul Millsap in the Rookie/Soph game. All in the same All-Star Weekend.

This year the only one representing us (besides Karl Malone) is Jeremy Evans. And right now that seems to be all we have as fans to hold on to. Our younger guys have all passed through the time limited window to play in the Rising Stars challenge. Our veterans don't seem to be any closer to being All-Stars. Even the guy who is breaking records for shooting this year isn't even good enough to be in the contest, according to the NBA.

So, yes. All we have this year is Jeremy Evans. And as a result, a lot of our hopes and expectations are being pinned to him. Also, he's also the focal point for our cheers, support, and social media salvos. Jeremy Evans has all of us getting his back. We don't have anyone else.

So, he's got to win this. He feels the pressure to represent all of us Jazz fans. And we need to rise to the occasion and get him back -- and if he's in the finals -- we have to make him win. 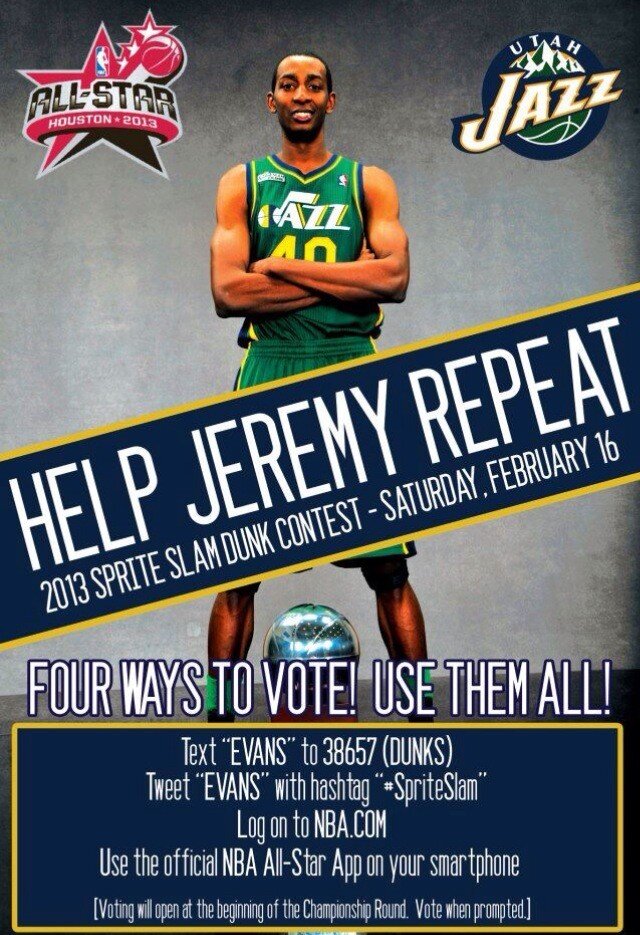 And together, we can.

While we don't have a ton of overt talent, or popular players -- this year we still have the defending NBA Slam Dunk Champion in Jeremy Evans. And the unassuming, out of sight / out of mind player in a way represents our Jazz team perfectly. No one expected him to win except us Jazz fans. And he won, he won for himself, for the team, and for us fans. And we can do it again this year.