The Jazz team is on the floor.

Back in 1986, a scene was created that would depict the struggle between Jazz fans and General Managers Dennis Lindsey and Kevin O'Connor.

Yes this video is Kevin O'Lindsey, played by Gene Hackman telling every body that "My Team is On the Floor" and no doubt, you saw the crowd of Jazz fan's reaction. I'll admit that I was a little disappointed when the Jazz didn't make any moves this trade deadline. But when it came down to it, I was disappointed because it would have been fun to have some change. It would have given us something to talk about. I wasn't sad about the lack of any deals specifically and I am fine with the team staying put. At least we know who we have to root for the rest of the year. To me there is a sense of relief that the deadline passing brings.

From what I can gather, Jazz fans who were really upset at the lack of movement, had 3 main gripes:

1. They wanted to see a trade free up time for one or more of the young guys.

2. They don't like Al Jefferson's game and want to see him traded from the team.

3. They didn't want Paul Millsap to sign as a free agent elsewhere and walk away without getting anything in return.

Here is my rebuttal to each of those:

1. I know it feels like the young guys' role on the team has been kicked down the road for way too long now, but I can almost guarantee that Gordon Hayward and Derrick Favors will be starting by the first game next season and I'd imagine that Kanter and Burks will get bigger roles as well. In the grand scheme of things, whether those guys get major minutes right now, or in 30 games from now, doesn't have a big affect on their long term development, or their desire to stay in Utah. However they feel about the team hasn't changed just because the Jazz didn't trade a veteran. If Favors and Hayward aren't starters next year, then you can be mad, but not now.

2. Al Jefferson wasn't going to be traded for anything substantial and his contract is simply too big to make a smart match with anybody. The fact he wasn't traded doesn't mean that the Jazz aren't going to part ways with him this summer. The Jazz simply aren't going to pay Al feature player money, because he isn't one and they know better than any other team in the league, not named the Minnesota Timberwolves. If the Jazz re-sign Al to a long term, similar contract to now this summer, then you can be mad, but not now.

3. If the Jazz think they have a chance at re-signing Paul Millsap this offseason, then not trading him makes sense. If the Jazz can talk Paul into a 4 year deal worth $8-10 million a year, then they can either convince him to take a 6th man role or trade him in 2-3 seasons, when Kanter is ready to start. Millsap has been linked to some talented players in trade talks before and if he is coveted at $8 million now, he will be coveted in 2 seasons at a similar price. When he walks for nothing in return, then you can be mad, but not now.

Have the Jazz improved as a team from last season? That is a question I have been considering lately. I'm sure each of you have an opinion about it. I think there are a lot of ways to compare the two teams. Last season the Jazz won 55% of their games and to equal that the Jazz would have to win 45 games this season. So if they win 45 games or more, you could make an argument that the Jazz are better this year. Here is your update on the current offensive and defensive efficiencies for the Jazz: 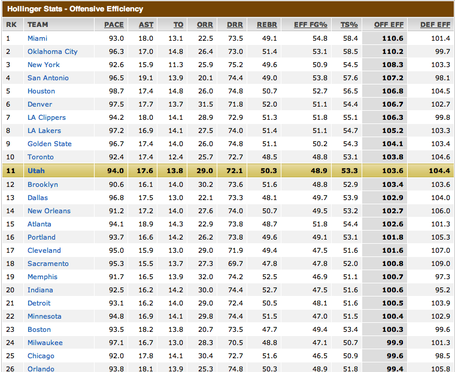 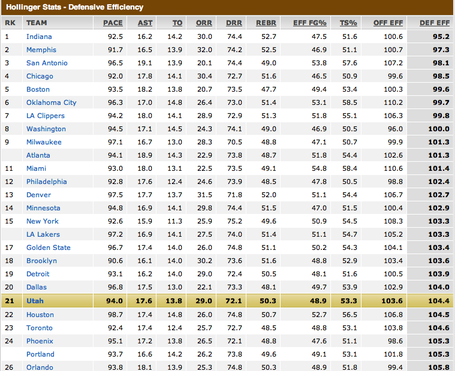 Furthermore point differential has been considered the best way to predict and determine true value as a team, at least more than actual record. Last season the Jazz outscored their opponent by 0.6 points per game and this season they get outscored by 0.3 points. Also, it is hard to argue that any of the Jazz players have been individually better this season than last, other than DeMarre Carroll. I think it is really hard to argue that the Jazz are better this season than last. The good news is that the Jazz have 26 more games in order to make up ground on some of these statistical areas.

I have been listening to a lot of NBA podcasts lately and every once in awhile I will come across some insight or nugget that I think pertains to the Jazz perfectly. Bill Fitch is generally considered to be one of the best 10 or 20 NBA coaches of all time. He won a title with the Boston Celtics and took the Houston Rockets to the finals. In an interview with Bill Simmons on the BS Report, Fitch had this to say:

It isn't money that makes a guy go...it's minutes. And the guy who controls the minutes is the coach.

We have complained about minutes and rotations and what not for more than 2 seasons now and part of that is because almost every fan base has some complaint they can make about playing time. But I do think there is something naturally wrong with the way time has been given. It isn't necessarily anyone's fault. It is what it is. Many of the veterans deserve minutes just like some of the young guys do. It would be equally unfair to take away minutes from Al Jefferson or Paul Millsap as it is to deny Enes Kanter and Derrick Favors their time. But Bill Fitch understands this and how important it is to give guys minutes they deserve. My one hope moving forward, and it's probably going to have to be next season, is that the right guys get the right minutes on this team.

Here lies Crazy Trade Proposal, who died on Thursday February 21st at 3 PM. Crazy Trade Proposal was espoused by those who loved her and will be missed dearly. She filled our days with wonder and our time with hopes and dreams. Crazy trade proposal is survived by her son Emotional Outburst about Playing Time and her daughter Taking a Team to 5 Games in a Playoff Series Will Be A Success This Year. With the official death of crazy trade proposals, I am wondering what you would like to hear more about in point 5 of my Monday downbeats. Anything that interests you? Do you have anything you would like me to look into? Want me to take a trip down memory lane with the Jazz? Let me know in the comments section.