NBA Free Agency Primer: A list of how much money each team can spend this summer

Share All sharing options for: NBA Free Agency Primer: A list of how much money each team can spend this summer

Because the Utah Jazz did not a) strengthen their position for making the playoffs, or b) blow it up so we can get good draft position . . . you're going to see a post that looks at the draft *and* looks at free agency here. Such is the life of the Jazz fan, recklessly thrust into the doldrums . . . and somehow coming back year after year for more. This one is about the free agency. To figure out how much money the Jazz, and every other team in the league can spend, I hopped online to find some data. The first, and easiest, was finding out the current salaries and the projected salaries for the next season. I found that all at Hoopsworld.com -- but there are many other sites that have that info available. The second, more important piece of information, was finding out what the Luxury tax threshold was for next year. I couldn't find it even after looking at all the important sites -- mainly because it hasn't been calculated yet. It requires this seasons' BRI to be known first. That said, assuming the league didn't make a ton of money this season, it's most likely going to be in the same neighborhood as it was for THIS season. This year it was $70.3 million. So for the purpose of this exercise . . . I've kept it as such.

I'm not salary cap expert (that would be Peter), but I am pretty handy with Excel. And here's the data: 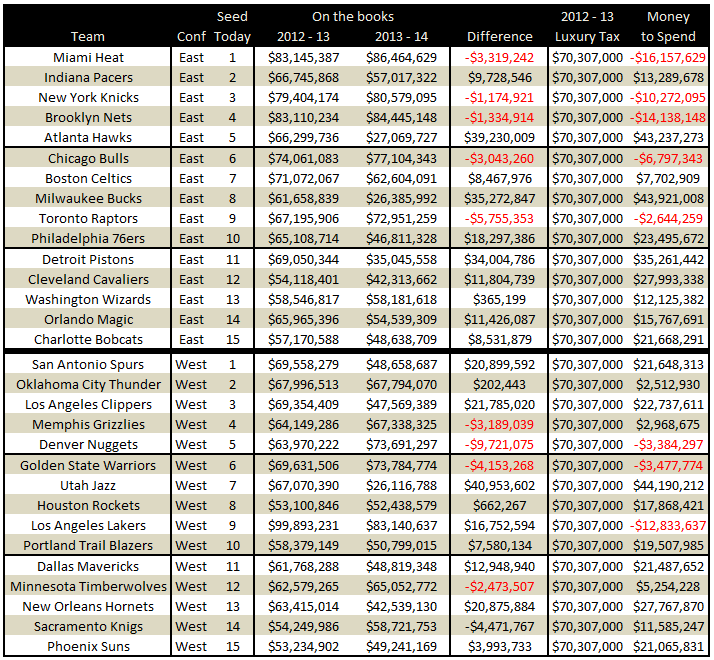 I have this split by conference, and put into order based upon their seed today. As a result, the teams that usually are spending the most are the ones that seem to have the higher seeds (duh). Secondly, while a number of teams in the 6-10 and 11-15 seed range have positioned themselves to have cap space to use this summer -- some of the teams in the 1-5 range have as well. The Indiana Pacers, Atlanta Hawks, San Antonio Spurs, and Los Angeles Clippers ALL have money to spend this off-season. For the most part, people WILL want to go to those places. They are winning, after all.

But for some players (dare I say it, the wrong type of players?) money is the most important factor. So let's look at the list of 30 NBA teams based upon how much money they have available to spend this off-season. 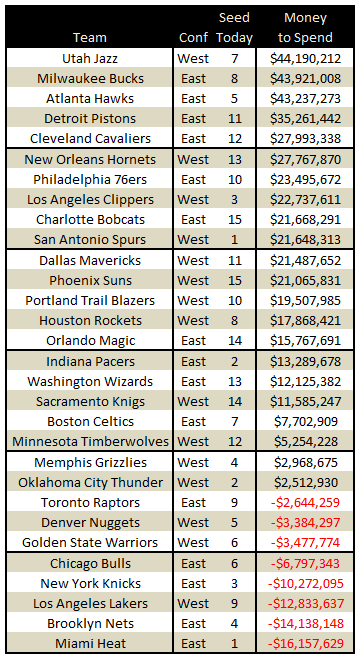 Wowzers! The Utah Jazz and Milwaukee Bucks have money to spend! (Assuming the Luxury tax is something all teams want to avoid, and that the threshold doesn't change much from this year to next) The Top 5 money locations are Utah, Milwaukee, Atlanta, the Detroit Pistons, and Cleveland Cavaliers. The quality of a team is important too, as is location. I'm sure players would rather play in Atlanta, have their money go father in Detroit, or play with Kyrie Irving in Cleveland -- over living in Milwaukee or Salt Lake City. So even though our two small market franchises have the most money to spend . . . they may not even be the most wanted locations.

Of course, the Clippers and Spurs both have $20 million plus to spend -- and while Chris Paul and Manu Ginobili are both free agents, it would be silly to assume that they'd leave their teams. They'll command the most money, but those two teams will still have money left over and a solid, winning core. Indiana has over $13 million to play with as well, and are the 2nd seed in the East. Some of the "good location" places have money as well, like the Orlando Magic and Houston Rockets -- Florida and Texas have a warmer climate and players flock there because they pay less taxes.

The Philadelphia 76ers, New Orleans Hornets, and Charlotte Bobcats will also have a boat load of money to play with, and the Dallas Mavericks and Phoenix Suns aren't too far behind. Soon enough you see that, yes, Milwaukee and Utah have the most money -- but they aren't really super attractive places to live; and while other teams have less to spend -- it's not like other teams don't have money to spend. Half the league has $15 million or more to spend this off-season.

Of course, this is just looking at the money available to spend provided everyone tries to stay under the $70.3 m luxury tax threshold. Some teams can scoff at it, and pay the tax because they are in a super big market, have a lot of fans constantly buying merch, and have exclusive TV deals. Some NBA owners are made of money. Some NBA owners are not.

I think that while the LHM Group of Companies can be judged to have $1 Billion, and that Forbes rates the Utah Jazz has having a healthy amount of operating capital -- we know the Jazz are a very conservative group. A huge chunk of our salary next year will be spend on the new free agent contracts for Al Jefferson ($12-16m per), Mo Williams ($7-8.5m per), and Randy Foye ($6.5m per). There goes $25.5 to $31.0 million of that $44.2 we have to spend. That's just adding three guys, and bringing up our roster size to 9 players. We'll have a few million less to throw around to free agents, and pay for our new rookies. Money is only good if you use it wisely. Otherwise it's better to not have money at all.

I do like how the Jazz did not make any trades, and how they've retained their Hoard of Erebor to sleep upon as we play the remaining 26 games of this season. I just hope our front office knows that 14 other teams have money to spend this off-season too. (And while this isn't all doom and gloom . . . it is when you actually look at this year's free agent crop)