The Downbeat: He's Nobody To Me Edition

Tyrone Corbine and his Don Quixote Quest against plus/minus windmills.

Share All sharing options for: The Downbeat: He's Nobody To Me Edition

Gotta give Ty credit if he saw this coming:

Evidently, inserting Watson into that lineup actually jumpstarted the starting lineup. There actually is a statistical difference with that lineup. It actually fairs much better in almost every category except one: 3 Point Shooting. The passing actually flourishes in it and people are looking for better shots closer to the basket when Earl starts with that lineup. Now the important thing is to remember this is a tiny sample size 46 minutes to 453 minutes, but still promising signs. Another important thing is none of those individuals ended the game with a positive +/-.

So maybe they all had better games. Marvin Williams got in a better groove; he got to the basket more. Al dominated the offensive end. Watson sped up the tempo and got this lineup in transition more. That's great. But if you're still getting run out of the gym on a consistent basis then it's futile. We can defend these coaching choices or we can look at the data and see that there are certain players that allow the Jazz to outscore their opponents EVEN IF they have offensive deficiencies. I think we have enough data on this horrible foursome of Foye, Ma. Williams, Millsap, and Jefferson should not be seen on a court together. They are routinely outscored by 8.7 points a game and are the Jazz's 16th best 4 man lineup ... out of 20. Let's stop this madness.

Now if only Tyrone Corbin would start this lineup:

Yep. That lineup is better in almost EVERY statistical category. But, hey, you need a bench scorer rather than focusing on putting your team in a position to establish control. Experience, blah, blah.

When Tyrone Corbin was asked about this here's what he said. Thanks, Moni!

Q: Coach, this has been the second straight game where all of your starters were in the minus in the plus/minus–Tyrone Corbin (interrupting): Whatever plus/minus is. However you want to look at it.Q: Any thoughts on making changes to the starting lineup?Corbin: I mixed it up tonight. Earl [Watson] started.Q: Any thoughts on inserting Alec Burks or Gordon Hayward into the starting lineup?Corbin: No.

The audio version is available here..

This is how I see that stretch turning out:

The most dreamlike of best scenarios is 5-8. That's giving up a possible 3 games if the Lakers go 8-5 in the next stretch. The Jazz could still make the playoffs but let's all stop assuming it's a done deal. This stretch is nightmarish. Basically what I'm saying is don't punch those playoff tickets just yet. There's still a lot of time and the Jazz's 3 1/2 game lead on the Lakers is not as big as you think.

Forgotten in this close loss is how well a lot of players played.

Look at those numbers. First of all Demarre Carroll should not be a lineup casualty. He needs to be one of your first energy guys off the bench. This whole nonsense of Hayward doesn't get respect with the starting lineup is narrative. Yes. I said it. Narrative. It's a contrived story. If this was true then he'd never touch the ball when he finishes games. It's a fun story to keep up the lie that he should and must come off the bench. He needs to start. Same with Burks. These guys are getting to the point where they deserve the ball. Favors line in this game, while pedestrian looking is phenomenal considering that when he was in the game he had an average defensive rating of 107 per 100 possessions. That was best on the team this game by 6 rating points. Unfortunately he fouled out with 5 fouls. (That is not a typo, ask Ty.)

Great quote by Alec Burks after the game when asked about playing against All-Star Paul Pierce:

He’s nobody to me, you know? He made some shots. Everybody make shots, you know? It’s just he got a bigger name than everybody else. 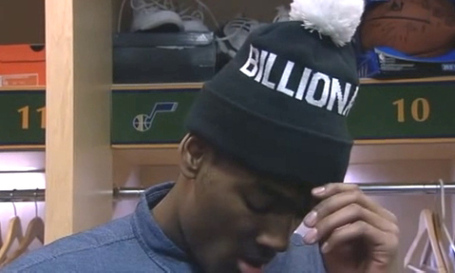