Utah Jazz guard Randy Foye is a free agent looking to cash in this off-season, but . . .

Share All sharing options for: Utah Jazz guard Randy Foye is a free agent looking to cash in this off-season, but . . .

As someone who doesn't watch college basketball regularly my first vivid memory of Randy Foye was that of him on draft night back in 2006. He was a combo guard taken #7 (higher than Gordon Hayward at #9 or Alec Burks at #12, for your 'young hot shot' scorecard), and he missed his parents and wished they could see him now. Foye was a sympathetic character to me, and I wished him well. His draft night was pretty crazy, as he was drafted by the Boston Cletics, then traded (with Dan Dickau and Raef LaFrentz) to the Portland Trail Blazers for Theo Ratliff and Sebastian Telfair . . . and then traded the same night to the Minnesota Timberwolves for Brandon Roy. He was traded one more time, years later, after failing to live up to the expectations of a high lottery pick, and sent with Mike Miller to the Washington Wizards for Oleksiy Pecherov, Darius Songaila, and Etan Thomas . . . and the future draft pick that turned into Ricky Rubio. So, I guess the T-Wolves finally got the PG they were looking for when they traded for Foye.

Foye played out his rookie contract's last year with the Wizards, then signed a two year deal with the Los Angeles Clippers where he made $4.25m each season. He took a huge pay cut this season when he signed with the Utah Jazz for $2.5m. This year's earnings are his second lowest in his career, and only about $50,000 more than his rookie year. His career average salary for his 7 years in the NBA (including this year) comes out to $3,210,200. Seven months from now he'll be 30, and on the downside of his career. So, effectively, for Mr. Foye it's now or never for a big payday. To his credit, he's completely transformed himself from a generalist, and combo guard into a super specialist. He's a three point shooter who excels at spot up threes (he's not so hot at creating his own shot -- just watch last night's game again to see this in action).

This season he's shooting a career high from downtown, 41.5 3pt%, which is much higher than his 37.5 3pt% career average. Interestingly enough, the ratio of his career three point attempts (1675) to total field goal attempts (4468) is ALSO 37.5%. That said, his shooting has become increasingly more disproportionate, and skewed towards taking threes. Two seasons ago 40.9% of all of his shots were threes. Last year 51.1% of all his shots were threes. This year? This season 56.7% of all his shots are threes.

So he's never shot better from downtown. And he's never shot more frequently from downtown either. It's not just the ratio that matters, Foye is shooting 5.4 three point attempts a game, which is also a career high. So as three point specialist, it's all working for him. Really all he does is shoot threes, and he really doesn't bring much else to the table. (I'm not being a hater, I'm being honest . . . check out Kyle Korver's first full season with the Jazz for comparison -- Kyle shot better, rebounded more, and did pretty much every thing else about the same) So the teams Foye would be interested in as a free agent would be the teams that NEED three point shooting. Of course, Utah would be about the top of the list because he knows the coaching staff adores him and doesn't ding him for being a poor defender. Other teams would probably not start him, but if they could give him about the same amount of money and a chance to win -- and not be in Utah -- I'm sure he wouldn't mind moving on again.

Of course, I'm absolutely certain the Jazz will over-value his talents and offer him that Matt Harpring Golden Handshake deal again, with the intended or unintended consequence of screwing over developing our younger guys. (No really, this is a real thing that our team has done for a loong while)

Foye is one of our most consistent players this year in that he has played in every game this season. Once getting into the starting lineup he has not left. He averages about 28 mpg, and is on track to earn over 2000 total minutes this year. So yay. I'm not really crazy about Foye, and I have reasons to feel that way. The most important reasons I have are the fact that a) he doesn't play enough defense as a starter, and b) he could just be a one year rental who leaves us high and dry. If you look at his Net 48-minute production (his PER minus the opponent's PER) he's at a negative number at the PG and at the SG this year. (That's not the case for Burks, or Hayward, btw)

Probably the larger thing to worry about with Foye outside of the fact that he could just be a one year rental who doesn't offset his defensive problems with his one track pony offense is that . . . well . . . he's a roller coaster when shooting. Every shooter goes and has ups and downs, but Foye looks less like a consistent deep threat and more and more like a volume shooter.

Strong claims, but hey, I actually did the work and have the data to support my claims.

Here's where he is so far this season, and broken down in ten game segments or blocks.

First off, holy crap all he does is shoot threes. Nearly 6 out of ever 10 shots is from downtown. And yes, he's shooting quite well from three as well this year. He's shooting better from three than overall. That's pretty crazy, but props to him to know what he's good at. Second, when we look at what he's done from 10 block group to the next one we see there is some distinct variation. It seems like when he plays more he scores more, and that's not really dependent upon his shooting ability. (He doesn't really shoot better when he plays more, for example) The third thing is that he's really dropped off of late, this is the second time this season he's shooting less than 30% from downtown, which is not so hot when the vast majority of all of his shot attempts are from three.

So yeah, good shooter, at times, but not consistent. The new car smell is still there with Foye, and his high rate of shooting means that we remember the shots that go in more than all of his misses. He's missing a lot more now than he did earlier in the season. I hope he refinds his touch. Most shooters do. But then again, he was shooting exceptionally hot to begin this year, and was vastly above his career marks.

Let's take a look at the relationship between his PPG and MPG: 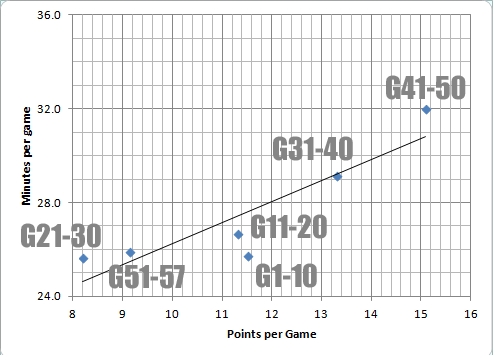 Some people don't understand math, or graphs, or numbers. So let me point this out clearly, the closer to the line the more 'normal'. The higher above the line on the y-axis the worse you are. When Foye has played his most (G41-50) he was the least close to the line. For him to play 32 mpg and only score about 15 ppg looks good, but is not as good as the rate he established for himself are lower playing times. At 32 mpg he should be scoring closer to 16 ppg. He was pretty awesome in the first 20 games of the season, not surprisingly, when he was coming off the bench to be the hired gun. (The Kyle Korver role) We didn't start Kyle, because he wasn't diverse enough to start, even though he did a few things better than Randy does today.

One of the things Kyle was shoot more consistently from game to game. This is not a strength for Randy either. And now let's take a look at his FG% and 3PT% from block to block. 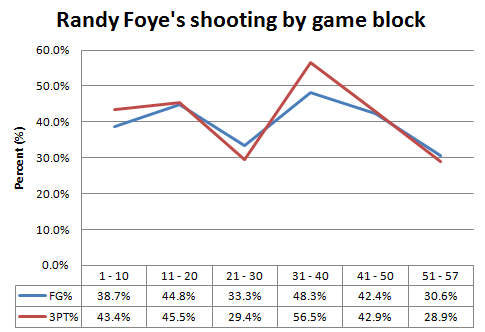 Yup. He's up and down. And if this season is any indication, hopefully he'll be hot again during our effective playoff push. Or, well, there's a 50/50 chance that he continues to suck because he needs to regress back towards his career numbers at some point. Very few guys go from being a good three point shooter into a legendary three point shooter around the age of 30. So I'm skeptical to say the least.

I'm also very worried that a lot of his concentration this year is due to it being his last big contract year of his career. Dude WANTS to get paid, especially after taking a paycut to play here in Utah, a less than attractive free agent destination. That said, he starts here, has the green light, isn't asked to play defense, and the coaching staff will willingly cannibalize the future of the team to placate him. So maybe he likes it here?

I do know the Jazz front office is completely enamored with him, and I wouldn't be surprised if they don't offer him at least $5-7 million a season moving forward. All that said, I hope that if we do sign him, that we do sign him for a sensible amount. If we don't sign him that this season was another failure -- and he joins the ranks of one and done veterans who come onto the team to play one year and move on like Derek Fisher, or Josh Howard, or Raja Bell (this last go-around), and so forth.

I'm not crazy about Foye. He's crazy good at threes, and really doesn't bring much else to the table. He's reconstructed his entire career to be a three point specialist, and he is having a career year at that one thing right now. Like all shooters, he has his ups and downs. He's in a down right now. I hope he gets out of it. I also recognize that the better he does in these last 30 games will make it more likely that he moves on next year -- lots of teams have cap room, and a real contender would love to add him. Just here in Utah he knows he will start despite the more reasonable options that are on the roster. He wants to get paid. And I really think show him the money.