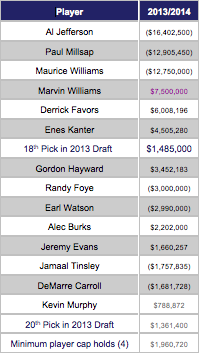 Summary: It's no secret that the Jazz have very clean books and lots of cap space this summer. You've heard all about their flexibility from everybody around the organization. The interesting thing is that the Jazz will have about $50 million in cap holds that will tie up that cap space until the Jazz either renounce those free agents, agree to a new deal with them, or else those free agents sign with another team. So it would be a good idea for the Jazz decision makers to already have a general game plan of what to do with their own free agents, so that they can move on quickly to other teams' free agents.

Jazz Player Options: Marvin Williams. I'd be very surprised if Marvin opted out of his deal, but if he did, it would give the Jazz even more cap space and flexibility. 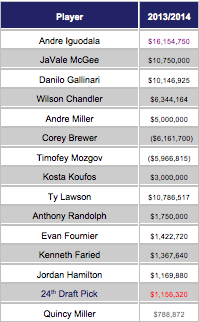 Summary: The Nuggets aren't going to have cap room this summer. They could convince Iguodala to opt out of his final $16 million and sign a long term deal, but it won't help enough to move them under the cap. In fact, they are probably not going to be able to bring back some of their restricted free agents and may need to cut some salary.

Free Agents/Cap Holds: Corey Brewer ($6.1 million); I would guess that the Nuggets will try to bring Brewer back at a cheaper price than his hold of $6.1 million.

Player Options: Mozgov is a restricted Free Agent and has a qualifying offer. Julyan Stone will most likely be replaced on the roster by the 24th pick in the 2013 draft. I don't see the Nuggets retaining Mozgov due to financial issues.

Jazz Free Agent Signings: The Nuggets could use part or all of their Mid-Level Exception to sign a Jazz free agent. None are likely, however.

Jazz Trade Options: Besides being in the same division, Denver makes little sense as a trade partner with the Jazz, as they are two teams without a star player.

Jazz Contract Dumps: The Nuggets are an interesting team to keep an eye on as they may flirt with the luxury tax line. Wilson Chandler or Andre Miller especially seem like players the Nuggets could dump to a team with cap room. 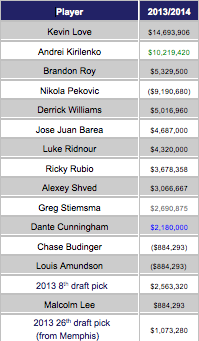 Summary: The only way the Timberwolves could free up adequate cap space is by renouncing Nikola Pekovic and by Andrei Kirilenko opting out of his last year with the team. But ultimately the Wolves will probably try to re-sign Pekovic to an extension and I highly doubt that Kirilenko will give up $10 million for a team that uses him so effectively. The Wolves could potentially have a lot of cap space in 2014, but have at least Ricky Rubio to sign to a long term extension if not Pekovic and Derrick Williams as well.

Jazz Free Agent Signings: The Wolves are unlikely to be able to afford any of the Jazz's free agents before their own.

Jazz Trade Options: The Wolves have a handful of guards that the Jazz could be potentially interested in, but it might be hard to get any of the very good ones without giving up one of the Jazz youngsters.

Jazz Salary Dumps: Keep an eye on Minnesota, because they will want to avoid the luxury tax and may need to dump some salary in order to do so while keeping Kirilenko and Pekovic. Dumping Luke Ridnour and his contract especially makes some sense for the Jazz and Timberwolves. 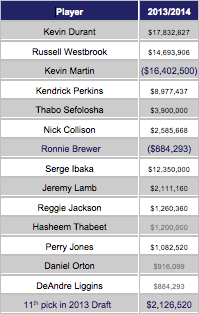 Summary: You can imagine how worried the Thunder are about their upcoming salary obligations when you consider the fact that they dumped James Harden to avoid his salary. With three young stars that have negotiated long term contracts, the Thunder aren't going to have cap space for the foreseeable future.

Free Agents/Cap Holds: Kevin Martin, Ronnie Brewer. It'll be interesting to see if the Thunder can convince Kevin Martin to stick around for mid-level type money and if Martin would be willing to take such a pay cut to play for a contender.

Jazz Free Agent Signings: Thunder have the MLE to use, but are unlikely to pursue any Jazz free agents other than maybe Randy Foye.

Jazz Trade Options: Not a lot of possible trades that make sense this offseason with the Thunder and Jazz.

Jazz Salary Dumps: Wouldn't it be ironic if the Jazz took a young prospect or pick from the Thunder in exchange for taking Kendrick Perkins' salary into their books this summer after the Thunder obliged to do the same back when the Jazz were paying the luxury tax? I wouldn't call it likely, but it's an option should the Thunder choose to dump Perkins' salary this offseason. 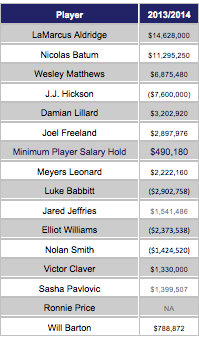 Summary: The Trailblazers will be able to clear enough space to make an offer to one decent sized free agent. We all know what happens when the Blazers get a little spending cash. If I were Minnesota, I would look out for an offer to Nikola Pekovic. The Blazers will also probably have cap space the next two seasons.

Free Agents/Cap Holds: JJ Hickson, Luke Babbitt, Elliot Williams, Nolan Smith. The Blazers would need to renounce all of these free agents to maximize their cap space, but could easily do so. They could also negotiate deals with any of these players for less than their cap holds.

Jazz Free Agent Signings: We know the Blazers like Paul Millsap and they could clear enough space to offer him a deal starting around $10-12 million.

Jazz Contract Dumps: Most likely nothing there.

Next up: Southeast Division