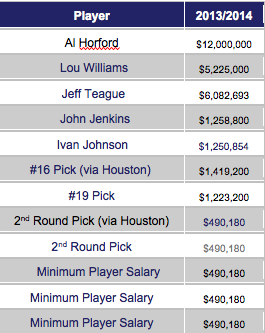 Summary: Atlanta is in an equally good Cap Room situation as the Jazz are. Whether they stay there depends on if they decide to reinvest in Josh Smith, which is a similiar dilemma to the one the Jazz will consider with Al Jefferson and Paul Millsap.

Amnesty Candidates: Horford is the only one available, so it won't be used.

Player Options: The Hawks players do not own any options, though the Hawks do have unguaranteed contracts on Jeremy Tyler and Mike Scott, each for less than $1 mm, so it will not have any major impact on their cap room.

Jazz Free Agent Signings: The Hawks will have the ability to sign any of the Jazz's free agents if they so desire. However, with Horford on board, they would not seem interested in any of the Jazz's main guys. I have heard rumblings that Horford prefers to play Power Forward, so perhaps the Hawks would have interest in signing Al Jefferson to team with Horford.

Jazz Trade Options: As Jazz fans are well aware, the Hawks are as well positioned with flexibility as the Jazz are this offseason. Perhaps the only player the Jazz would have interest in acquiring from the Hawks through a sign and trade is Jeff Teague. However, the Hawks appear intent on re-signing him themselves.

Jazz Contract Dumps: The Hawks have no need to dump salary at this time. 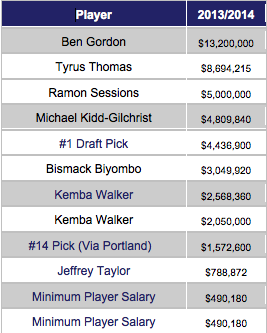 Summary: Charlotte is poised to have a big chunk of cap room, however it is contingent on them deciding not to extend qualifying offers to Gerald Henderson ($7,753,318) or Byron Mullens ($5,632,655). While I think Charlotte would welcome both players back at a reasonable price, the cap holds for each are large and they could extend QOs and then seek to have both of them re-sign for much lower cap numbers immediately to lower their total committed salary.

Amnesty Candidates: Tyrus Thomas is owed $18mm this year and next and would be a likely amnesty candidate considering his low production on the court. If amnestied, Charlotte could easily open itself up to around $21mm in Cap Room.

Player Options: Ben Gordon has a $13.2mm player option, but he is virtually certain to opt in and return to the Bobcats next year at that price.

Jazz Free Agent Signings: With or without the amnesty clause, the Bobcats can easily create a big enough chunk of Cap Room to throw at Jazz free agents. Furthermore, the Bobcats have one of the worst frontcourts in the league. If the Bobcats were willing to throw big money at Kris Humphries last offseason, then you'd think that both Jefferson and Millsap are threats to be signed by Charlotte.

Jazz Trade Options: While the Bobcats have the ability to acquire either Jazz big man while utilizing their Cap Room, they may be willing to work a sign and trade if the Jazz have interest in a player the Bobcats deem expendable. Ramon Sessions would seem like a possible candidate here along with sign and trades for Henderson or Mullens. 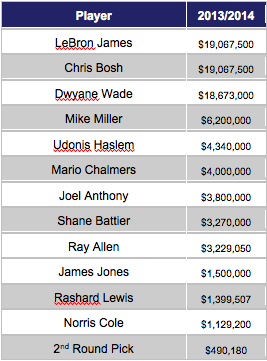 Summary: Miami is currently well above the luxury tax threshold and could look to Utah as a place to unload salary. While none of Miami's players are particularly appealing, the Heat could sweeten the pot by adding future draft picks.

Amnesty Candidates: Miller, Haslem, Anthony. It was speculated the Heat would use their amnesty on Mike Miller last season. He seems even more likely a candidate this year with his miniscule production in 2012-13.

Player Options: Allen, Jones and Lewis all have player options and any may realistically retire or return for a chance at a ring. In any event, none of these players substantially impact Miami's bottom line.

Jazz Free Agent Signings: The Heat will have the Taxpayer Mid-Level Exception to pursue free agents with. This may be enough money to convince Randy Foye to jump ship, but the other Jazz free agents do not appear to be realistic free agent targets for Miami.

Jazz Trade Options: Even by amnestying Miller and all player options going unexercised, the Heat do not have a realistic chance of getting below the tax paying apron in order to complete a sign and trade for any of the Jazz's pending free agents.

Jazz Contract Dumps: The Heat could very well be in the market to dump players into the Jazz's cap space. Miller, Haslem, and Anthony would appear to be candidates. None of these players are appealing for free, but Miami does own the rights to a Sixers lottery protected 1st round draft pick in 2014 and 2015. 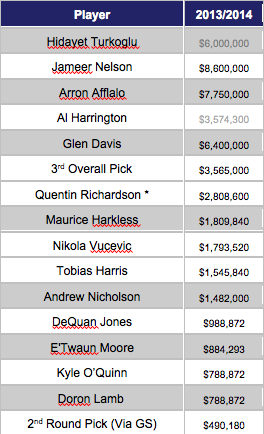 Summary: Orlando cleared a bunch of bad money last year and will likely be doing so again by eliminating Turkoglu and/or Harrington off the books. While Orlando could have up to about $11 million in Cap Room, they also have retained traded player exceptions of $17,816,880 from the Dwight Howard trade and $4,350,000 from the Ryan Anderson trade. These large TPEs make Orlando a strong competitor with the Jazz in facilitating salary dumps or unbalanced trades this offseason.

Renounced Free Agents/Cap Holds: Beno Udrih ($11mm). The Magic may consider re-signing Udrih but at nowhere near his cap hold. He'll be renounced or either re-signed cheap.

Player Options: The Magic players do not own any options, though the Magic do have partially guaranteed contracts for Hedo Turkoglu and Al Harrington. For the purposes of my calculations, I am assuming that Turkoglu and Harrington are bought out.

Jazz Free Agent Signings: The Magic could have close to $11 million to throw at Paul Millsap. With a large amount of roster holes filled they could afford to place all of their money in a player like Millsap. However, the Magic appear content to grow through youth and a middle aged vet like Millsap is not likely what they are looking for.

Jazz Trade Options: Orlando reportedly showed interest in trading Ryan Anderson to Utah for Paul Millsap last year. The Magic have Glen Davis, but he is hardly considered a core piece. Orlando does have a number of young lower level prospects that the Jazz could be interested in and the ability to take on a large contract from the Jazz in either their Cap Room, or more likely their TPE.

Jazz Contract Dumps: The Magic have no inherent need to dump salary at this time, however they may wish to free up additional cap room and trading partially guaranteed contracts like Turkoglu or Harrington might make some sense. The Jazz would obviously look for some sort of benefit out of this, be it future draft picks or a young prospect. 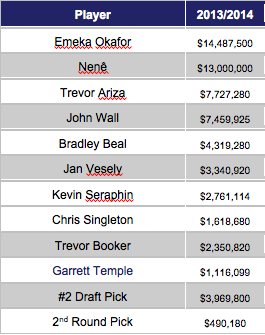 Summary: The Wizards are slated to be just over the Salary Cap line and about $10mm clear of the luxury tax line. This leaves them little room to improve, but since they've played well since John Wall and Nene have returned, they may be happy standing pat this offseason and letting the large contracts of Okafor and Ariza expire.

Renounced Free Agents/Cap Holds: Martell Webster ($2.1mm). Webster has played well as of late and is iffy to return.

Player Options: Both Okafor and Ariza have player options, however considering both players current production and age, it would appear that they will both return to Washington and exercise their options.

Free Agent Signings: The Wizards will not be in position to sign either Jefferson or Millsap, nor is either guy really needed with the Wizards current front court composition. The Wizards will have the non-taxpayer MLE to spend which would give them about $5mm to throw at Mo Williams, Randy Foye or maybe even Marvin Williams if he opts out.

Trade Options: The Jazz could work a sign and trade for any of its players, but what does Washington have that the Jazz would want to take back? Perhaps the relatively affordable Kevin Seraphim would be an option.

Jazz Contract Dumps: The Wizards could look to dump either Okafor, Nene or Ariza in order to eliminate some large contactual obligations on a losing team. However, Nene would appear to be too productive still and with Okafor and Ariza expiring the need is not so great.