Utah Jazz: Playing time vs. Opposing starters, looking at numbers and not making them up

Share All sharing options for: Utah Jazz: Playing time vs. Opposing starters, looking at numbers and not making them up

I love the Utah Jazz, and I love the potential that our young players have. That said, a lot of their successes are passed off as products of playing against inferior competition. Similarly, many of the failures of our starters (all veterans on expiring deals, or ETO years) are not focused upon because they are against big, burly, starters from the other team. The interviews of the front office, in addition to the media blitz in support of the team, seem to placate the fans. Well, not all of the fans, but a few of them (be them casual fans or hardcore fans alike) love it.

I have no problem with someone listening to someone else and hearing what they wish to hear. I also have no problem with that being the end of it, and having that first someone then not actually go the distance to do any individual work on their own. Some fans don't need to do the work themselves because they're convinced of something. That's cool. That's just not how I am. I like doing the hard work to find or disprove my feelings. It's a little more honest and actually shows how much I love the team -- that I will take out part of my own free time to investigate not only my feelings, but also investigate and understand (and love) this specific 2012-2013 Utah Jazz team a little bit more. Not everyone has to search for a quantitative justification to love this team for. The opposite is also fair, not everyone should automatically trust what they hear -- finding something to love can be a worthwhile endeavor in itself. As we're not lemmings here at SLC Dunk we do the hard work and investigate premises. Even if it means finding out that we are wrong at times.

Today one of the bigger stories that seem to be recited is that our starters don't look so hot because they play harder guys; and that our bench only looks good because it's a mirage. I don't think that the successes of our youth are just due to playing against bench guys. And I don't think that the failures of our starters are because they are ONLY playing against great starters. Sure, against Kevin Garnett and Paul Pierce the other night our starters were outclassed. That said, Al Jefferson makes more money than Garnett, and only $1.6 million less than Pierce. So . . . maybe our starters ARE NOT that great as some media members suggest, but they can't truly be absolved for poor performance, as they are getting paid like superstars.

Here is the percentage of playing time for each player, against opposing starting players of the same position (E.G. Randy Foye vs. other starting SGs) The breakdowns are for the last 20 games, last 15 games, last 10 games, and last 5 games. Do we see any trends? Well, bereft of Mo Williams there are more guard minutes to go around. 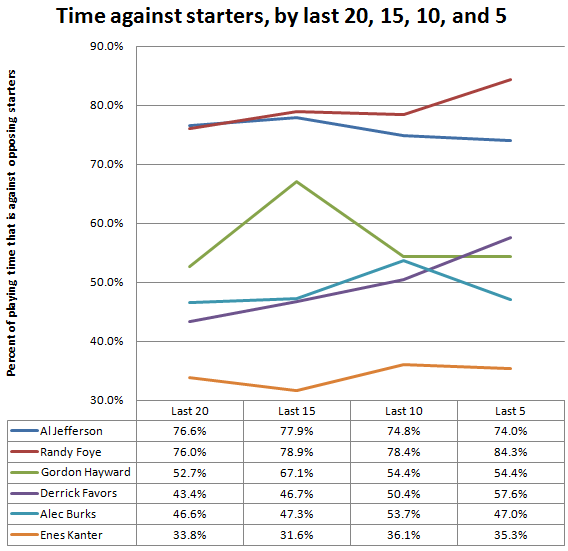 I guess if there are conclusions to make, at least a quarter of all of Big Al's time is against bench guys. Randy Foye plays the most against opposing starters, probably because now Alec Burks is playing, and plays some of the minutes against bench guys that Foye would have played. Hayward is steady at playing more than half of all his minutes against starters, but had a huge spike between 20 and 15 games ago. Derrick Favors is trending upwards against starters, 60% over the last 5 games. Enes Kanter remains the only C4 guy who is way behind.

To say that the Jazz starters only play starters, or the Jazz bench only plays against other bench players would mean the speaker is:

I think David Locke is one of the most hardworking people out there in the Sports world, and works so hard and diligently. He has access to all the facts. And he's not a dummy. Locke's not ignorant. So I guess maybe he didn't have the time to actually look into this, was making a quick justification, or just being facetious. I don't think he was being dishonest. But I'm not going to tell anyone how to think or feel about anything.

I will just say, hey -- these are the numbers. I got them all from popcornmachine.net, and I have the spreadsheet. I took the time to investigate a premise. And while I'm just a fan, I did find out some information which contradicts a premise.

Now, do we then re-adjust the +/- for each of these six players according to their time against starters and try to make a new number? We can. But I'm not going to do all the work here. So I'm going to leave it up to you to connect all the dots here.

We love the Jazz, that's why we spend so many of our free time hours on the team. There's no vortex here. And people shouldn't have their feelings hurt by someone pointing out quantitative facts. This isn't +/-. This is just showing how much time a player plays against opposing starters. It's not all or nothing.

This took a lot of time to do. Why? Because you have to check every 5-man lineup and see who that Jazz player is supposed to be guarding, and if that guy is a starter or not. And not every team does the same thing the same way each quarter, and not every team makes a substitution when your team does, and not every player is even playing the same position every game. This takes dedication. And as a result, we have a more objective analysis of who plays against the other team's starters -- and who does not. And we now have quantitative ways to measure this. And why did I do it? I did it because Utah Jazz fans deserve this level of insanity, because our fan base is one of the most insane. And we don't just need insanity, we also deserve accuracy and honesty. Hence, more than 50% of G-Time's playing time is against starters -- and NOT against bench guys. We know this to be true now. The data shows it.

ALL HAIL THE DATA!