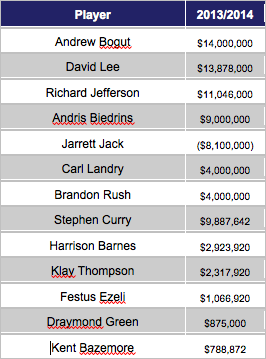 Summary: There is no doubt that both Richard Jefferson and Andris Biedrins are going to opt in to their deals, so the Warriors aren't going to have any cap space this summer. I'd guess that they dumped salary to avoid the tax this year, so that they could pay it next season if they have a good team.

Free Agents/Cap Holds: Jarrett Jack ($8.1 million) has a cap hold, but I would imagine the Warriors would be interested in bringing Jack back if they could agree to a deal similar to this year's ($4 million per).

Player Options: Biedrins and Jefferson are most certainly opting in, but Carl Landry and Brandon Rush also have $4 million options that either could opt out of. I would guess that Rush opts in and Landry opts out in hopes for a long term deal. Just a guess.

Jazz Free Agent Signings: Unlikely, especially if all the Warriors opt in. They will have pretty much a full team.

Jazz Trade or Salary Dump Options: I really like Brandon Rush's game if he comes back from his injury. And if the Warriors can't figure out how to play David Lee and Andrew Bogut together, one of them may become expendable. But in short, not a lot there. 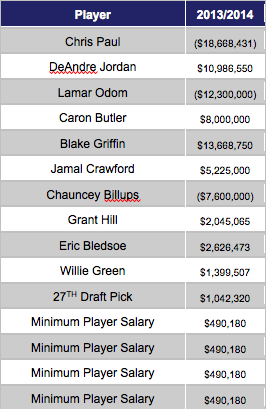 Summary: What looks like $16 million in cap space this summer, will really be money set aside to pay Chris Paul a max contract. If for some reason, Paul signs elsewhere, then the Clippers become players on the open market with cash to spend.

Player Options: None, but Grant Hill and Willie Green's deals are unguaranteed.

Amnesty Candidates: Not eligible. Already used it on Ryan Gomes.

Jazz Free Agent Signings: Unlikely. If the Clippers somehow lose Chris Paul and have cap space, they won't need any more bigs and they have already let go of our other free agents.

Jazz Trade Options: If Paul Millsap is interested, that rumored deal of Millsap & Burks/rookie/future pick for Caron Butler and Eric Bledsoe would be able to happen in a sign and trade scenario after July 1st. Just putting that out there.

Jazz Contract Dumps: I don't see a lot of options here. Even if the Clippers decided to dump a guy like DeAndre Jordan, would the Jazz be interested? 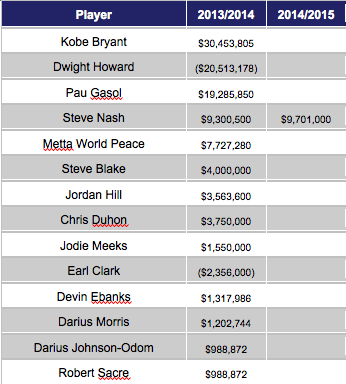 Cap Room: HAHAHAHAHAHAHAHAHAHA! No seriously, if the Lakers amnestied Kobe Bryant and Dwight Howard didn't resign with the Lakers, then they would still have only about $10 million in cap space. But both of those things aren't happening.

Summary: I don't know what the Lakers are going to do, but they are one of those cash strapped teams no matter how you cut it. I did include the 2014/15 season as well, to point out that even if the Lakers re-sign Dwight Howard this offseason, they are probably going to be a team with tons of cap space that the Jazz will have to compete with for flexibility.

Amnesty Candidates: Kobe Bryant, Pau Gasol, Metta World Peace, Steve Blake. I think using the clause on Ron Artest would make some sense this offseason. But it isn't my money.

Player Options: Metta World Peace has a $7.7 million option, which he will most certainly exercise.

Jazz Free Agent Signings: The Lakers will have the Tax Payer Mid Level Exception (around $3 million) to offer a guy like Randy Foye or Mo Williams.

Jazz Trade and Salary Dump Options: I think there is something to a Pau Gasol situation. It would do the Lakers financial wonders if they could give Pau Gasol away without bringing back much or any salary. I think it would be an interesting thing for the Jazz to consider as well. It makes some developmental sense and might actually improve the Jazz if Gasol rediscovers his game. 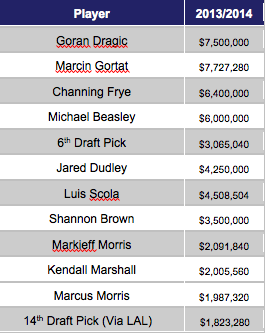 Summary: The Suns will have enough money to make a free agent offer to a very good player this offseason. Their books are fairly clean in the upcoming years.

Free Agents/Cap Holds: Wes Johnson ($5.4 million), Diante Garrett (988k), and Jermaine O'neal (884k), but none will have a huge hit on the Suns' cap room. The Suns aren't bringing Johnson back for anything significantly above the minimum salary, if at all.

Jazz Trades or Salary Dumps: I imagine the Jazz could be interested in Gortat if he became available, but the Suns aren't in any kind of financial trouble to need to dump salary in the near future. 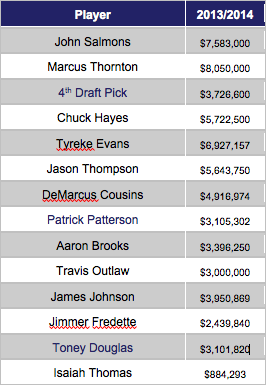 Summary: That cap space number is certainly misleading because that doesn't include Tyreke Evans' $6.9 million qualifying offer. The Kings could have potential cap space, but they also have decisions to make on Evans, Johnson, and Douglas' long term future with the team. The Kings will have tons of financial flexibility in the next few years, but will also have really high lottery picks to pay, as well as the 60th pick Isaiah Thomas, who will be up for an extension this summer.

Amnesty Candidates: John Salmons and Demarcus Cousins are eligible. Neither likely, in my opinion.

Free Agents/Cap Holds: James Johnson ($7 million) and Toney Douglas ($5.2 million) have cap holds and qualifying offers, but I believe the Kings will almost certainly pass on offers to either. Evans ($10.5 million cap hold) is a different issue. I could see another team making him an offer and the Kings matching, or I could see Evans taking the $6.9 million qualifying offer and becoming an unrestricted free agent next season. The Kings' possible move to Seattle complicates that decision further. But if Evans stays on the Kings next season, they will have virtually no cap space to play with.

Player Options: Aaron Brooks has an option for $3.4 million that I imagine he will exercise. The team has several options/qualifying offers that I have already mentioned.

Jazz Free Agent Signings: I think the Kings are set at power forward and Center for now. I mean, they just traded away a rookie power forward, so they must not need one.

Jazz Trade Options or Salary Dump: The Kings probably won't be in enough financial trouble to need to dump salary, but that was true before they dumped Thomas Robinson and Francisco Garcia and Tyler Honeycutt to the Rockets to save...wait for it...$3 million. So anything is on the table for the Kings. If the Jazz can take advantage of the Kings like the Rockets did, then I think they will, but I'm just really not sure what to guess about Sacramento's thinking right now or their desire to trade.