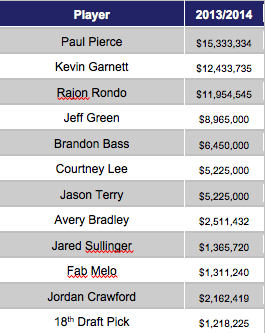 Summary: Boston has some difficult choices to make in the offseason depending on how this year plays out. They are currently set to be a tad over the luxury tax line but they may wish to blow things up and rebuild. If true, Pierce has a partially guaranteed contract and can be bought out to bring the team under the luxury tax line. Furthermore, if Garnett's threats to retire appear true, then we may have the first instance of someone using the stretch provision in the new CBA.

Amnesty Candidates: Pierce is a potential amnesty candidate but unlikely.

Jazz Free Agent Signings: There is no clear path for Boston to acquire a Jazz free agent this summer.

Jazz Trade Options: A rumored return of Al Jefferson to Boston is possible, but would require the Jazz to take back some lengthy long term contracts. Unless the Jazz had interest in Jeff Green, Brandon Bass, and/or Courtney Lee, a two team trade would seem off limits. Perhaps a 3 team trade would work if the Jazz could facilitate getting Pierce or Garnett to another team that has assets it wants to give the Jazz (like Eric Bledsoe).

Jazz Contract Dumps: If the Celtics go into rebuilding mode they may be willing to trade the Jazz Green, Lee, or Bass for free. 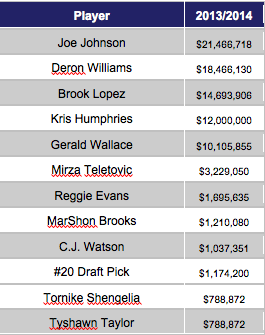 Summary: Other than the Lakers, the Nets appear to be in the worst spot financially going forward. Brooklyn doesn't appear to care though and will continue to look to add salary to improve their title hopes.

Player Options: CJ Watson is on a player option and will likely only choose to explore free agency if he thinks he can get more playing time elsewhere.

Jazz Free Agent Signings: Brooklyn has no room to pursue any of the Jazz's main free agents, though Randy Foye might fit in as a designated shooter. He'd have to take a pay cut though.

Jazz Trade Options: With Brooklyn so far into the tax range, a sign and trade is virtually impossible.

Jazz Contract Dumps: The Nets aren't likely to be in the market to dump salary. 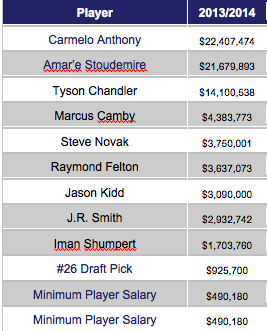 Summary: Like the Lakers and Nets, the Knicks are way over the luxury tax line. They similarly don't care.

Player Options: J.R. Smith has the ability to test free agency and he may do so, as at the very least, he may want long term security.

Jazz Free Agent Signings: The Knicks have almost no ability or need to sign the Jazz free agents.

Jazz Trade Options: The Knicks are above the tax and a sign and trade will likely be impossible.

Jazz Contract Dumps: Should the Knicks look to upgrade some positions they may be willing to dump a player like Steve Novak or Ray Felton on the Jazz. Both are fairly paid, so this seems unlikely. 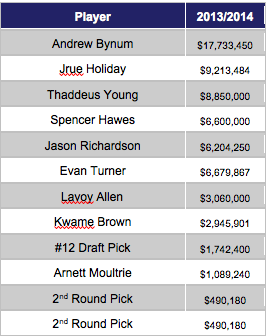 Summary: The Sixers' complete financial and competitive future are both based on Andrew Bynum. While he is an unrestricted free agent this year, I've assumed he will re-sign and placed his cap hold into the calculations.

Player Options: Kwame Brown will not get $2.9 million from another team, so expect him to opt in to stay with the Sixers.

Jazz Free Agent Signings: The Sixers ability, and desire, to sign a Jazz free agent depends entirely on Andrew Bynum. Should they re-sign him, then there is no issue. Should he walk, they may want to get in on the Al Jefferson derby. Right now they'd only be able to offer a starting salary to Jefferson of about $12 million, but if they were able to unload some mid-ranged players like Allen or Brown, then they could make Jefferson a competitive offer.

Jazz Trade Options: The Sixers may have interest in a sign and trade for either Al (if they don't re-sign Bynum) or Millsap, if they see him as an upgrade at the power forward position. Unless the Jazz have interest in a Lavoy Allen or Evan Turner, a deal would seem unlikely.

Jazz Contract Dumps: The Sixers may wish to dump Richardson or Hawes, but their draft pick is already contingently owed to Miami, so an arrangement that entices the Jazz seems unlikely. 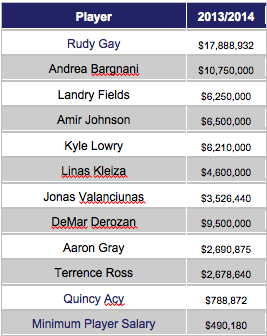 Summary: Toronto is right on the cusp of the luxury tax line and is seemingly unabashedly trying to find a way to dump Andrea Bargnani's contract.

Amnesty Candidates: Bargnani is eligible to be amnestied and if they cannot find someone to take his full salary this may be an option to get his contract off the books and also get another team to pick him up and partially assume his contract. Being below the salary cap would allow the Jazz to bid on Bargnani in an amensty waiver process if that happened.

Player Options: Both Gray and Kleiza have options and will likely choose to stay with Toronto next season.

Jazz Free Agent Signings: The Raptors lack the financial flexibility to make a run at any of the Jazz's free agents.

Jazz Trade Options: A sign and trade would be possible for the Jazz, if the Raptors expressed interest in any of our big men. Unless the Jazz would like to trade for Bargnani or DeRozan, a trade seems unlikely.

Jazz Contract Dumps: The Raptors could call the Jazz about dumping Bargnani or DeRozan, but this is likely a worst case scenario for the Jazz in terms of acquiring contracts.