I believe it was Augustin08 who suggested a few topics he would like the writers at slcdunk to tackle, one of which was to play armchair GM and lay out a plan for building the team. I'm going to do that this downbeat.

Share All sharing options for: Let's All Put on Our GM Hats - The Downbeat #957

The first thing I would do is make a decision about what to do with my big man rotation in the future. But first let's take a look at our weekly offensive and defensive efficiencies: 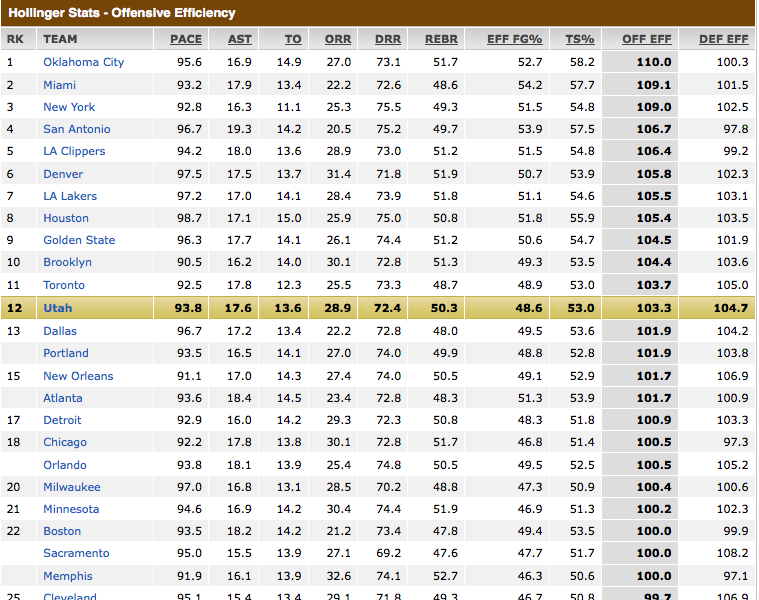 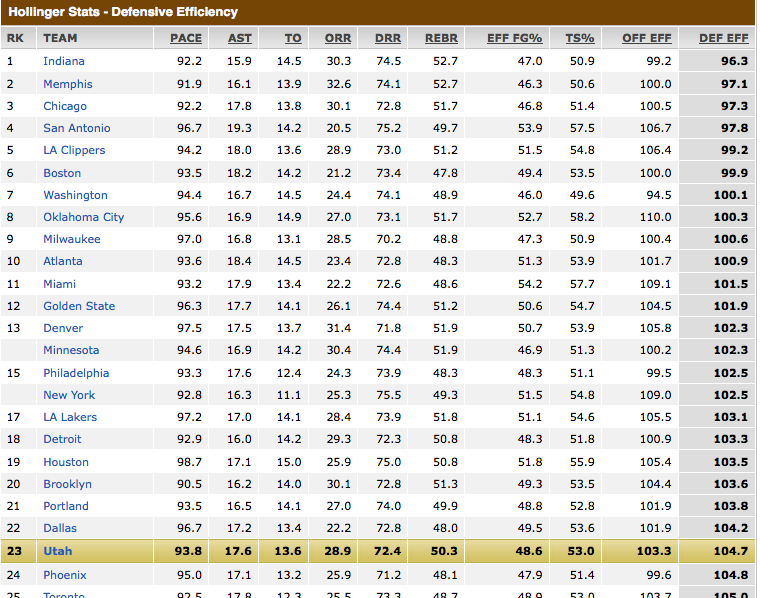 Why are these numbers important? Well, if this team's defensive efficiency stays about where it is, it will make the 9th straight season that Al Jefferson played for a below average defensive team. In fact, since Al Jefferson became a full time starter, his team has never finished above 20 overall defensively. Of course, that is not all on Al. There is no question that he has made huge improvements in his abilities to play team ball on offense, and he has also made strides defensively. Unlike many Al Jefferson antagonists, I believe the effort is absolutely there. But 9 years of evidence is pretty solid evidence. I think it's completely safe to say that for Al Jefferson to be the starting center on an above average defensive team, would be unexpected.

On top of that, this season will be the 2nd season in the last 3 where the Jazz will be outscored when Al Jefferson is on the floor. And it's not even really close. It's not the same as saying that Al Jefferson makes the Jazz worse, but his overall affect on the team's performance is discouraging, especially for a top-paid, top-featured guy that Al will have to be.

You can talk about his late game heroics and his fantastic footwork and his lack of shooters around him, but his overall affect on the team isn't anywhere close to worthy for a main piece, let alone THE main piece moving forward. If you are a GM and you decide to re-sign Al Jefferson, even at mid-level money (completely absurd offer for Jefferson's past contract history), then you are saying one of two things:

1. The Jazz can be an above average team defensively with Al Jefferson playing major minutes at the center position.

2. It isn't important to have an above average defensive team.

I believe one of those is a lie and the other is foolish. Take your pick.

At the same time, I don't see a great, realistic trade involving Al Jefferson, so I'd hold onto him, make another run at the playoffs and then let him walk during the offseason, with no intention of bringing him back under almost any circumstance.

And rather than be really mad at me, Al Jefferson supporters, try instead to explain how Al Jefferson can be a main contributor on a good defensive team. It would put serious holes in my argument and make for good discussion.

The next thing to address is the Derrick Favors situation. I'm pulling Derrick aside and explaining that I can't trade Al or Paul this season, because the offers in return are just not right. However, I'm going to tell him that he will be in a position to be in the starting front court next season guaranteed. I'd tell him that I believe in him and want to make him a focal point of my team and that he should prepare for this in the off season. During the off season, I would work out a 2 week session with Karl Malone, where Derrick could go train with Karl in the mountains, shooting deer, talking hoops and working on technique, not unlike the training course Deron Williams had with Stockton.

At worst, Favors would learn the importance of a good screen:

Or maybe at least some good hunting and fishing tips.

At this point my plan is to start Derrick Favors next season and transition Enes Kanter to start sometime in the next two to 3 seasons. But I need a third big. I don't know what I will have to offer Paul Millsap in order to stay, but if fair market value (a front loaded 4 year, $44-48 million deal) and the role of primary offensive option of the big men, is enough, then I do that. I think we all know that Big Al is going to get a bigger total offer than Millsap this summer, so if it's just about money and role, I might be able to keep Paul around. If he has more interest in signing elsewhere, I have several other options. Here are my favorites in order:

1. Try to trade for Amir Johnson by offering to take on Linas Kleiza or Landry Fields' contract with Johnson's contract.

2. Offer a 3 year, $15-18 million deal to Samuel Dalembert or Zaza Pachulia. These two players can contribute, start some games, but more importantly, won't complain about sharing minutes with Derrick Favors and Enes Kanter. They are used to playing 20-25 minutes a night and possibly not starting.

4. Try to trade a 2013 first round pick for either Pau Gasol, or Zach Randolph, depending on their availability.

5. At worst, I am signing a mediocre big man to a mid-level contract over 3 years and throwing Favors and Kanter on the floor together for 35 minutes a night. That's the worst case scenario.

Next I'm shoring up the wing and the point guard positions. I'm pulling Gordon Hayward aside and telling him that he will start at one of the wing positions next season, if I have anything to say about it, and to prepare himself for it. If Marvin Williams opts in, like I think he will, I really like the defensive potential of a Hayward/Marvin pairing. If Marvin opts out, I would try to re-sign him to a deal around 3 years, $15 million. Tony Allen is also an option at mid-level money and would make an interesting pairing with Gordon Hayward. But I'm thinking defense here.

As for the point guard position, my first job is to find our long term point guard option. That is going to be done in the draft. I've already mentioned this, but you can find good quality starting point guards in the second half of the first round. I'm deciding who I think is a starting caliber point guard in the future and I would draft that player with one of my first round picks.

The other way to get good value for my pick, is by drafting a foreign prospect that can develop overseas before coming over to the NBA to dominate, just like Ante Tomic will one day in the next 7 seasons. The main reason is that my roster is already looking very youth-laden and I am not really interested in bringing in two rookies next season, especially when neither will probably see the floor. But I've just increased my international scouting for this very reason. Also, my favorite point guard prospect may be foreign, allowing me to draft an incoming small forward or 4th big, other positions of need for the future.

Unfortunately, under almost any circumstance, I cannot start that point guard next season. That would just be too much. But the point guard position would be a great time to bring in a veteran presence. I'm looking for affordable veteran point guards who can play for the next 1-3 years. Here are some names to consider:

1. Offering to take either Luke Ridnour or Kirk Hinrich off the cash strapped Minnesota and Chicago teams. They each have one year left on their deals at about $4 million.

2. Jose Calderon, Beno Udrih, or Jarrett Jack would all be nice players to have on 2-3 year deals around $5-6 million a year.

3. Mo Williams is always an option, although I wouldn't offer him a dime or a day more than 3 years, $15 million.

4. Call John Stockton and see if he's got one more run in him.

Admittedly, the Jazz are in sort of a tough situation in the point guard department. But they've got to draft one this year, I think.

At this point, in my ideal world, my payroll is looking something like this: 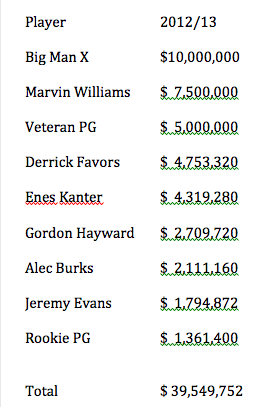 I still need to sign 4 free agents and I have to spend at least 90% of the salary cap (probably about $54 million). To preserve my future flexibility to extend my young guys, I'm either overpaying on one year deals, or staying near the salary floor of $54 million in order to keep costs low. It's smart, not cheap.

At this point, I need a 4th big, two wing players (one could be a combo guard), and a third point guard. More names to consider:

JJ Redick-4 years, $20 million. Redick should be a Jazzman, but he's probably too sought after to be worth it.

DeMarre Carroll- 2 years, $5 million. This would appeal to most Jazz fans, I think.

Randy Foye- 2 year, $6 million (might shy away from this. I don't want him starting).

Pachulia and Dalembert- see above.

Michael Stockton- I don't see why every Jazz fan wouldn't be for this move.

So there you have my plan. It could be horrible. Maybe you think it is. i might be putting too much on Gordon Hayward. I might be expecting too much from Coach Corbin to use an offensive system to plays to my team's strengths. Let's discuss in the comments. What would be your first moves as Jazz GM?