NBA Playbook for Dummies: The Flex

i.e. the offense the Good Lord meant to be run by the Jazz

Share All sharing options for: NBA Playbook for Dummies: The Flex

The Flex is an old scheme. Though he didn't invent the offense, Dick Motta developed it and made it synonymous with the teams he coached. He ran it as a junior high and high school coach in Grace, ID (population, (pop. 761) , as a college coach (Weber State), and in the NBA (Bulls and Bullets among his best teams). He even won a championship with it while coaching he Bullets. It came to the Jazz via Phil Johnson (a player for Motta's junior high, high school, and college teams and later Motta's assistant coach at Weber) and Jerry Sloan (his best player on the Bulls).

Here's how Hollinger described the Jazz Flex offense in 2008, "this team [Jazz] is a layup machine ... Utah's offensive system is an unorthodox one by NBA standards, relying heavily on off-ball screening and cutting to get players open near the rim for short-range shots. It produces lots of layups and free throws."

The Flex requires all players to pass, set screens, and move without the ball. It also requires players to run prescribed routes. This is why Jerry Sloan couldn't handle Gordan Giricek; he would abandon his routes and move to spots that seemed open. A great idea if your team plays "random basketball", but not if you're trying to run the Flex.

Here's the most basic Flex set (from iHoops.com)

Also notice that the pattern gets predictable really fast. You will never see an NBA team just run this set over and over like this. There are variations.

Here's a terrific video of a bunch of kids running several variations.

Now I have created a series of epic playbook graphics that show an example of a Flex variation that we Jazz fans should recognize instantly: one of many possible ways to do The Curl. It starts with baseline movement, just like the basic set calls for: the man at the three-point line cuts to the hoop while the guy on the block sets a screen. The variation begins when the guy with the ball keeps it instead of passing it to the guy on the opposite elbow. 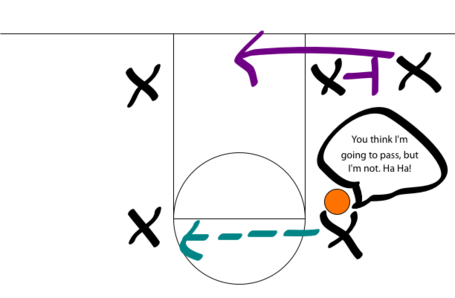 More variation now: the off-ball guys on the weak side move along the key. But instead of screening for each other and switching places, they cluster together. 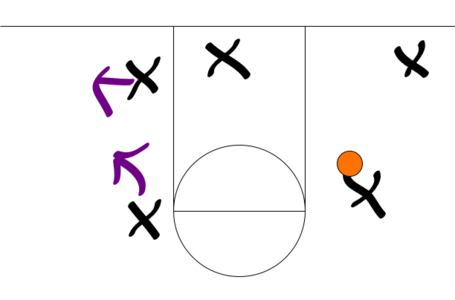 Now clustered, the two guys on the weak side set a double screen, which allows the baseline guy to curl around and lose his man by the time he gets to the free throw line. 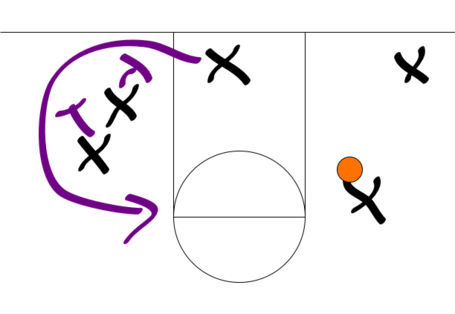 As long as he runs the route correctly, he is now open to receive the pass and get an open jumper. 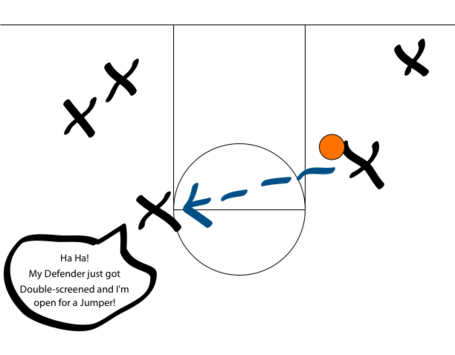 There are a gajillion more variations. This is why Big Al freaked out when he learned how big the Jazz playbook was way back in 2010. But the fundamental aspects are the same:

1) Use screens, off-ball movement through prescribed routes, and crisp passing

Finally, here's a video from happier days: My Deron is Ninja video. But I'm not showing this to make everyone depressed, though it may do that to remember what a good basketball team looked like. I'm showing it to show the Flex in its glory.

Specifically notice the highlights I pulled from the Jazz in their half-court offense. Look for the horizontal cuts along the baseline and the vertical cuts along the key.. Notice the cuts even when Deron decides he's open and takes the shot himself. They're everywhere ( (eg. At the 3:35 mark Deron makes a crazy move behind his back and then fakes a pass on his way to a layup. It's so easy to miss that Boozer's cutting on the other side of the key and Millsap—I think—is doing a baseline cut at the exact same time.)

P.S. I'll have to pull this video out again when I write about correctly running a damn fast break.

P.P.S. This post is one of many I'm writing based on a request from Augustine08. Thanks for the requests, it gave me something really fun to write about.