Once again the starters started dead in the water and every Buck starter out hustled every Jazz starter, blah blah blah more of this until 4:46 left in the 1st quarter when Favors entered the game. The Jazz bench came in and instantly there was a change in energy and the Jazz took the lead.

Enes Kanter looked like a very nice #3 pick. I freaking love me some Enes Kanter. Enes was 6/6 in the first half with a whopping 13 points in nine minutes! Enes finished 7-9 from the field and 3-3 from the stripe for a total of 17 points. Enes also finished with 5 blocks, 9 rebounds (5 offensive, 2 assits and only 1 foul! Enes did all of that in just over 17 minutes! 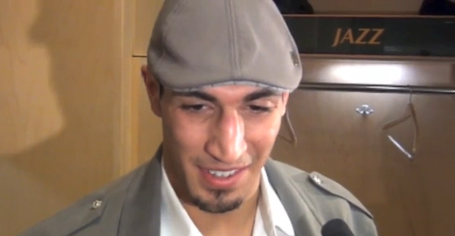 Burks was again played big minutes at point guard. Bill Oram wrote a nice piece about Burks experience so far at the point.

"I told him to just be aggressive," said Watson, who was a game-time decision Wednesday against the Bucks but did not play. "Don’t try to run the offense, don’t play the way you see anyone else playing, be who you are."

With injuries to Mo Williams and, for the last three games, Watson, Burks has been forced into big minutes at point guard. The results have been mixed, but Burks has largely received praise from his teammates and his coaches. The second-year guard from Colorado, however, has seemed unaffected by all the talk about his game.And then, perhaps, the most important nugget: "You can’t sit there and be a pass-first point guard if that’s not who you are."

"You can change," he said, "but you still got to play your game. You don’t want to be too much of a robot out there."

Bill said that kind of goes against Ty's advice

Watson’s advice veered slightly away from what coach Tyrone Corbin has said in recent days, including that Burks had to alter his game to succeed in this new role.

Who's advice do you agree with Watson's or Ty's?

And do you like Burks at point guard? Ty said they don't plan on using Burks as a fulltime point guard in the future.

I am proud of the Jazz for taking advantage of the easiness of their schedule this last month. Is the ESA once again becoming a hard place to win? I don't know if we have the best home court advantage anymore, simply because our arena always looks half-empty now-a-days. I do think players are gaining that confidence though that they can always win at home!

My question is why is the arena so empty?

I hate seeing the ESA so empty, its really depressing. I mean who wants to see green seats? Growing up and really before the last few years it seems like if we didn't sell games out we were always dang close, it felt like you could count on your hands how many empty seats there were.

I remember my senior year in high school, I really really wanted to go the season opener. So my dad and I drove to the Delta Center to buy tickets. I don't think at that time you could buy tickets the day of the event at Smiths. I could be wrong but for some reason we drove downtown to buy our seats. I also really really wanted to sit in the lower bowl, to that point in my life I had never sat lower bowl. Anyways when we got to the ticket office, the lady told us that she had two seats left in the lower bowl, but they were on opposite sides of the court. She had a few available together in the upper bowl but that was it for the lower bowl. I so wanted to sit lower bowl that I convinced my dad to get them and we'd still have fun. So off we went and sat apart for the 1st half of the game. My dad came over to my seat at halftime, a nice man who was sitting next to me switched seats with my dad so we could sit together the remainder of the game. That game was sold out, there were no empty seats and the arena was loud. 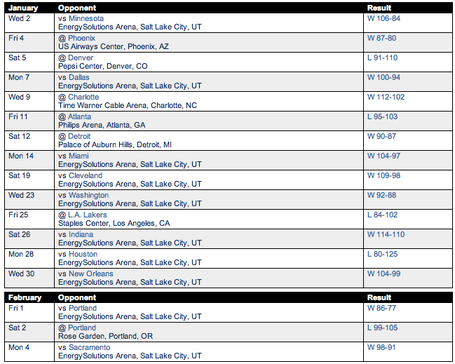 Mo has been out a long time. In fact the Jazz have now played more games without Mo (26) then they played with Mo (24).

Does the fact that the Jazz have a better record without Mo mean anything? I don't know what it means. I haven't ever been a huge Mo fan but it seems like maybe just maybe he's not as vital to the Jazz's success as some may have thought coming into the season.

Matt Harpring has Mo as his 5th most valuable free agent point guard available this summer. Do the Jazz see Mo that valuable, do they re-sign him?

Distinguishing between the two differentiates the good basketball Web sites from the bad sites.

But figuring out who is available is not rocket science if you speak to the right people, and I speak to a lot of plugged-in people on a regular basis.

Here is the latest they are telling me: The San Antonio Spurs are the front-runners to land Al Jefferson in a trade with the Utah Jazz

I highly doubt that anyone who is an "insider" with the Spurs or the Jazz would talk but lets say for some odd reason that there is truth to this rumor would you trade Al to the Spurs?