Share All sharing options for: NBA Experience: Reviewing the 2010 and 2011 NBA Draft Classes

The Utah Jazz of the olden days never had high draft picks after #13 Karl Malone and #16 John Stockton starting running things. And because we were a perpetual playoff team we ended up having to trade up to get Deron Williams at #3 back in 2005. And the winning continued after that. Our front office has done a good job of making sure we don't take on horrible contracts, and maneuvered to be in place to get four lotto picks (through various trades, one was a trade for a pick after the draft in Derrick) in two consecutive years. (It could have been 6 in three if we missed the playoffs last year and dropped that one game to the Golden State Warriors . . . but hey . . . that's the Jazz in an alternative universe) We have four potential studs right now in Derrick Favors (2010 pick #3), Gordon Hayward (2010 pick #9), Enes Kanter (2011 pick #3), and Alec Burks (2011 pick #12). Also thrown in for good measure we still ALSO have Jeremy Evans (2010 pick #55). AND Ante Tomic (2008, #44)! Whaat? Ante Tomic? You gonna bring up Ante Tomic in 2013 man?

Most of us fans aren't completely satisfied with mediocrity. The prospect of greatness (or at least, greener grass) is exciting and encouraging. You may not agree with me, but take a look at all the empty seats at home games, and take a listen to all the cheers when our young guys are in the game. But that's crude to bring up. I'm not going to talk about how the younger guys should play more. They should. And I've explained myself quite a bit. Let's instead look at something called objective evidence. Evidence in this case being . . . well . . . the quantitative data of total career minutes, and average career minutes by draft grouping.

Let's take a look, it could be fun. And draw your own conclusions as to why this is, and if this is a good or a bad thing.

In this class we have ended up with Favors, Hayward, and Evans -- and you can check out the entire class here. This class is headlined by John Wall, Greg Monroe, DeMarcus Cousins, and Paul George. I think that this class SHOULD also include our guys as the best players. We've seen flashes of that . . . but let's take a look at their minutes. 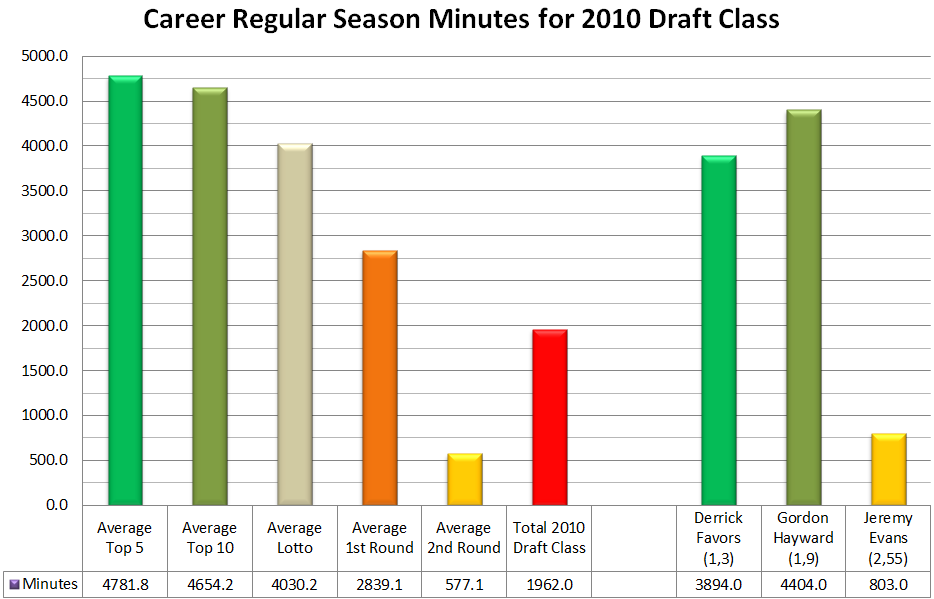 Okay, so the good news is that Evans is ahead of the curve for the average 2nd rounder. The okay news is that G-Time / Precious / H20 is pretty much right on schedule, though his MPG has gone down this year. The bad news is that Favors is like 1000 minutes behind where he should be. That's not compared to other #3 picks (like Michael Jordan or whatever), that's just compared to his own draft class. So that kind of sucks. That's not me saying "he should play more." It's me saying "he has quantitatively played about 1000 minutes less than his grouping." It's not like he's been injured a lot either. He hasn't. This is his third season, and his year by year numbers for MPG goes as: 19.7 mpg, 21.2 mpg, and then 21.8 mpg. So there's that. At least it's going up.

In this class we have ended up with Kanter and Burks -- and the entire class can be found here. This group is led by Kyrie Irving, Klay Thompson, Brandon Knight, and Kenneth Faried. None of our '11 guys made the Rookie / Soph game. And last year Favors only made it as an injury replacement to Tiago Splitter. So, let's move on to the numbers. 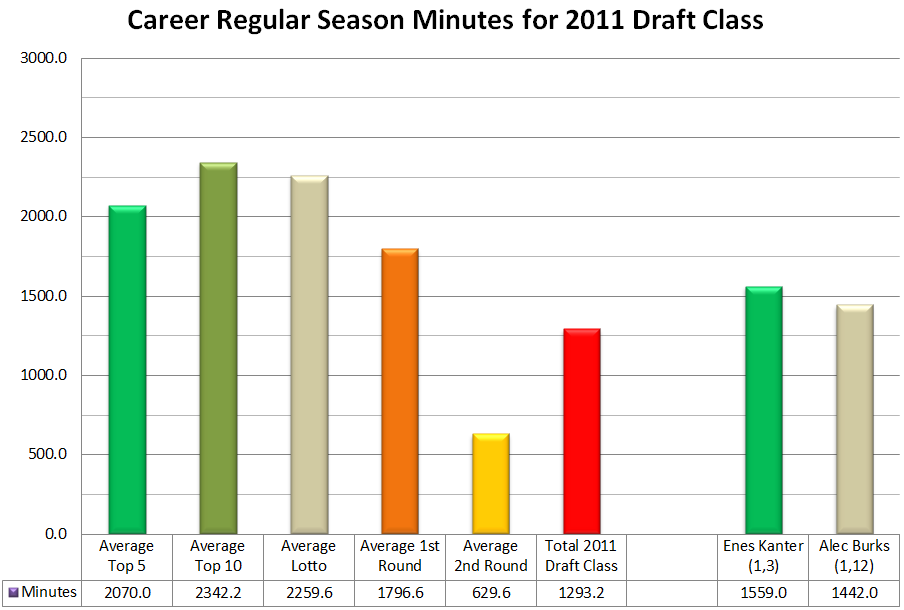 Well, Burks is over 800 minutes behind the other average lotto picks. Kanter is about 500 minutes behind. So, we know that Burks is the worst player ever so that makes sense. Kanter has only been playing basketball for like 3-4 years of his life. As a result, those 500 minutes would pose a larger percentage of his entire career's worth of basketball playing than normal for an American college player who is now in his second NBA season. Please also note that the Top 5 grouping here in 2011 includes Jonas Valanciunas who has only played in 31 games because he was in Europe last year. So in reality, Kanter is a little behind. (Jonas PLAYED professionally for longer than Kanter did, and Kanter had one year in Kentucky where he didn't play at all)

But that's just my idea . . . maybe he's perfect where he is as the seldom used second big off the bench here behind some really studly bigs. We know that Al Jefferson is a great team mate, but not a real first option. Paul Millsap remains to be one of the most amazing players the league has. The point is that compared to their peers by grouping (Top 5, Top 10, or Lotto) our younger four guys are a little behind (or a lot behind if you look at our #3 picks).

Why are they behind? Should they play more? Does it matter if, eventually, in their 3rd or 4th year they finally "start"? Will they feel loyalty towards us if we systematically slowed down their development, earning potential, and career popularity? These are all somethings for you all to debate for yourselves.

I have my opinion. You now see the minutes facts. Tell me how ya feel.