Share All sharing options for: Utah Jazz Roster Turnover: The Last Five years have seen a lot of change

This season the Utah Jazz only have one guy who has played at least the last five season in a Jazz uniform: Paul Millsap. There are a few guys who have played for us in the last three seasons but among those guys, Earl Watson (PG), Raja Bell (SG), and Al Jefferson (C) are all free agents this season. And in case you forgot, so is Paul Millsap. There looks to be a lot of roster turn over from this season to next as well. Which is really not the Utah Jazz way. If you flip through our rosters from year to year you are overwhelmed by the Jazz' penchant for stability.

Those days appear to be gone. 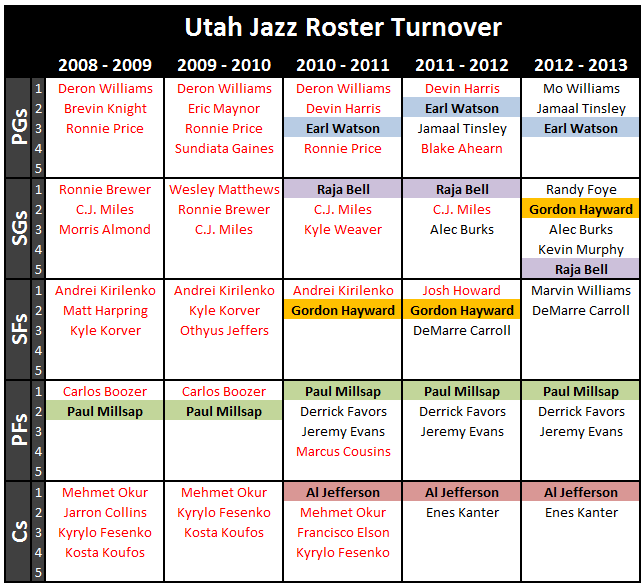 The colored cells are for the most continuity per on court position: Earl for PGs, Raja for SGs, Gordon Hayward for SFs, Paul Millsap for PFs, and Al Jefferson for Cs.

I think continuity is not a bad thing, as it allows you to build off of what you've learned year to year. I also like continuity because it allows for the veterans to be on the team at the same time as the younger guys -- and hopefully they'll impart some of their wisdom to the next generation. Of course, hiring a guy, playing him, and having him leave soon is a more mercenary way to fill your roster -- and doubly bad if they leave without helping out the guys who remain. Over the last 5 seasons there have been 39 different Jazz men. Only 6 are under contract for next season.

We could be seeing more change.