As reported by so many others, specifically Bill Oram (@TribJazz) of the Salt Lake Tribune, the season long non-distraction is finally over. Raja Bell has been waived by the Utah Jazz. He will get paid all of his money. To be fair, the Jazz have played 63 games -- and an estimation of Bell's contract says that he was supposed to get paid $3,480,000 this year. Anyone who knows that we play 82 games this year can figure out that the Jazz and Bell were really at this stage fighting over $806,341.46 at this point in terms of a buy-out. (From twitter, so read from bottom up) 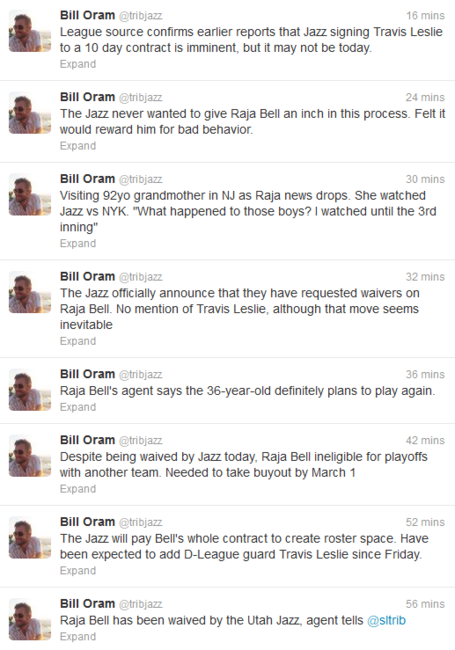 Huge shout out to Bill (whom you should already be following) for getting the straight dope!

Bell will get his $0.8 million for the remaining season we have to play -- giving him the full salary we WOULD have had to have paid him if we waived him before the NBA draft or whatever. But we did play around with the idea of packaging him in trades. We did not actually move him, and were not using him, so now is the right time to lose him.

We should be signing Travis Leslie to the first of probably two 10-day contracts whenever the Jazz feel like it now as we only have 14 guys on the roster. (More on Leslie here)

Raja Bell played 247 total games for the Utah Jazz franchise, and 6703 total minutes spread out over 4 different seasons. He played under Jerry Sloan and Tyrone Corbin. He was a popular player who was a member of that amazing 2003-2004 Utah Jazz team that finished the season 42-40, and just barely missed the playoffs. He finishes with career averages of:

Thank you for your time with the Jazz and thank you for the ways you helped the team -- either through your play on the court, your mentor-ship during practice, and now with your decision to quietly step away from the team. We at SLC Dunk wish you all the best!