Thoughts and observations from her evening at the Jazz/Pistons game, courtside with Utah Jazz owner Greg Miller.

On Monday, thanks to @prodigal_punk (#TPC, #GARF), I was one of the fans picked to watch the Detroit game courtside with Greg Miller. Maybe some of you, knowing how I am, expected me to give Greg a hard time (#UDQM). But having only been a fan since 2006, I don’t have the attachment to or knowledge of Larry Miller like so many of you, and when Greg took over after Larry passed away, I thought it was a good thing. I remember it being something I looked forward to. And other than the whole Sloan debacle, I’ve pretty much been a fan of his. So I didn’t go into this experience trying to grill Greg or make any specific points to him. I just wanted to try my best to make it a fun, memorable experience, and for socially awkward me that mostly meant trying to have actual conversation without freezing up. In other words, I hope you aren’t expecting any hard-hitting journalism here.

When it came time to fill the empty spot, he was very impressed with how fans started nominating each other instead of themselves. Said he’s been really surprised with how close-knit we all seem to be. To which I replied, "Except when we’re at each other’s throats, of course." I explained tweet-ups to him and how awesome it’s been to find other fans to be addicted with. I saw him check Twitter on his phone throughout the night.

On doing things differently than his Dad:

He realized that getting angry and yelling at players not only didn’t help him, it didn’t make anything better within the team. He simply thinks there are better ways to handle it. Plus, he’s not his Dad.

On decision-making within the organization:

He’s only brought in on decisions when they’re ‘imminent.’ "If I get involved in the decision making, then I can’t hold Lindsey or Corbin accountable for what happens. They could just throw up their hands and say they were doing what I said to do. But now, since I’ve stayed out of it, I can hold them fully accountable."

On luring a free agent to Utah:

He said players these days want to win. "So we need to build around our main guys – Favors, Burks, Kanter, and Hayward. We need to use the draft to put the right pieces around them, create a winning team, and then we can get one of those free agents to come here. It’s not going to happen overnight; I think it will take 2-3 more years.

(I asked if he ever felt Rinehart was uptight.)

"I wouldn't say uptight, but he’s not loose. He works A LOT. He works too much. And he takes his job seriously, he is a true professional. He’s a meticulous perfectionist. He’s….sober." 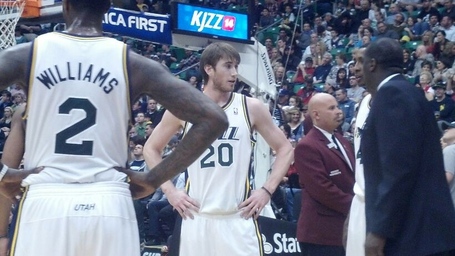 From Our Informal Text Interview:

[Surly]: I will say: we can be skeptical and critical all we want, but every one of those players respects Ty Corbin, so somebody is doing something right.

[Me]: What makes you say that?

[Surly]: They are always looking at him, to him, always listening for what he's yelling. He seems to have their full attention. And of all the people to have an issue with Ty, Burks came over and said he needed to come out; it looked like he hurt his thumb or something. Corbin said, "No, you need to be strong with the [expletive] ball", and pointed him down the court. Alec didn't roll his eyes, act exasperated, or like he couldn't keep going; he just did it.

[Me]: Did you ever feel like he was blowing smoke up your [expletive]? (Note: we swear a lot.)

[Me]: Was it possible he was just talking about the things he figured you would want to hear about?

[Surly]: Sure. It didn't seem that way though. But, if he's that good at what he does, then the franchise is in damn good hands.