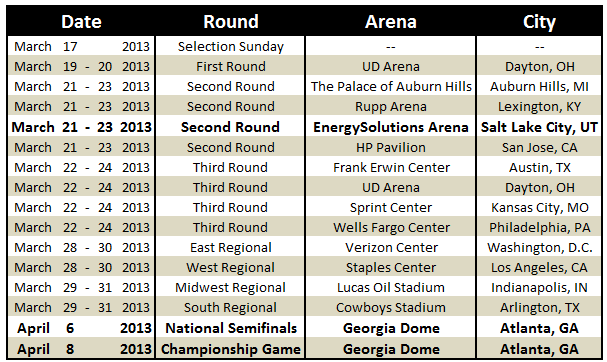 No Purchase Necessary. A Purchase Will Not Increase Your Chances of Winning.

1. Eligibility: The Jazz Fan 2013 NCAA Bracket Contest (the "Contest") is open only to legal residents of the United States and Canada (excluding Quebec) who, at the time of entry, are at least eighteen (18) years of age and are registered members of www.slcdunk.com (the "Contest Site"). Employees, independent contractors, interns, officers, directors, and agents Sponsor, other companies associated with the Contest, as well as the immediate family (spouse, parents, siblings, and children, and their respective spouses) and household members of any of the foregoing, are not eligible to enter.

3. Agreement to Official Rules: By entering the Contest, you indicate your full and unconditional agreement to, and acceptance of, (a) these Official Rules and (b) Sponsor’s decisions, which are final and binding. Winning a prize is contingent upon fulfilling all requirements set forth herein.

4. Entry Period: The Contest beings at 8:43 pm ET on March 15, 2013 and ends prior to the scheduled tip-off time of the first game in the second round of the tournament (currently scheduled for the morning of Thursday, March 21, 2013) after which all selections must be finalized and may not be revised (the "Entry Period"). Entries submitted before or after the Entry Period will not be eligible. Sponsor’s computer is the official time-keeping device for the Contest.

iii. Becoming a Member of the League. Locate the League in the Tournament Site’s Group Directory and click to join.

iv. Creating and Submitting an Entry. Once signed up to participate in the League on the Tournament Site, an entrant must submit his or her "selections" in accordance with the rules of the Tournament Site to predict the outcome of all games in the 2013 Men’s NCAA Basketball Tournament (an "Entry"). There is a limit of one (1) entry per person/e-mail address. Entries will not be acknowledged. The use of an agency or any automated system to enter is strictly prohibited and Sponsor reserves the right to disqualify any entries received through such methods, as determined by Sponsor, in its sole discretion.

6. Selection of Winners: Entrants will earn points for correctly guessing the outcome of each game in the 2013 Men’s NCAA Basketball Tournament, as explained in the Official Rules on the Tournament Site. At the end of the 2013 NCAA Basketball Tournament, entrants will be ranked by the Sponsor, according to accumulated point scores. The Grand Prize winner will be the entrant that accumulates the greatest total number of points on the Tournament Site, from among all members of the League. The three (3) entrants with the highest scores in the League (after the Grand Prize winner) will be selected as First Prize winners. In the event of a tie, the winner will be chosen based on the Tournament Site’s tie-breaking procedures. For additional information on scoring, visit the Tournament Site to review scoring guidelines: official rules. The odds of being selected depend on the number of entries received and the performance of each entrant.

9. General Conditions: In the event that the operation, security, or administration of the Contest is impaired in any way for any reason, including, but not limited to fraud, virus, or other technical problem, Sponsor may, in its sole discretion, either: (a) suspend the Contest to address the impairment and then resume the Contest in a manner that best conforms to the spirit of these Official Rules; or (b) award the prize(s) according to the procedures set forth above from among the eligible entries received up to the time of the impairment. Sponsor reserves the right in its sole discretion to disqualify any individual it finds to be tampering with the entry process or the operation of the Contest or to be acting in violation of these Official Rules or in an unsportsmanlike or disruptive manner. Any attempt by any person to undermine the legitimate operation of the Contest may be a violation of criminal and civil law, and, should such an attempt be made, Sponsor reserves the right to seek damages from any such person to the fullest extent permitted by law. Failure by Sponsor to enforce any term of these Official Rules shall not constitute a waiver of that provision. Proof of sending any communication to Sponsor by mail shall not be deemed proof of receipt of that communication by Sponsor. In the event of a dispute as to any online entry, the authorized account holder of the e-mail address used to enter will be deemed to be the participant. The "authorized account holder" is the natural person who is assigned to an email address by an Internet access provider, online service provider, or other organization responsible for assigning email addresses for the domain associated with the submitted e-mail address. The Contest is subject to federal, state, and local laws and regulations and is void where prohibited.

10. Release and Limitations of Liability: By participating in the Contest, you agree to release and hold harmless Sponsor, its parent, subsidiaries, affiliates, and each of their respective officers, directors, employees, and agents (the "Released Parties") from and against any claim or cause of action arising out of participation in the Contest or receipt or use of any prize, including, but not limited to: (a) unauthorized human intervention in the Contest; (b) technical errors related to computers, servers, providers, or telephone, or network lines; (c) printing errors; (d) lost, late, postage-due, misdirected, or undeliverable mail; (e) errors in the administration of the Contest or the processing of entries; or (f) injury or damage to persons or property which may be caused, directly or indirectly, in whole or in part, from entrant’s participation in the Contest or receipt or use of any prize. You further agree that in any cause of action, the Released Parties’ liability will be limited to the cost of entering and participating in the Contest, and in no event shall the Released Parties be liable for attorney’s fees. You waive the right to claim any damages whatsoever, including, but not limited to, punitive, consequential, direct, or indirect damages.

11. Privacy and Publicity: Any information you submit as part of the Contest will be used for purposes of this Contest and treated in accordance with Sponsor’s Privacy Policy. Except where prohibited, participation in the Contest constitutes an entrant’s consent to Sponsor’s use of his/her name, likeness, voice, opinions, biographical information, and state of residence for promotional purposes in any media without further payment or consideration.

12. Disputes: Except where prohibited, you agree that any and all disputes, claims and causes of action arising out of, or connected with, the Contest or any prize awarded shall be resolved individually, without resort to any form of class action, and exclusively by the appropriate court located in Washington, DC. All issues and questions concerning the construction, validity, interpretation and enforceability of these Official Rules, your rights and obligations, or the rights and obligations of Sponsor in connection with the Contest, shall be governed by, and construed in accordance with, the laws of Washington, DC, without giving effect to any choice of law or conflict of law rules (whether of Washington, DC or any other jurisdiction), which would cause the application of the laws of any jurisdiction other than Washington, DC.