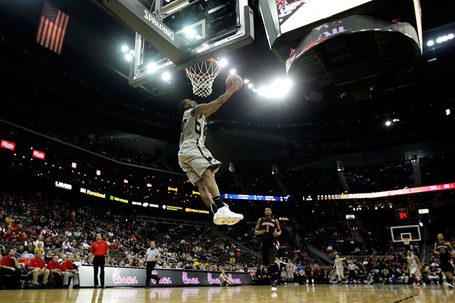 Last year I wrote a fanpost that suggested that if a lottery pick player were to improve from year 1 to 2 or year 2 to 3 that they could expect to improve even further beyond that to have a cumulative PER increase o f6.71 from year 1 to their peak year (Peak PER - 1st year PER = cumulative PER increase). That's good news when we look at players like Hayward, Favors, and Kanter. By this measure we can expect their PERs to peak out at 17.41 for Hayward (he's currently at 17.0 and looks to beat this number at his peak), 20.61 for Favors (currently at 17.8), 21.21 for Kanter (currently at 18.1) and 20.71 for Burks. However, Burks' PER has dropped from a robust 14 in his rookie season to a dismal 11 this year. This is bad news because most players either A) improved by 6.71 PER if they improved during their first years, B) flat lined but stayed in the NBA for a long while, or C) Dropped PER in their early years, continued to drop, and were out of the NBA within 5 years. Right now Burks looks to be in the C category which is REALLY REALLY BAD news for us. I decided to investigate this further since I was beginning to think we only had a Terrific Trio instead of a Fantastic Four to build around.

Now let's analyze this. First thing to notice is that his points and rebounding are down while assists and turnovers are up. The rebounding is understandable because he has played a lot of point guard minutes. The point guard is responsible as the first line of defense in transition, so rebounding isn't as easy to do from that spot. This also explains the assists and turnovers part. Worthy of note is that his Assist-to-Turnover ratio has improved, a very good sign for a young player. The points part is more complicated. If we look at the shooting percentages he has improved across the board. His 3-point shooting has been awesome this year, his mid-range shooting has improved a lot (David Locke has a lot on this part that you should check out), and his free throw shooting is also better (though still isn't at his 80% college number). Why, then, does he score less points? The reason lies in free throw attempts which are down 1.51 attempts per 36 minutes. This accounts for the biggest change in his points output.

The next bit of good news is his scoring efficiency. Both years he posted a points per possession value of 0.87 (league average is 0.91) all the while increasing his assist numbers (thus, in truth being more efficient offensively since he is generating more points for others). Another metric, points per shot has actually improved from 1.17 to 1.20 (1.21 is league average). This is great news because, although he has got to the line less, he is still just as efficient. However, we must remember that this is still below league average efficiency. We hate Big Al because he is inefficient. Well, Burks is still in the same category. Thankfully, Burks is young and has a LOT more potential to improve than Al does (Al has actually got steadily worse every year).

So, Where does Burks need to improve from here? Well, his rebounding is basically the same which is great for a point guard and good for a shooting guard. I don't think he needs to improve there. His 3pt% is awesome, but he needs to maintain this since it is only over a sample size of 36 games. His FT% needs to come up. Bringing it back to his college numbers of 80% will give him 0.5 more points per 36. He needs to attack the hoop like he did his rookie season. This would give him 1.5 more points per 36. He needs to keep improving his mid-range and at-the-rim game to get to a FG% of about 45+. This would give him 0.5 more points a game as well. He also needs to improve his ball handling and passing to about 4-5 assists per 36 and 1.5-2 turnovers. If he did all of these it would increase his numbers to about 18 points a game and his efficiency would boost well over league average. That would be a very solid NBA player.