One step closer to Golden State's pick and a look at lineups. 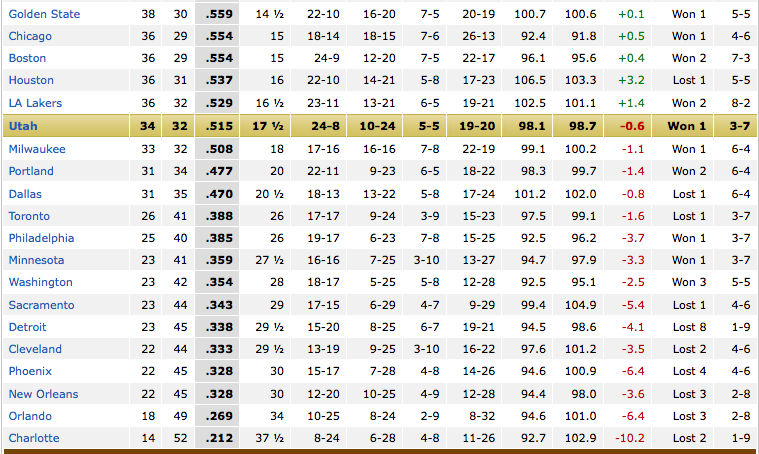 Golden State beat the Rockets last night, which means the Warriors will, at worst, finish 38-44. Well, if you notice, there are already 6 teams that are mathematically guaranteed to finish with a worse record than the Warriors. I mentioned this in last week's downbeat, and now it has become a mathematical certainty. Only the lottery can keep the pick from the Jazz.

The bad news about the Golden State victory, is that they have separated themselves further from our reach. The Bottom line, is that regardless of every other team, the Jazz just need to start winning games. The problem is, that we have struggled to do that this season. It is almost certain that to make the playoffs, the Jazz will need to beat winning teams on the road. But is that really a likely scenario?

Just off the top of your head, how many teams with a current winning record have the Jazz beaten on the road this season? By my count, it is only 2 teams: The Nets and the Lakers.

And if you only count teams that were above .500 when the Jazz beat them on the road, then the Nets are the only team. That is unbelievable. One win against a winning team this whole season. So the next time someone says, "all the Jazz have to do to make the playoffs, is beat winning teams on the road," you can remind them what a tall task that truly is.

Don't get me wrong. I actually believe the Jazz can make a run and make the playoffs. I am certainly not counting them out. But it's going to take much improved play. But the Jazz have one more ace up the sleeve, if you will. The win against Memphis was much needed and impressive. It also marked the official return of the big lineup, which is really Big Al, Derrick Favors, Paul Millsap AND Gordon Hayward. It didn't work when Randy Foye was the shooting guard, but the lineup of those previous four have now played a whopping total of 25 minutes this season.

The ridiculous thing is that it took this long. There really is no excuse for not using this lineup until now. It has only been successful, and in a way, historically successful. It literally saved the Jazz's season last year. Here are the advanced statistical breakdowns of that big lineup from last season:

Just to highlight a few things for you. That lineup played 98 minutes together in only 10 games and outscored their opponents 112.4 to 83 per 48 minutes. That is domination. They didn't do anything particularly out of the ordinary other than grab over 37% of available offensive rebounds and 80% of available defensive rebounds! They basically rebounding the ever loving crap out of the basketball. It makes sense given the personnel, but what doesn't make sense, is that it took over 60 games to see it this season.

So if I were coach Corbin, and I promise you that I am not, I would start some player alongside those four guys. I could probably start Tinsley, or Mo, or Earl Watson, or Alec Burks and get away with it. I would start Burks and just dare teams to try to rebound the ball ever again, but Mo would probably work as well.

But what if that lineup weren't an option. Could we use statistical data to compile other hypothetically successful lineups? I don't know. But I'd like to try. Let's take a look at the big men:

Who should start at the power forward and center positions?

Here are the playing pairs for the bigs for this season: 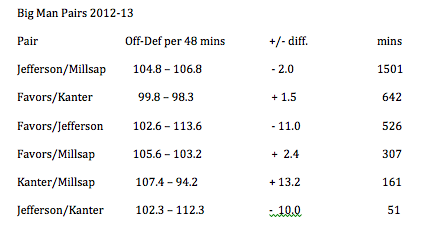 So what do we learn? Well, first of all, the Jefferson and Millsap combo hasn't been awful this season. It hasn't been good. Secondly, Al Jefferson has played terribly with both Derrick Favors and Enes Kanter this season, to the point that Corbin basically refuses to even play Jefferson and Kanter together unless forced to. Lastly, Millsap has paired well with both Favors and Kanter, especially Kanter. Those numbers are pretty astounding, even if in limited minutes.

But is this fair representation? You would think that information like this would be beneficial to both this season and moving forward.

Last season is more difficult to tabulate, because I have shown you how wildly successful the big lineup was, so the pairings will look good. But using the power of math and deductive reasoning, I was able to figure out the playing pairs of every big man pairing, separate from the big lineup. Here are those results: 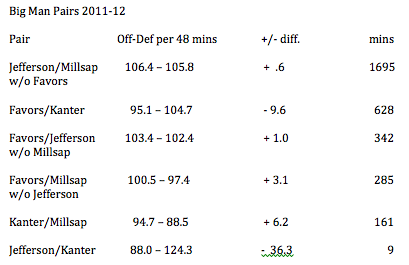 I am really surprised at how well Kanter and Millsap have played for now two seasons. Not a lot of minutes, last season, but still interesting. But the bottom line, for me, is that the best big man lineup is either Millsap and Favors, or Millsap and Kanter, judging from the last two years of data.

So how about the wings? I'm glad you asked. Here are the different wing pairs and how they have played together this season: 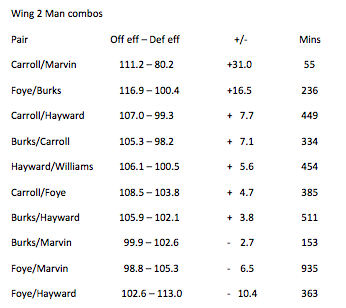 This table is certainly open to interpretation, but I think you have to use your gut and your knowledge of this team to figure out the right balance of production, versus minutes played together, stretches played together and what situations, etc. But I must admit that I am most intrigued by the Hayward/Carroll duo and Hayward/Marvin Williams duo as starters. I am also encouraged by the play of Hayward and Burks together.

And as far as point guard goes, we all know that the team has played better with Jamaal Tinsley rather than Mo Williams, even though there is a general uneasiness among some fans and Jazz brass to starting Tinsley over WIlliams when Mo is healthy and available. I do not share that uneasiness. Which leads us to my top 5 favorite favorite Frankensteinian hypothetical starting and crunch time lineups:

So what do you think? What lineup do you start for the rest of the season, if you are coach Corbin. Correct answers will get recs and pats on the back from internet friends.