I'm not going to lie, very few teams that are schedule for the 'Texas Triangle' leave the Lone Star State with three wins. Beating the Houston Rockets, San Antonio Spurs, and Dallas Mavericks one after another is never easy -- it wasn't easy in the Hakeem Olajuwon / David Robinson / Roy Tarpley days -- and it's not any easier in the James Harden / Manu Ginobili / O.J. Mayo days either. Compounding the schedule severity here happens to be the fact that, well, we're just not a very strong road team. We even lose road games to lottery teams.

Tonight we tip off to face the Rockets, who served us a great humiliation last time we played. Then we face the Spurs two nights later -- and they destroyed us in the playoffs last year when we were playing at our best. The last game, another two nights later, has us playing against nemesis Dirk Nowitzki and crew. These games are going to be difficult. But it's important to remember this: just because something is difficult,doesn't mean that it's not worth doing.

We have a team that's finally healthy for the first time in eons. We have a unified goal of making the playoffs, and while the Los Angeles Lakers have turned it on of late, we're only 1 game back of them, and 2 games back of Houston. Tonight is a big game, and despite our recent play -- we're still a capable basketball team. Last season it looked grim in March as well, but when the rest of the world counted our guys out, our team got the job done and made the playoffs. It's grim now as well, but it's a little premature to call their time of death.

At the end of the day you have to look at why you are a fan of something. In my case I'm a fan of the Utah Jazz because I think they are a good franchise, they have an admirable history, some of the best ever players and coaches, and they make me happy. So I will root for them.

When something you love is hurting, not motivated, and getting dejected because of poor performance and failures -- it's oh so easy to leave them too. But that's not in my character. Right now is when the Jazz need us the most. It's going to be hard for the Jazz, the 2012-2013 Jazz, to step up to the plate and fight hard over this road trip. But they need to in order to stay in the hunt. And right now it's very hard for some of us Jazz fans -- myself included -- to be motivated to continue rooting for a team that is performing poorly and seems mired in no-mans-land in the big picture. But just because it's difficult doesn't mean it's not worth still fighting for.

And we fans are a product of that heritage and quality of character.

I feel bad when we lose. Our team does too. It's easy to be negative now, and it would be easy for them to stop caring, and play not to get injured before free agency. But we're the Utah Jazz. "Easy" isn't in our vocabulary.

And seriously? If you can't get up to fight against former Midwest division rivals in Houston, San Antonio, and Dallas -- then someone needs to check you for a pulse.

These are going to be tough games, on the road, against some well built teams. But if we're going to ultimately fail in our quest this year, we're not going to do it by giving up. We're going to die the hard way. 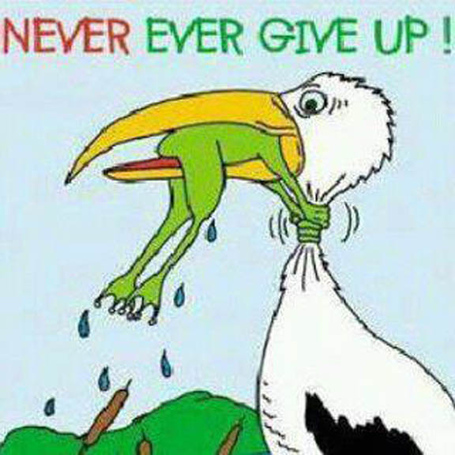 And seriously? The attitude shouldn't be "oh, we are going into Texas we should be scared," no. It should be "crap -- Utah is coming to town. We'll be lucky to get 20 rebounds tonight." The season's not over yet. In a way, the fight to save the season starts tonight.