The Jazz fall short in their comeback against the Houston Rockets. The 4th quarter was fun to watch lead by Hayward, Burks, Favors, Al and Marv.

This girl forgot she had the downbeat! Usually done on Wednesday night ready for Thursday morning, not this week, sorry its late.

Another Wednesday night game, another loss. Remember when all I had to do was write downbeats after wins. Those were good good days. Last night after the game I kept thinking we won, I had the same feelings I normally have after a win. I had to remind myself nope a 4th quarter comeback does not count as a win, the Jazz are now a game and a half back of the Lakers, still in 9th. I kept having to remind myself because somehow it felt like a win to me. (And I don't ever believe in moral victories with the Jazz so it was very weird!)

For 36 mins the Jazz looked dead in the water, there was no ball movement, there was no player movement there was just the typical stand around, iso, turnover offense, Ole defense, make everyone else look like an All-Star Jazz game. Then the 4th quarter struck and something changed. The Jazz had energy, they had ball movement, they played gulp defense (until the game was cut to 5 and Al let Lin go right by him on consecutive possessions for easy layups) it was a team that I could love and enjoy watching. I want to know WHERE HAVE YOU BEEN THE LAST MONTH!

Hopefully this is a sign of good things to come. mix-matched lineups, no hockey substitutions, execution on both ends, hopefully. Then again thats what we were saying after Memphis right, well I wasn't but you guys probably were. (I was enjoying a weekend without kids with my lou)

Anyways here we are in the standings, lets hope we can move on up soon

Hayward was a big part of the comeback effort last night. Hayward has been a player that I have always wanted to see lead the team. I didn't like how he was treated by Deron. I don't like how his role has been messed with so much over the last three years. I do want him to be a Jazz player for life. I like Hayward a lot. Hayward brings so many intangibles to the team. Hayward can do things on the court that we haven't had since AK. (AK imo is one of the most under-appreciated Jazz player in Jazz history) Hayward makes the passes that wow you, he can get our team into the offense, you don't really worry about turnovers like we had to with AK at times. Hayward doesn't get intimidated by his opponents or where he is playing. No one can question Haywards desire to win! Hayward is the kind of guy you want leading your team.

Interesting conversation between Peter and Jeff this morning: 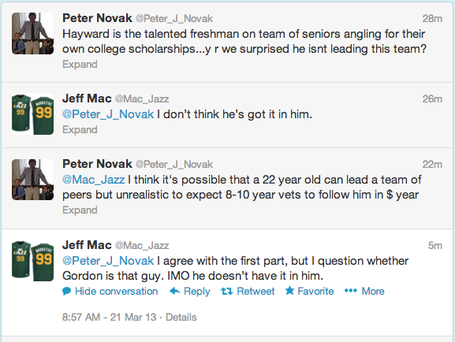 Is Hayward our leader going forward, or is he not cut out to lead? I agree with Peter. How do you feel?

If you haven't had the chance make sure to check out Clark and Andy's recap of the game last night. I enjoyed listening to it. They bring up some good questions. I chimed in on twitter and they were kind enough to answer my questions.

Andy said that Ty is a good systems coach. I nearly choked when I heard that. I trust Andy and respect his opinion so I didn't just blow it off thinking oh that crazy kid, he doesn't know a good system if it bit him in the bum! I instead asked him on twitter what systems?

Andy said that the bench plays parts of the Flex on offense and our defense improves without certain players on the floor. (He said it much better, listen to the podcast)

So that brought up me asking is it because of Al that we don't see these systems. I believe they both answered yes. But then they said they'd bring Al back for 8 million so that confused me.

Andy and Ty also brought up a good question about why Ty doesn't play the Big Lineup which has been highly successful. They talk about how Locke says he knows things fans don't of why Ty plays and doesn't play certain lineups (that's another great discussion and we should write a whole post on it). They said maybe its because Sap doesn't want to play the 3.

Do you think we don't use that lineup because Sap doesn't want to play the 3 or another reason only known to Ty and Locke?

Do you think Millap would rather play the 3 or come off the bench?

So Moni posted awesome pics on her recap of last nights game. (she always does!) JE Skeets (of The Basketball Jones) even tweeted one out!

This one caught my attention: 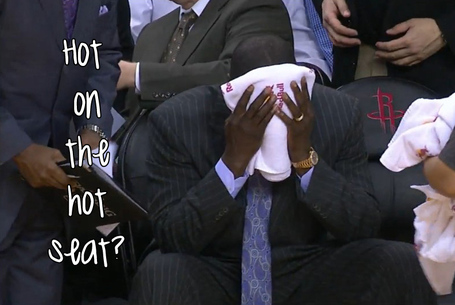 On a scale of 1-5 how much are the Jazz listening to Ty?

5. The players listen to Ty just as much as Stockton and Malone respected and listened to the HOFer Jerry Sloan.

4. The players listen to Ty as often as Karl Malone mumbled at the free-throw line.

3. Who couldn't listen to the Original Milkman

2. The players listen to Ty while sitting in their lockers and headphones on music blasting

1. The locker room is full of Raja Bells

The ESA is home to some March Madness games this weekend, including Gonzaga game(s). David Stockton (son of John Stockton) is excited to play in the ESA. Kurt Kragthorpe of the tribune has an excellent article on David Stockton coming home.

Here is Gonzaga's coach on David:

"He’s fearless, like John," Gonzaga coach Mark Few said. "He has an incredible, innate feeling for the game that he can make passes into the smallest of windows. … He has a great knack, just like John did, off the ball on defense for making plays. It’s uncanny."

There's a fun story about David breaking his collarbone while at the Delta Center during a Jazz practice, go check it out. 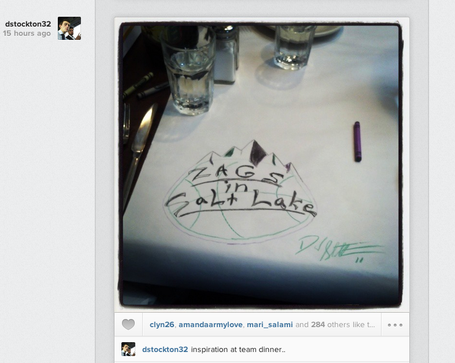