NBA History: Why don't we include playoff numbers to individual statistics, and a re-ranking of All-Time Assists

Share All sharing options for: NBA History: Why don't we include playoff numbers to individual statistics, and a re-ranking of All-Time Assists

Not everything the NBA does makes sense to me. One of the things that does not make sense is the complete statistical divorce of playoff numbers when talking about what a player has done over their careers, nay, their legacies. In a way the only thing that seems to matter about the playoffs years after you retire is if you won the title or not. That is totally a fair way to look at it, but at the same time kind of non-nonsensical. Any metric that propels a guy like John Salley or Robert Horry to God-tier level (look at all the rings they have) while they were 5th to 8th options on the teams they played for is highly flawed.

Almost as flawed as the insistence that individual records do not include playoff numbers. According to the current way we do things, Muggsy Bogues ranks higher than Kevin Johnson on the scale of All-Time assists, which is limited to just the regular season. That's a product of Bogues having played over 150 more regular season games in their careers. By this total metric Bogues looks superior, despite averaging only 7.6 apg, to KJ's career value of 9.1. Muggsy also played in 19 total career playoff games, but KJ over 100. It's silly and a crime to have KJ be lower than Muggsy here. But, by 'the limited numbers', Bogues is #17 all-time, and KJ is lower than him.

I've spent a lot of time looking at this, and other All-Time lists over the years (after all, that's pretty much where John Stockton and Karl Malone really dominate). And it makes no sense to me to keep separate lists. Or fine, keep separate lists, but name the winner based upon who is the combined all-time leader. If you make the playoffs consistently, or go far in a few of them, that should count over a guy who plays a long time but sucks and played for teams that suck.

So, here's all the data -- the original info, plus the playoff info -- and the new combined list. I used the Top 20 in total assists (not Top 20 in playoff assists), so it goes as: John Stockton, Jason Kidd, Mark Jackson, Steve Nash, Magic Johnson, Oscar Robertson, Isiah Thomas, Gary Payton, Rod Strickland, Andre Miller, Maurice Cheeks, Lenny Wilkens, Terry Porter, Tim Hardaway, Bob Cousy, Guy Rodgers, Muggsy Bogues, Kevin Johnson, Derek Harper, and Nate "Tiny" Archibald. Also, just to be fun, I've included Kobe Bryant here -- a guy who has played a lot, played in a lot of playoff games, and should be an example of this boosting him upwards. 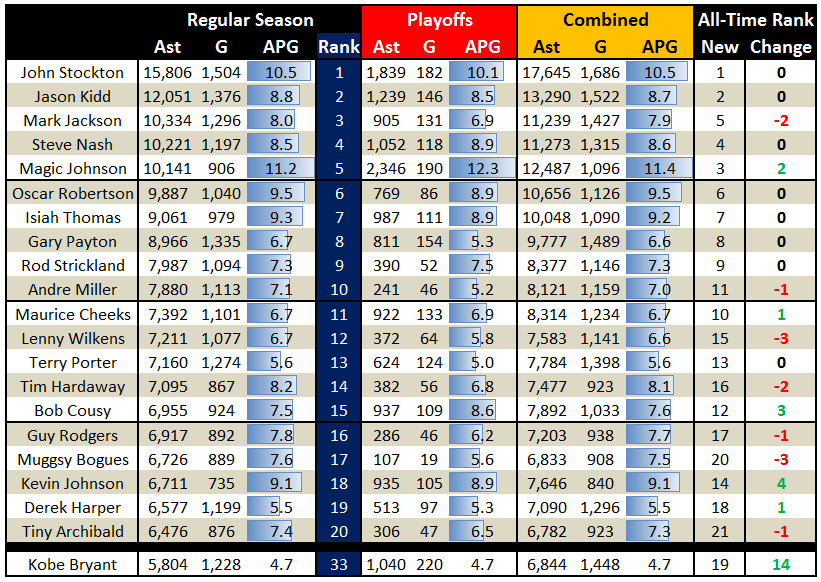 So, yeah, this makes more sense as Magic had over +2,000 playoff assists and it puts him back up to #3 instead of #5. It also drops Mark Jackson down, so obviously, Jazz fans are fine with this. There is more movement at the bottom of this group of 20 than at the top, and that shows how the playoffs should matter. Longevity is a factor here, as well as the quality of your teams. (The changes in how assists are recorded are something I can't help, we all know that Cousy should have over 10k assists, but back in the day if the scorer takes a dribble before shooting, and makes the shot, the passer did not get the assist -- but I can't do anything about that.)

The standard deviation for the top 20 is +/- 1.77 spots in rank. So a guy in this group moves up or down by about 1.5 spots. It's a tight group. And the experimental group, Kobe? He's #33 all-time right now, but if you add assists, he jumps up to #19, that's a 14 spot jump. So that shows the impact of playing a lot of playoff games. Of course, Kobe isn't the only guy who would benefit, other players not on this table who played a lot of playoff games would ALSO benefit: like Scottie Pippen, Clyde Drexler, and this Jerry West dude.

Of course, yes, John Stockton is still #1, but we already assumed that.

I think adding playoff values in these career totals rewards players who play deep in the post season, and are more reflective of the effect they had on the games they played in.