We get Tony Parker tonight; let's see how well we've done over the last 20 games against Starting PGs.

Share All sharing options for: Utah Jazz Defense has been quite poor against opposing point guards over the last twenty games

On any given night the Utah Jazz will start Mo Williams, Jamaal Tinsley, or Earl Watson at point guard. All three of these players were starters or starter level quality at their peaks -- but it would be absurd to suggest that they (some of them coming off big injuries, and at an elderly age) are still at their peaks.

Over the last twenty games the Utah Jazz have won 8 times.

And really, over the last twenty games the Utah Jazz have surrendered an average of 18.0 ppg, 6.6 apg, 4.0 rpg, and 1.7 spg to the opposing starting point guard. I'm not even going to insult you readers with the averages for OUR starting point guard over the same stretch of time. It's not been good. And yes, we've faced Chris Paul, Russell Westbrook, Kyrie Irving, Stephen Curry, and Ricky Rubio -- but during this stretch we have also made guys like Nate Robinson, Isaiah Thomas, and Avery Bradley look really, really good at point guard.

The numbers speak for themselves ... 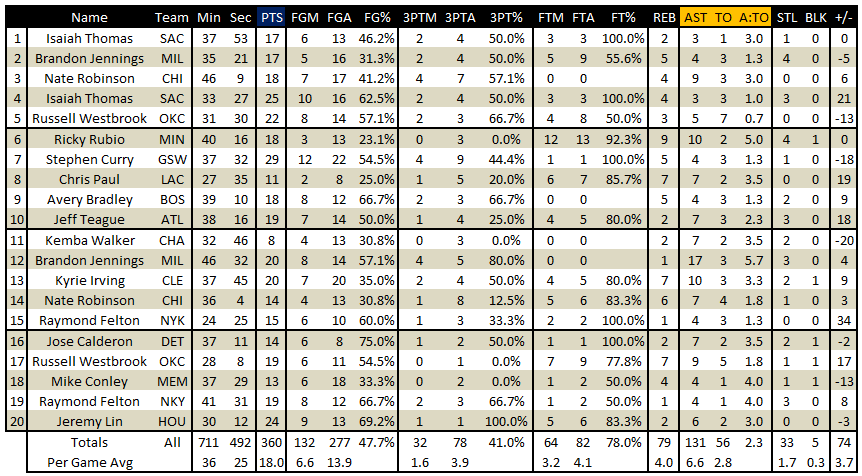 So yes, these are some of the better PGs in the league, but we shouldn't be getting KILLED by them; in some cases the PG has been the only weapon for these teams and the erstwhile target of our defensive attack. I'm not going to point fingers here; but if I was, well, it has to start with the defense of our starting point guards. The defensive scheme, the team defensive rotations and help -- all of that matters. But none of it matters more than the effort and abilities of our starting PGs.

As it stands, they're not so hot this season.

Is there a better option right now on the team to be a legit starting point guard? No. I do not think so at all. Are there alternatives out there to play better defense than those three? I'd think Alec Burks qualifies -- he seems to be able to actually defend the guys these older guys can't stay with. But he's young, makes mistakes, isn't a PG, and he would never be able to get the ball up the court ever. At least, that's how the story goes.

Stories are nice, but realities are sometimes less nice. And the reality is that right now we have trouble playing defense, especially so against opposing starting point guards. The guys we've used at PG to start games all have had cracks at it in the last 20, and in the last 20 games we're giving up 18 / 7 / 4 / 2 ON AVERAGE.

Our PGs can't do it alone (then again, you're kind of on an island on defense when you have Al Jefferson conducting things on defense in the paint), but they still have to hold some responsibility for how things have gone recently.