The Utah Jazz have won 2 of their last 10 games. The Dallas mavericks have won 7 of their last 10 games. One single game separates the Jazz and Mavs in the Western Conference Standings. Over those 10 games the Jazz have managed to dispatch the Detroit Pistons and Memphis Grizzlies, while losing to the 50 years old and up New York Knicks and Cleveland Cavaliers. The Mavs have beat the Houston Rockets, Detroit Pistons, Minnesota Timberwolves, Milwaukee Bucks (on the road), Cleveland Cavaliers, Atlanta Hawks (on the road), and the Boston Celtics.

Using the distributive and associative laws of algebra, we should have our hands full as the Mavs are playing better than us right now.

That said, the Memphis Grizzlies were playing better than us too, and we beat them. So you never know which Jazz team is going to show up. In our last game we almost shocked the world. We're 0-2 on this Texas Triangle road trip. We're pretty awful on the road (10-26 right now, and haven't won a road game since before the All-Star break). But it doesn't matter.

What matters is just getting one game. And tonight is a 'gettable' game. For one thing, Rodrigue Beaubois is out, and he usually kills us. Sadly, we're not going to get much else in the injury advantage. They still have Dirk Nowitzki, O.J. Mayo, Darren Collison, Vince Carter and crew. And they're a lot different from the team we faced in Game 1 of the season.

It'll be a tough game. It may look ugly at times. But I think our team can win. We can win ugly.

We just can't own it like Mark Cuban can, though. 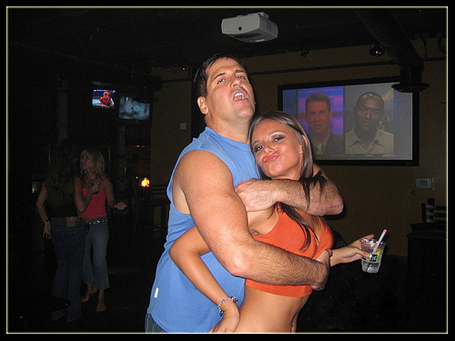