Share All sharing options for: The Downbeat #999 - The Pitiful Success Kid Edition

Is this what it's come to? 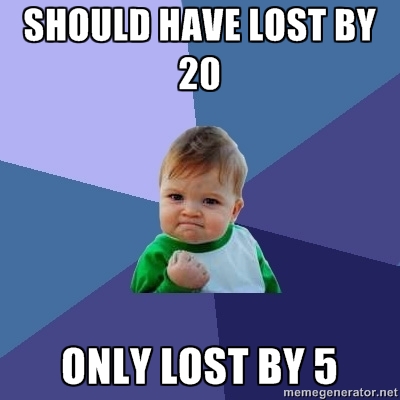 In talking with Ty Corbin it's fairly clear that he feels his team has already started packing for free agency.

Al Jefferson said he feels like Corbin has done everything he can do. It's on the players now, and he's not confident they can make a run.

Honestly, I'm not sure what to make of this. One thing's important to remember: these are no direct quotes, but a journalist's impression of the interviewees' unspoken feelings. And this journalist is also not a guy who interacts with the Jazz every day—so it's very possible he's interpreting things wrong.

Even so, it's not exciting to read at all.

Our weekly look at the Jazz efficiency. To me, these two charts tell us the most important thing about the Jazz this year: 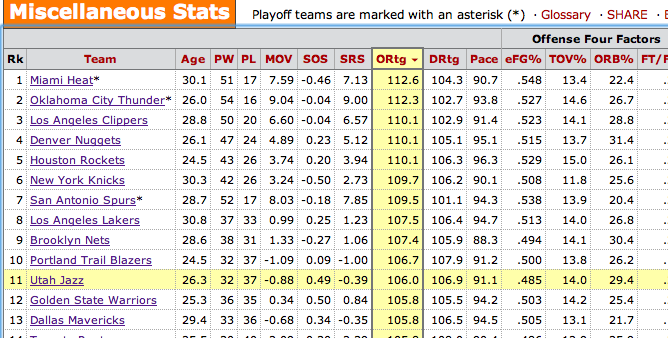 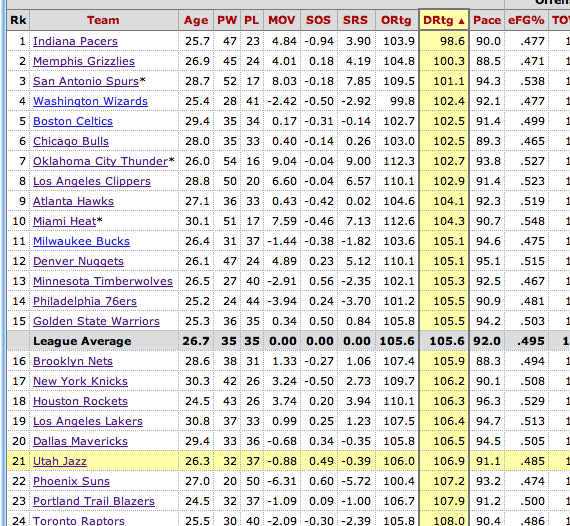 That both the team's offense and defense have regressed since last year is most disappointing and inexcusable to me. When you look at the kind of players the team brought in (intended to maximize the offense based on Al Jefferson), when you look at the kind of progress the young players should be making in their 3rd and 2nd years, this kind of year-over-year regression in both areas is a disastrous, team-wide failure.

It's sad to write this.

Now you get to deal with meandering thoughts regarding the Jazz's home and away records. :)

This disparity in home and road records really interests me—particularly the differences in what kind of teams have a similar record.

I have started to wonder if our location (the altitude, the longer flights in, etc.) gives the team an advantage that exaggerates the team's home record. This possibility seems further suggested by Denver's splits: they have best home record in the NBA and it is very similar to the home record of the Heat, the Spurs, and the Thunder. However, the Nuggets' road record is just 17-19 -- similar to that of the Warriors, the Hawks, and the Bucks.

It makes me wonder if Dennis Lindsey, when evaluating what the team needs to do this off-season, needs to start with an assumption that the team is about 5 wins worse than its overall record suggests.

So what now? The Jazz are tied for 9th place with the Mavs. Although making the playoffs is possible, it grows less likely every day. What do you hope to see accomplished in these last dozen games?

To me the answer is the same as it has always been this season: Build a Foundation for the Team's Future.

Stop looking at only 2013 ... look at 2014, and 2015 (I know the front office is, to some degree, but I have yet to see any sign that Tyrone Corbin can look at anything beyond a desperate, flailing attempt to win the current game). Look at the players who will be here, who are part of the long-term plans, and help them start building some success together.

One of my favorite little anecdotes is about the Dallas Mavericks. From 2001-2012, the team went to the playoffs 12 consecutive times, won 50+ games 11 straight seasons, averaged 57 wins overall, won 60+ games three times, made it to the NBA Finals twice, and won the title in 2011.

All that success began in 2000 ... a year in which they missed the playoffs.

On March 9, 2000 the Mavs lost their 6th straight game, a 21-point blowout at home by the Timberwolves. The Mavs record was 24-37. Over the next 21 games, they won 16 and lost 5. They figured out a game plan that worked. They started building the right kind of chemistry between its two stars (Dirk and Michael Finley). They figured out that Steve Nash was a starter-caliber PG.

In short, they discovered the right combinations that would kick-start a dozen years of elite play.

For whatever reason, I still remember that late-season surge so well. I remember the talking heads at ESPN mentioning the Mavs again and again, and how teams need to watch out for them ... that their future was looking bright.

More than anything else, that's what I hope the Jazz can do in these final twelve games, whether they make the playoffs or not.