"The You've Had a Birthday Shout Hooray! Edition"- The Downbeat #1002

Share All sharing options for: "The You've Had a Birthday Shout Hooray! Edition"- The Downbeat #1002

Leading scorers: Al and Hayward with 25

It seemed to be a balanced attack by the Jazz. Honestly in confessions of confessions I thought most of the game was pretty boring which I didn't ever think possible of a Jazz and Suns matchup. The 4th quarter things changed. The Jazz opened the quarter up on a 10-0 run by playing UTAH JAZZ BASKETBALL!!! There were cutters, there were extra passes, there were beautiful shots as a result of said play! Nice win Utah!

This season hasn't been the greatest Jazz season ever. Favors has his plantar fascitis, Paul and Al matching ankle injuries, Mo his thumb, and now poor Enes. Cute young Enes dealing with an injury.

Get Well soon Enes. We love you, we'll miss you, you are the best! If Dr. Amar would like to address the injury in the comment section or by editing this post that would be appreciated.

Memo Okur attended the game so did Jerry Sloan I miss those guys sooooooo much! What a fantastic era in Jazz basketball was the DWill, Memo, AK and Boozer era. Short lived relatively speaking but so so much fun. Memo was a HUGE part of our success during that time. 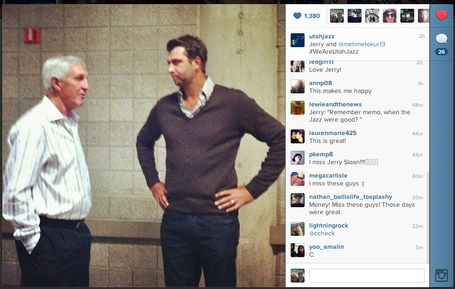 I see those guys and my heart is full. Hopefully soon the Jazz will soon get back to better days.

Today is Jerry Sloan's 71st birthday! Happy Birthday to my favorite coach of all time! We love you Jerry! Yesterday I had fun looking up fun youtube videos of Jerry.

A brand new upload from Jazzbasketball! Jerry and Rick Adelman talking about being teammates.

Remember how everyone thinks Jerry fought the girl ref but it was really a boy but his name is Courtney: * I love love Karl's interview at the end of this video

Jerry Stackhouse liked to pick on anyone on the Jazz. Sloan has had enough:

Jerry Sloan with the very cool, I didn't know that was Cuban, I thought it was some guy in the stands comment:

He was feisty even in his old age: I miss you Jerry. Thanks for being such an amazing coach for our Utah Jazz for so many many many years.

Yes the Jazz have won two in a row but I still think these issues still concern the Jazz.

• A lack of identity

• Lack of focus, effort and energy

• No moves made before the trade deadline

• Mo Williams is not a Jazz point guard

• The cloud of free agency

I think most of this stems to Corbin's coaching ability and lack of identity. Great list by Monson, good things to think about. Most of them yes have been brought up right here at SLC Dunk.

I meant to post this in the DB but forgot. I found it way interesting. Thanks for brining it up the comments so I remembered! 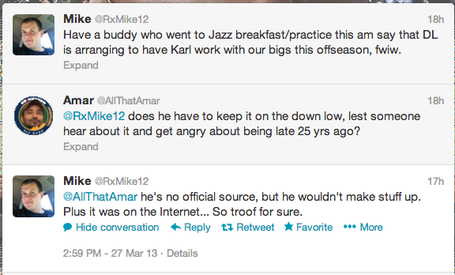