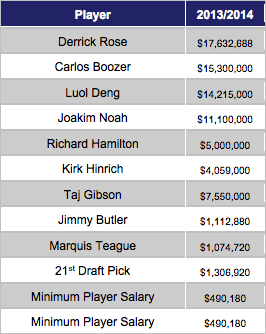 Summary: Chicago is a tad over the luxury tax line this year and is projected to be a tad over next year as well. While this would seemingly not be a problem, the Bulls would no doubt like to get below the luxury tax line at some point in order to avoid the repeater tax. However, as long as the team is competing, ownership appears willing to spend a little extra to compete for a title. You never know with Chicago's ownership, though, who have been known to pinch pennies at odd times before.

Amnesty Candidates: The Bulls could use the amnesty provision on Boozer, Noah or Deng. Boozer however would appear to be the only realistic candidate but he remains owed $32.1mm for the next two years. That amount would be offset by whatever team claims Boozer over the Amnesty waivers, which seems likely as he still is able to contribute, though not at the same level as he had formerly.

Player Options: The Bulls do not have any player options to worry about however the calculation above assumes that Hamilton's non-guaranteed $5mm contract is waived.

Jazz Free Agent Signings: The Bulls would have to do some serious maneuvering to sign either of the Jazz bigs. Alternatively, the Bulls may have interest in signing a shooter such as Randy Foye for the right price.

Jazz Trade Options: Sign and Trades with the Bulls could be worked out provided that at the end of the trade, the Bulls remain below about $77mm in salary.

Jazz Salary Dumps: Any trade with the Jazz would likely be motivated to dump salary. A deal to unload Boozer for Millsap for example could work, however the reasons the Jazz would do that are beyond my ability to comprehend. 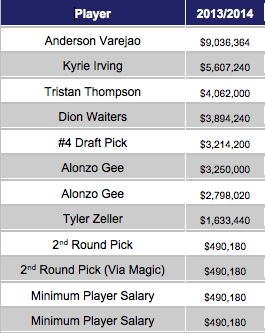 Summary: Along with Atlanta and Utah, Cleveland is set up financially among the tops in the league. The Cavs have multiple needs as a rebuilding team but also have assets to meet those needs.

Player Options: Marreese Speights has a $4.5mm player option and I am assuming he looks to find a long term deal in free agency.

Jazz Free Agent Signings: The Cavs have the ability and perhaps the need to pursue either of Utah's front court stars. While Thompson has made some strides, a third big and potential starter like Paul Millsap would be useful to them. Additionally, if the Cavs move Varejao like was rumored this past year, it would open up a future starting need and allow the Cavs to gain a valuable asset elsewhere.

Jazz Trade Options: Perhaps the only likely trade interest for the Jazz would be Varejao who has two more years on a very reasonable contract. Since the Cavs have the ability to sign a Jazz big without trading us Varejao, it would seem unlikely as the Cavs could probably net another asset elsewhere.

Jazz Salary Dumps: The Cavs have no need to dump salary at this time. 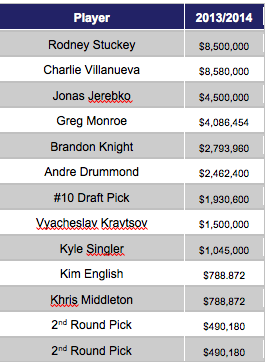 Summary: Detroit is also among the most financially flexible teams in the league next year. I've assumed that they will renounce the rights to Jose Calderon in order to focus on the youth movement but it is possible he is brought back at a lower number than the $10mm he made last year. The Pistons could also easily get up to $30mm+ in Cap Room if they decide to amnesty Villanueva.

Amnesty Candidates: Charlie Villanueva is a prime candidate to get amnestied if the Pistons have a reason to clear some Cap Room.

Player Options: Villanueva has a player option that he will likely exercise and then hope to get amnestied. Rodney Stuckey also has a player option and is only partially guaranteed on his contract next year. It is possible he opts to rejoin the Pistons and then they cut him to save another $4mm.

Jazz Trade Options: Jerebko and Stuckey are both middling players that are overpaid on shorter term contracts. The Jazz may have some interest in acquiring them as a last resort to recover some value should Paul Millsap choose to sign here.

Jazz Salary Dumps: Detroit unloaded Ben Gordon and Tayshaun Prince this past year but may be looking to dump Stuckey and Villanueva. Considering their Cap Room otherwise, they wouldn't be likely to pay significant money. 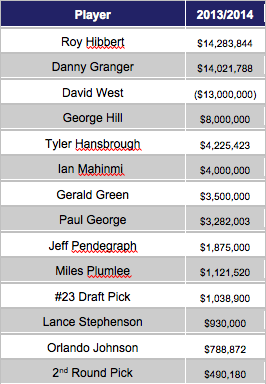 Summary: Indiana will be in an interesting predicament in the Summer. Both David West and Tyler Hansbrough will be free agents and they will have the need to add a starting power forward. I've left the cap hold for David West here, but if he re-signs it will likely be closer to the $10mm he has earned the last few years. It is possible that Indiana lets him go and then decides to dump a salary or two to get in position to make an offer to Paul Millsap.

Jazz Free Agent Signings: The Pacers are one team where Paul Millsap would seem like an ideal fit. As it is now that would require them to walk from the older David West and then have Millsap take a salary starting at $7.3mm which seems low. If the Pacers found a team to dump Mahinmi or Green on, then they would likely have enough Cap Room to give Millsap a competitive offer. As one of the top teams in the East, signing a younger Millsap to replace the older West would be a seamless transition.

Jazz Trade Options: Whatever happens when Danny Granger returns, will likely determine what Indiana does next year. If George and Granger can coexist at SF/SG, then no moves likely need to be made. That being said there could be a scenario where the Pacers would consider a sign and trade of Granger for Paul Millsap. I'm not sure that the Jazz would consider adding Granger considering his large salary and injury prone knees.

Jazz Salary Dumps: If the Pacers want to free some cap space up, they may look to the Jazz to unload a serviceable backup center like Ian Mahinmi, though his $12mm remaining is less than ideal. 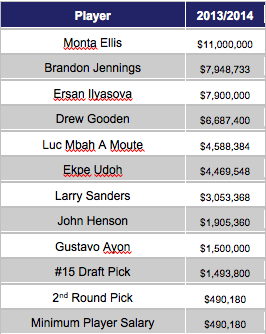 Summary: Milwaukee is at a cross roads this offseason with Ellis and Redick likely entering unrestricted free agency and Jennings being a restricted free agent. For the purposes of my calculations I've assumed that Ellis comes back at his current cap figure and left the cap hold for Brandon Jennings' qualifying offer. If the Bucks were interested in blowing it all up though they could let both guys walk and create another $19mm in instant Cap Room.

Renounced Free Agents/ Cap Holds: JJ Redick ($9.3mm), Samuel Dalembert ($10mm), Mike Dunleavy ($4.9mm), Joel Przybilla ($854k), Marquis Daniels ($854k). Redick and Ellis are likely tied together as I do not see the Bucks paying to bring them both back next year.

Amnesty Candidates: Drew Gooden would appear to be a prime candidate to be Amnestied, if it weren't for the fact that this is one of the most cap strapped teams in the league.

Player Options: Monta Ellis hold a player option and early indications are that he intends to test the free agent waters in order to obtain a long term deal. There is probably not a scenario where both he and Redick return.

Jazz Free Agents Signings: As outlined above the Bucks do not have the cap space to pursue a Jazz big man, but if Monta opted out and they Amnestied Gooden, the team would have up to $25mm in Cap Room. I think Milwaukee makes sense as a prime destination for Jefferson as they desperately need a post scorer to go with their multiple defensive oriented bigs. This may be Jefferson's number one free agent destination.

Jazz Trade Options: If Milwaukee decided to pursue Al, they may want to work a Sign and Trade deal in order to shed salary. Ilyasova might be available if the Bucks wanted to unload his long term contract, but then again he would fit in nice shooting 3's off of Al's post game. None of the other players are likely considered to be upgrades for the Jazz.

Jazz Salary Dumps: The Bucks could be interested in dumping Gooden, Udoh or Mbah a Moute depending on their other offseason moves. The Jazz may be willing to listen for draft pick compensation.