Jazz Bigman Al Jefferson scores points in crunch time, but what about to start games?

Share All sharing options for: Jazz Bigman Al Jefferson scores points in crunch time, but what about to start games?

Okay, in the third quarter last night we were hurting for points. Usually we start our big shift towards Al Jefferson in the third, and then in the fourth. We also wouldn't have minded his efficiency to end this game. Over the last three seasons we've seen Al succeed and we've seen him fail. On offense we have the idea that he goes through some sort of apotheosis into "Al Clutcherson" when the game gets tight.

I think there's some evidence to support that theory, but the one thing which few people have looked at with Al is that, well, he starts poorly. And poor starts are a hallmark for our starters when we're at full strength. (That post can be found here.) Maybe Big Al is part of the problem there? (Not just his poor defense, but his poor offense?) Let's investigate this: 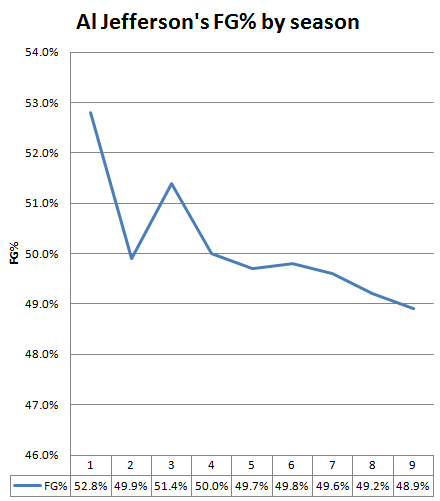 Here is where things get pretty interesting.

Big Al is even MORE specialized here. He's great in overtimes, he's above average to finish games -- but he's absolutely horrible to start. This season he's shooting more in the first quarter as well, and shooting less in overtime. It's remained pretty much the same at the end of the fourth (Jazz career: 2.354 FGA; This season: 2.349 FGA). I'd love to have seen him take more shots when he's killing it; and less to start. And let's be honest here, he's really bad to start. And this year our starters are really bad in the first quarter. So I think it would be fair to put some of the blame on Al. Of course, dude is shooting 56.3 fg% in OT, which is flat out amazing.

But here's the rub:

Does Al's performance to end the game in the 4th, or in OT make up for him pooping the bed to start the game? Secondly, should your #1 option be someone who consistently is performing poorly to start? Well when you break it down we get some interesting numbers. If we compare these six time periods (1st, 4th, and OT for both data sets -- entire Jazz career and just this season) against the expected average (his actual in a Jazz career average of 49.4 fg% -- based on every game in the playoffs, every game in the regular season, every season over the last three seasons, every quarter and overtime played) we can see if he's making up for his performance or not.

If he shot his career Jazz average (49.4 fg%) in OT, he would have made only 0.1 MORE FGM than he actually did over the 14 OT games he's played for us. If you look at just this season, if he shot his Jazz average then he'd be hurting his production. This season in OT he's been money. That said, he hasn't played in OT a lot this year, and has only taken 16 total shots (he's shooting less this year in OT than overall). So while he's shooting much better (56.3 fg% > 49.2 fg%), if he shot his average (49.4 fg%) he would have had -1.1 FGM LESS than he really did. So in terms of OTs from his Jazz career and now, he's better. If you add it up, he's +1.0 FGM this year in OTs. (That's how much better he is THIS year than average).

Let's look at the fourth quarters now. His Jazz career (last 5 mins) fourth quarter FG% is 48.9 fg%, which is less than his total Jazz average of 49.4 fg%. If he shot his career average during this time period he would have made +1.6 more FGM. Of course, Al's shooter better than his career in the fourth quarter this season, shooting 50.5 fg% > 49.4 fg%. If you look at it this year, if he shot his average he would have made -1.2 FGM this year in the end of the fourth. So for his Jazz career if he shot his average it would have been +1.6 more FGM; however, he's doing better this year, and if you add it up, you're at a very small +0.4 FGM. (That's how much better he is THIS year from average)

The two main take aways are that a) for his Jazz career he's pretty close to average during these "more important" stretches of the game, and b) he's been even MORE effective this year during this stretches than vs his entire Jazz career.

That's fine. That's good, even. But let's look at the first stretch, the first 5 minutes of the game.

Again, his entire Jazz career fg% is 49.4 fg%. Over his entire Jazz career to start games he's shooting 46.1 fg%, which is less. If he shot his regular average during this period he would have made a whopping +15.4 more FGM. What about just this season? Well, he's shooting even worse, a pitiful 41.7 fg% to start games. If you look at that number vs. his career Jazz average of 49.4 fg% there's a big difference. He's actually gone 58 / 139 during this stretch; but if he was shooting his "average" rate he would have instead gone 68.6 / 139. Basically 69 FGM. He made 58. Accurately, he's down 10.6 FGM this year, during this time period, alone.

So Al sucks LESS this year than over all compared to his cumulative Jazz career. He makes up for sucky starts by making +2.3 more FGM to end games, which still puts him in the red overall.

I know I've switched the + and - here a bit to end this dialog, but it's clear, if he just shot his average over these "clutch times" we'd be better off. Shooting "better" when it matters is nice, and validates Big Al if your definition of "when it matters" is ONLY the ending of games.

I think "it matters" at the beginning of games. I can't tell you how many blowouts we had because Karl scored 15 or 18 points in the first half -- he didn't HAVE to play in as many close games as Al seems to have to play in. Two points in the first quarter is almost certainly MORE important than 2 points late -- because there's less pressure and it should be EASIER to score to start. Al gets points for degree of difficulty . . . but he dude just shot his average to start games then it benefits our ENTIRE team as we probably don't have to fight for our lives in the 2nd quarter just to stay in the game.

I don't think Al's great shooting to end games this season is sustainable, and the larger sample size of his entire Jazz career (204 games vs. 55) is more meaningful. Furthermore, while this season he makes up for his sucky starts a bit, it's still a sucky start that ultimately dooms our team to play catch-up all game long. He's still on the wrong side of the balance sheet when you look at the start of games against the end of games.

Yes, compared to his average he appears to be "Al Clutcherson,", but to start games he would then (if we've being honest) "Al Craperson." I don't doubt he's a great teammate, an honorable human being, and a loving family man. I just don't think we can say his performance to end games makes up for his performance to start games. It's the same game, and effort in the first half can lead to easy wins.